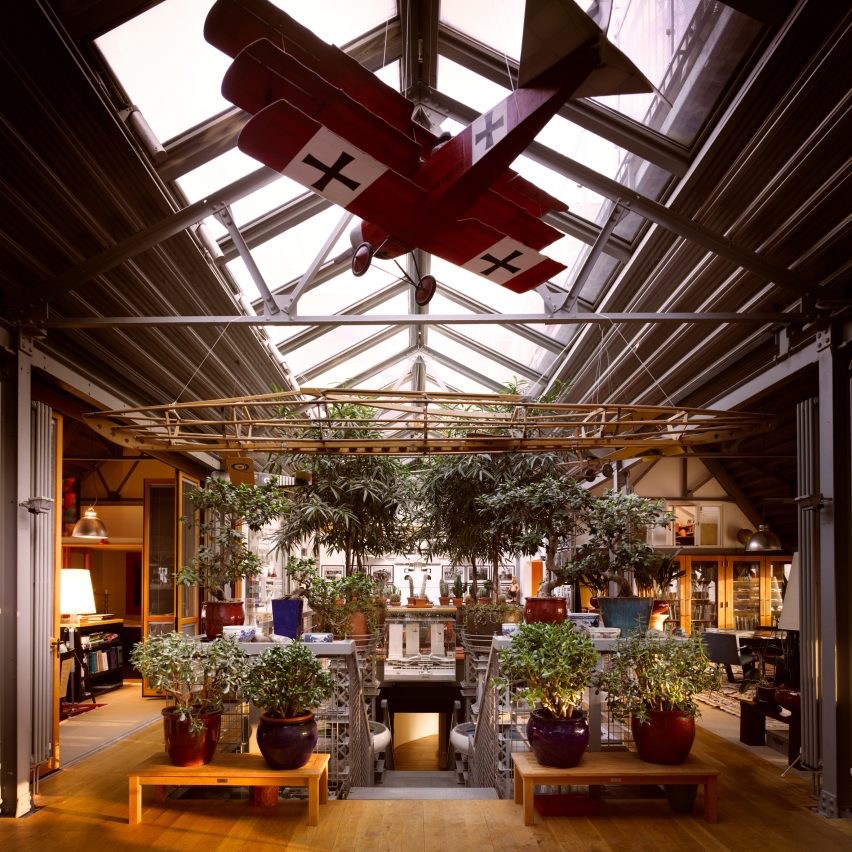 Postmodern architect Terry Farrell is selling the flat he designed for himself in a former Spitfire factory in Marylebone, London, after living in it for more than 20 years.

Farrell designed the apartment in the Old Aeroworks in 1998. The architect converted the space – which was previously the office for his architecture studio – into his home after his studio outgrew the space and relocated next door.

“I’m selling it after over twenty years living here as I want to get away from the feeling of cabin fever, living and working in the same group of buildings,” he told Dezeen. 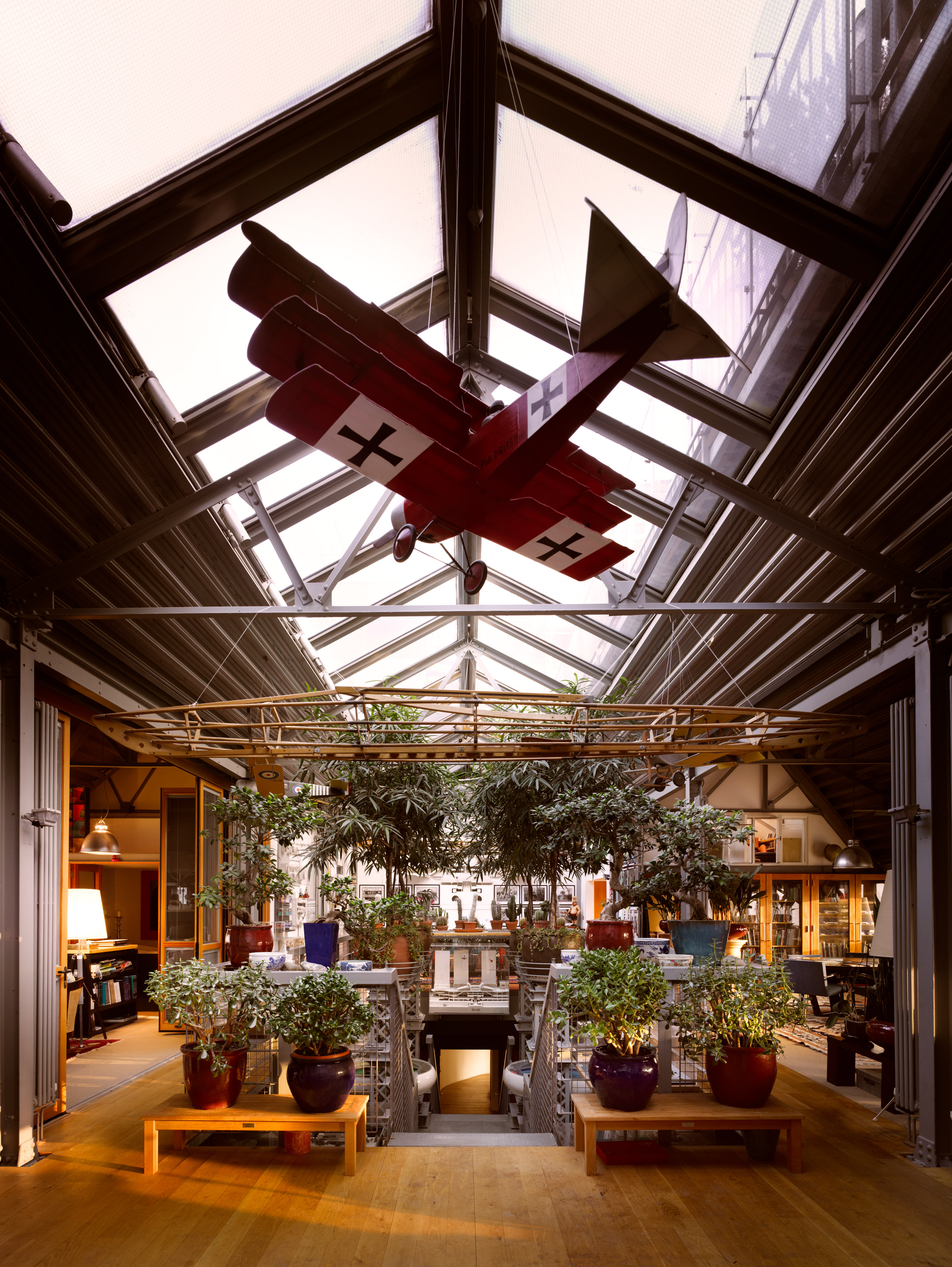 Farrell is the architect of numerous postmodern landmarks in London including the TV-am television studios, Charing Cross Station and the MI6 building.

Like much of his work, the interior of the penthouse apartment is bright and colourful and draws upon history. 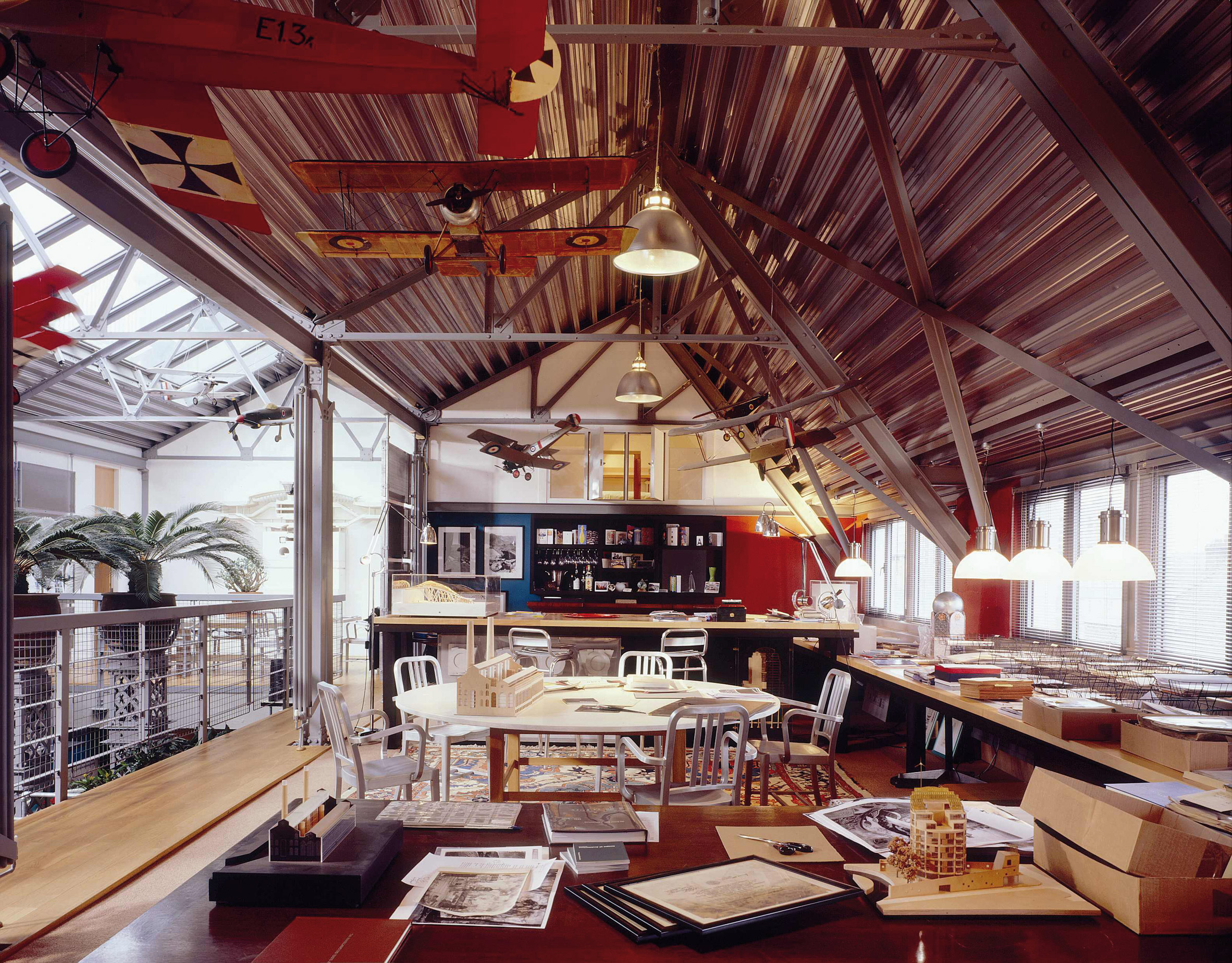 The art-deco block was formerly a factory for aircraft parts, and the interiors have an industrial aesthetic with numerous model planes hung from its ceiling.

“I like to think it represents my wider work by being exuberantly colourful, very mixed stylistically, and something of a collage starting with the base of its history, which included forty years as an aircraft parts factory, which all takes in the narrative and story telling of the building’s history,” he said. 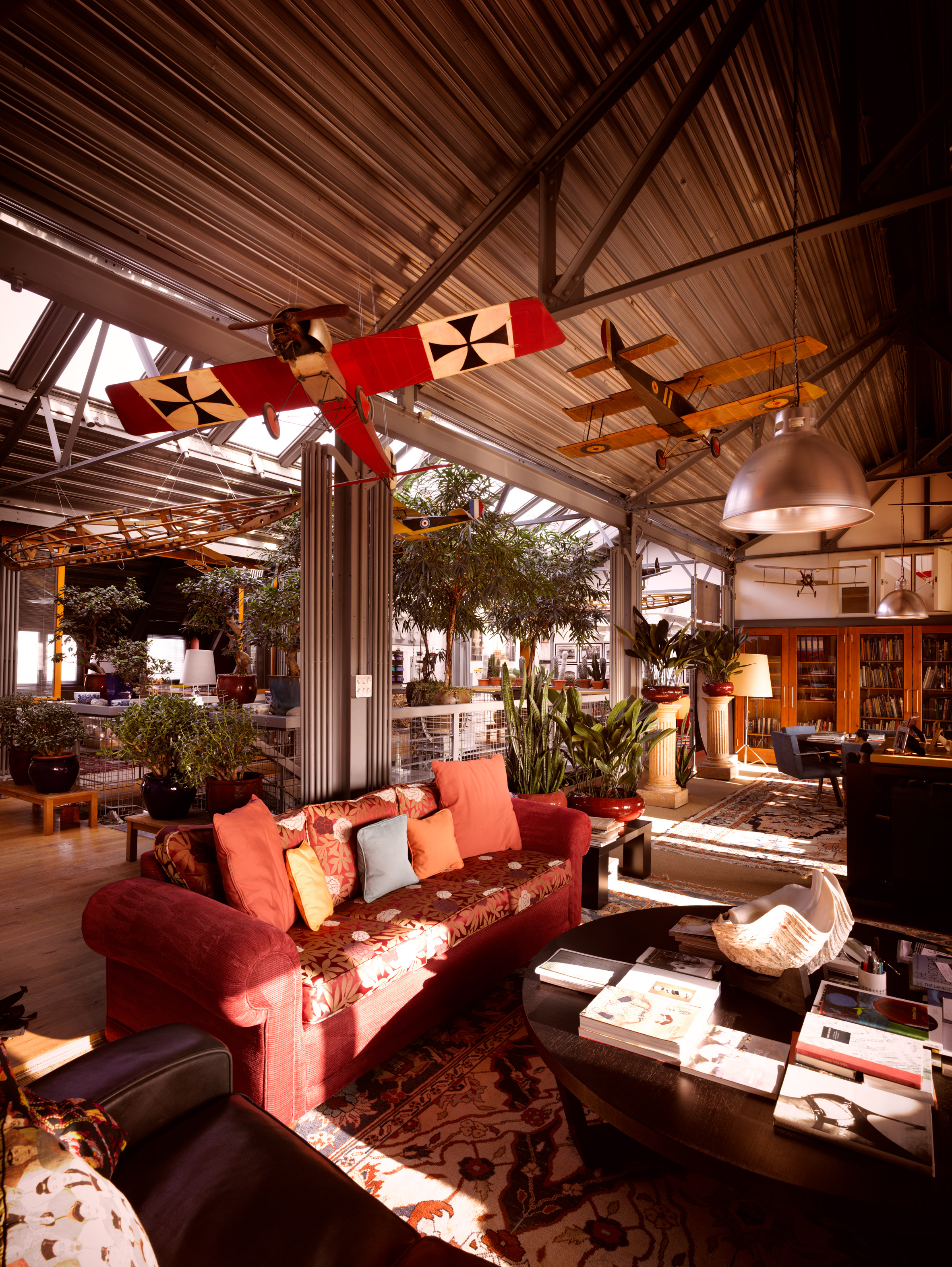 Farrell retained many details from its time as the studio office in the 306 square-metre-flat, which is arranged around a central space, and topped with a corrugated-steel roof punctured with large skylights.

“I began the conversion into a dwelling for myself in 1998, slowly,” he said.

“I first decided to keep the main stairs and the shell of the offices including the roof lights, the radiators, etc.”

He made some further changes to turn the former office into a functioning domestic space.

“I put in two mezzanines which were to form two bedrooms, the main bedroom is down on the main floor divisible by sliding doors. I added a kitchen and two bathrooms,” he explained. On the apartment’s main floor a battleship-grey staircase, which leads down to the home’s entrance, is flanked on one side by a sitting room and on the other by the main bedroom.

This room can be shuttered off from the main space by in-built concertina doors and has a ensuite bathroom.

At the far end of the apartment there is a dining area with a kitchen with stairs that lead to a mezzanine study on one side, and a dressing room with a mezzanine bedroom on the other. 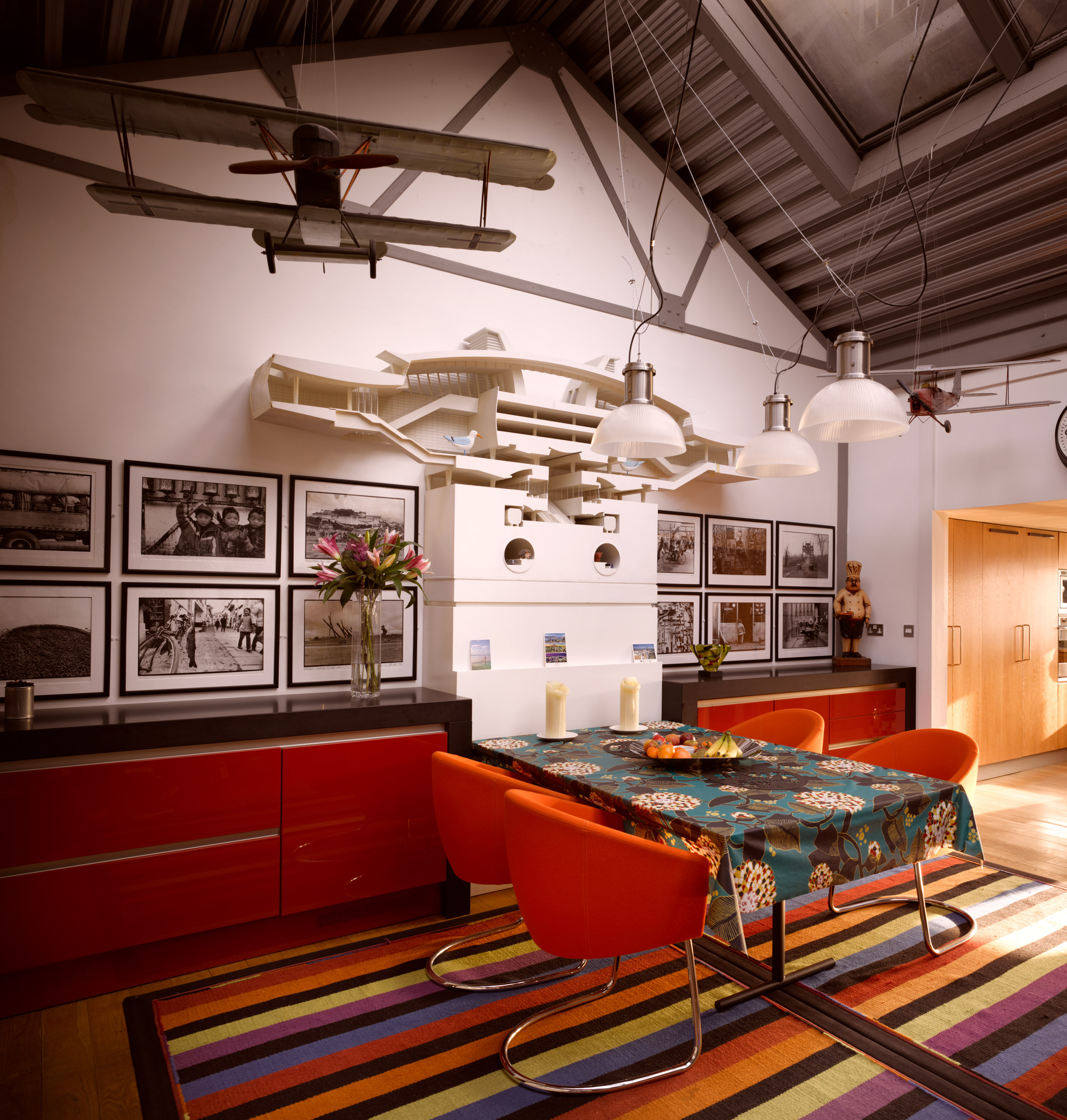 Like many other architects’ homes, Farrell believes that his apartment says a lot about him.

“Architects’ homes are revealing in that they tell a story of their taste obsessions, and how they publicly want to be seen in private as it were. This is a great home to have parties for example,” he added. 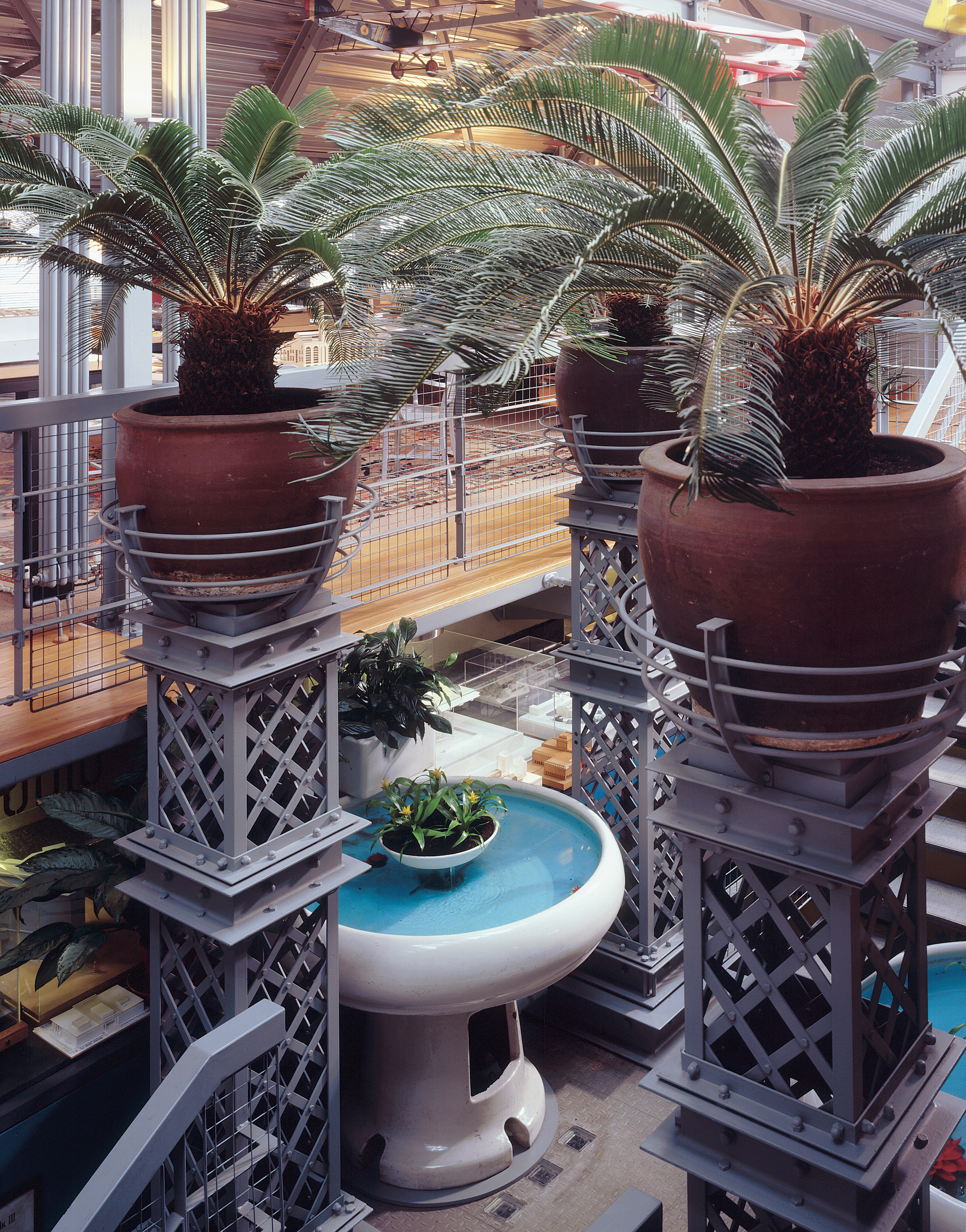 Farrell was one of the leading proponents of postmodern architecture. After working in partnership with Nicholas Grimshaw for 15 years, Farrell established his studio Farrells in 1980.

He is one of many architects to have designed their homes including Zaha Hadid, who designed an apartment for herself in Miami and architectural designer John Pawson, who designed his own minimalist house in King’s Cross.

The post Terry Farrell puts his “exuberantly colourful” flat on the market appeared first on Dezeen.