Paint-splattered surfaces, spaghetti-print bed sheets and neon wall art all feature in Studio Job‘s new base in Antwerp, Belgium, in a design that founder Job Smeets describes as being “like a visual assault”.

The art and design studio opted for maximalism – the highly decorative style that is growing in popularity – for its gallery-inspired new space.

“With minimalism you can hide behind the aesthetic values of line and colour. With an eclectic style, you need to know what you are doing otherwise you overcook it,” explained Smeets. “It could be a well executed modern interior of a 90 year old collector.” 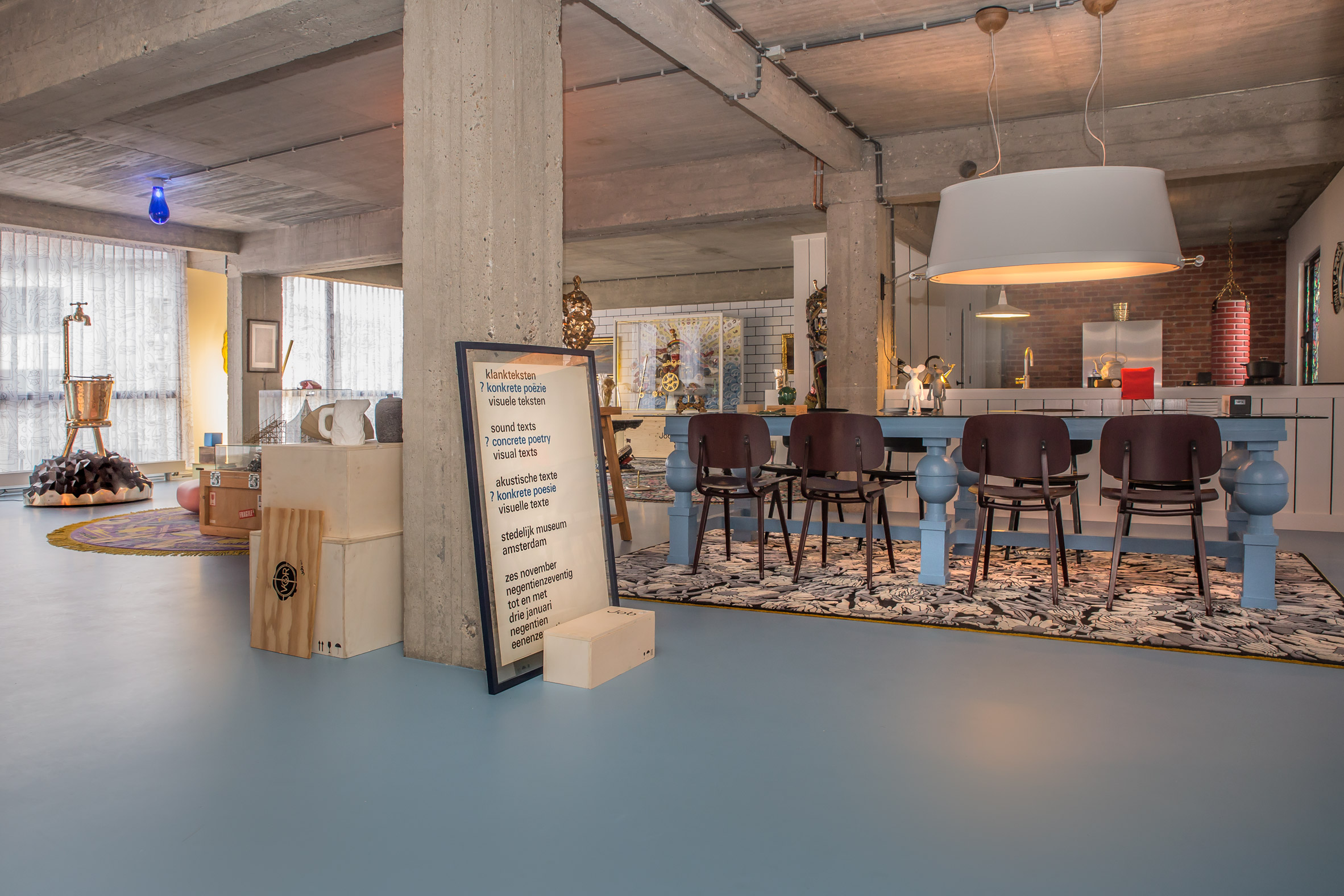 Smeets leads Studio Job with Nynke Tynagel, who he was formerly in a relationship with. The studio was previously based in the Netherlands only, but Smeets wanted to move to Belgium to distance himself from “the suffocating Dutch design scene”.

“Antwerp can be rough as Berlin but as refined as Bruges, and that was a really exciting mix for me,” he said.

“We wanted to focus on our work, our ideas and our creativity, and moving countries helps with that. It keeps things fluid and changing, away from a local bubble.” 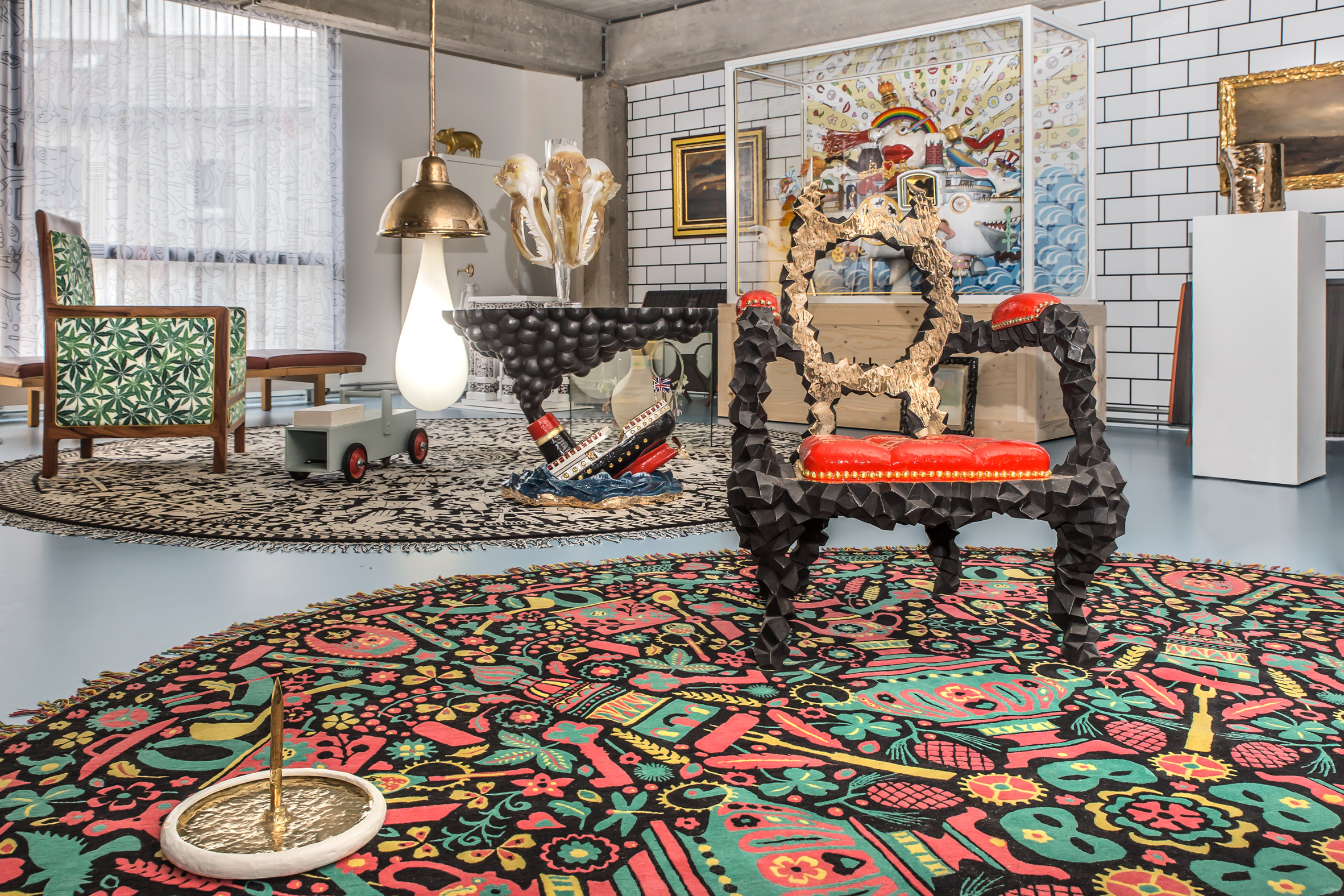 The designer first started making plans to move back in 2003. He purchased an old Jewish school building, located in the Belgian city’s diamond district, in 2007 but his renovation works didn’t start for another decade.

His overhaul involved completely stripping the building back to a concrete shell, with all classrooms demolished. It was then completely reconfigured, creating a mix of work spaces, but also private living spaces. It serves as both a studio and a private home for Smeets. 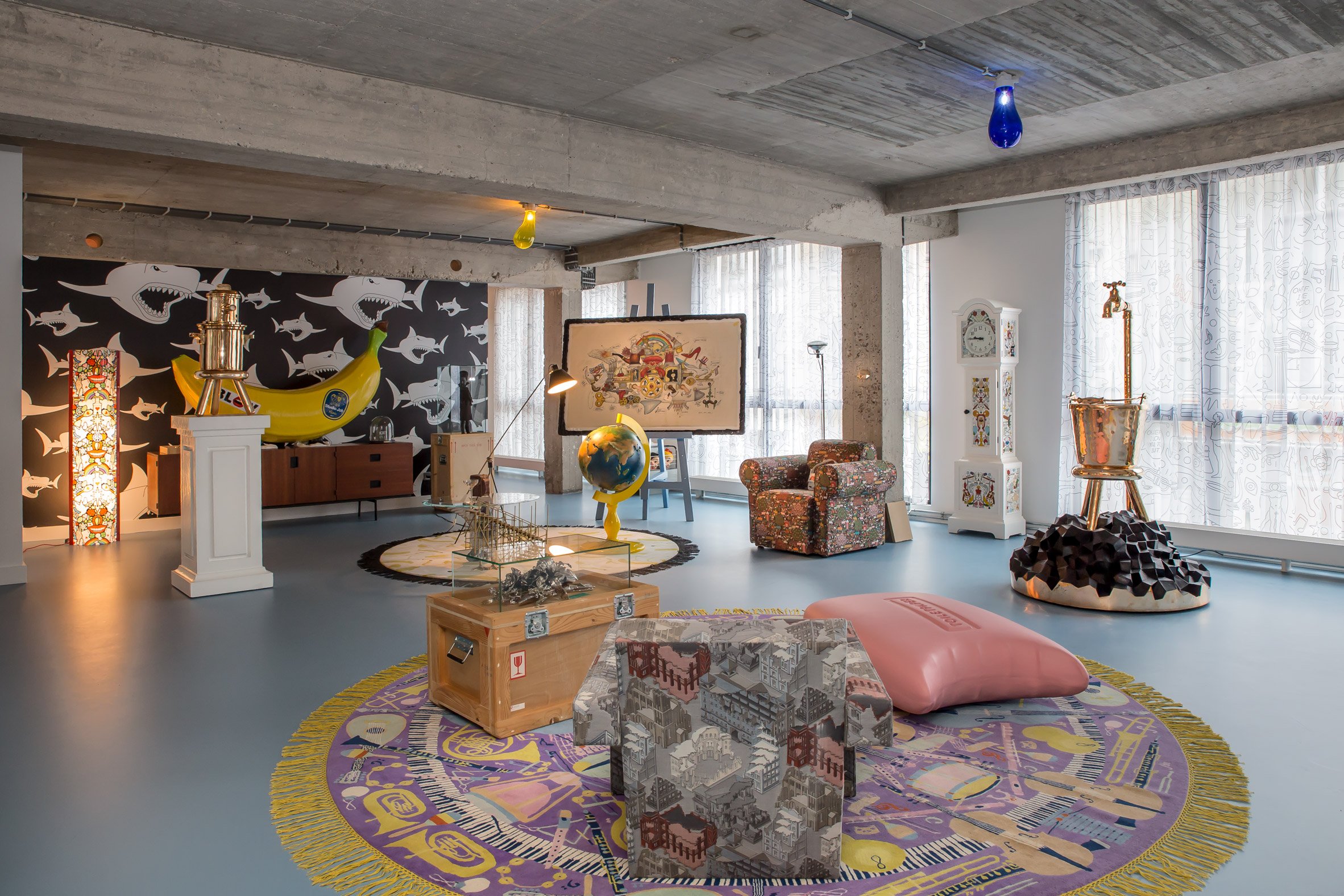 At the studio’s centre is a gallery space displaying many of Studio Job’s works, including the bronze Pussy Cats sculptures made for Carpenters Workshop Gallery and a trompe l’oeil punching bag called Pump My Wall designed for Italian brand Gufram.

“The main gallery/living area is the space that guests always fall silent in – it’s like a visual assault of so many pieces and so much to take in,” said Smeets.

“It’s overwhelming sometimes to see pieces from over 20 years of work all together in one space. It makes me realise how much we have done over the years and how prolific we have been.” 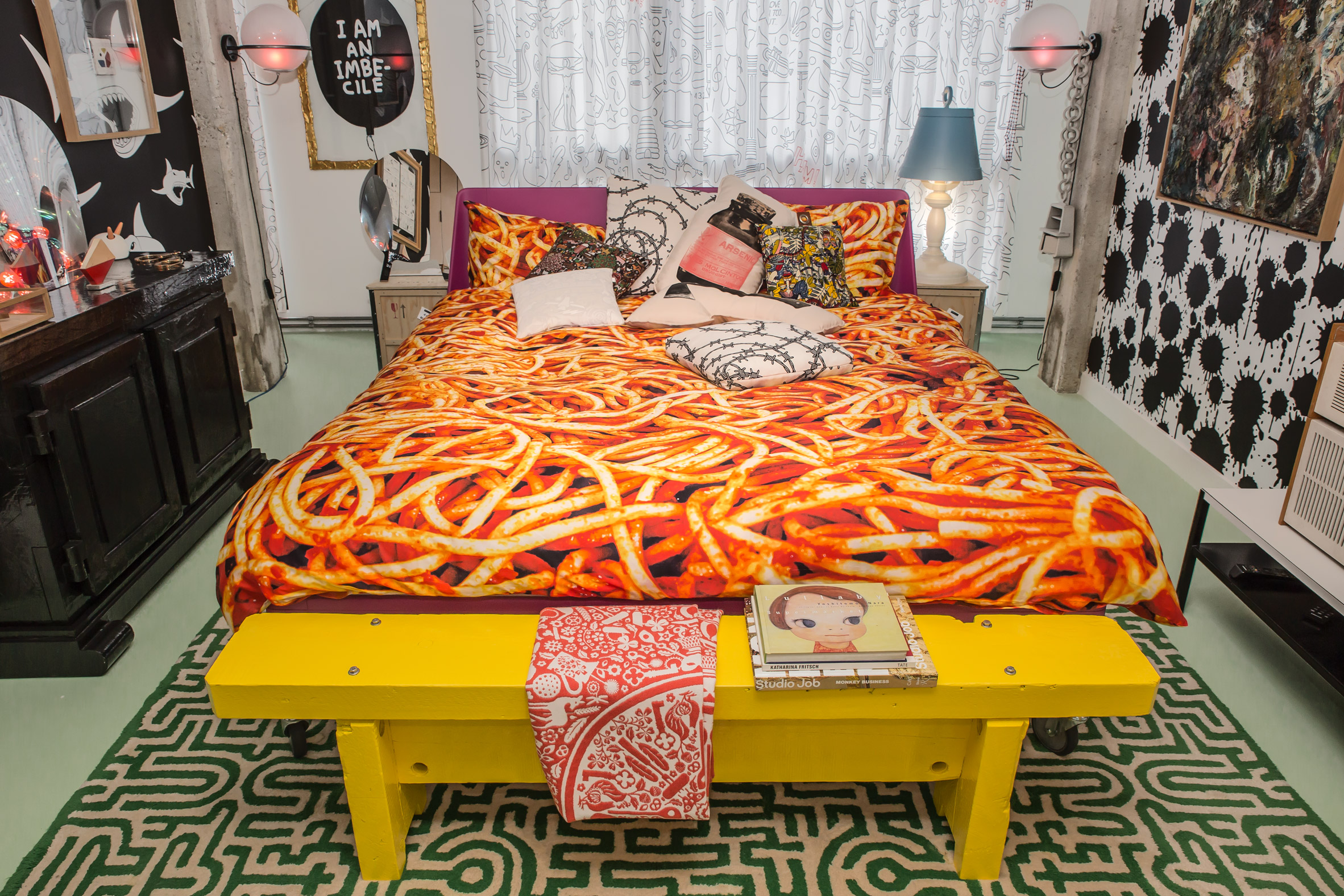 As well as two large kitchens, the property contains a pair of bedrooms located at opposites end of the building. In one, paint-splatted surfaces contrast with shark-patterned wallpaper.

This room boasts an en-suite bathroom covered in bright red tiles, complete with a gold rollmop bath and the studio’s nipple-like Tit lamps. 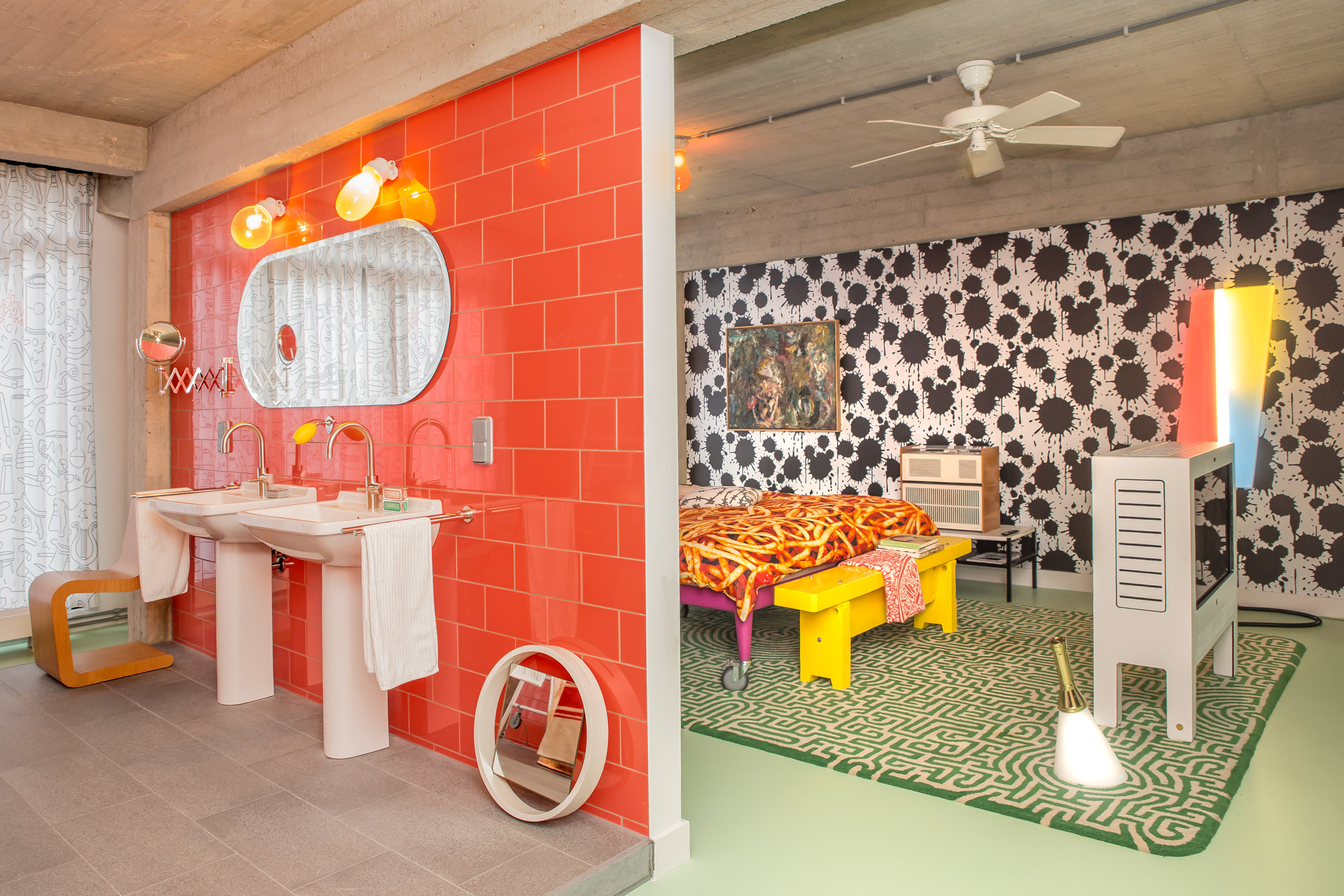 “It’s an eccentric space packed with pieces, yet the way its been shaped it’s a very peaceful and calming place to live and work,” added Smeets.

“You could say it was a reflection of the inside of my head, but the calmer, more curated and measured version.” 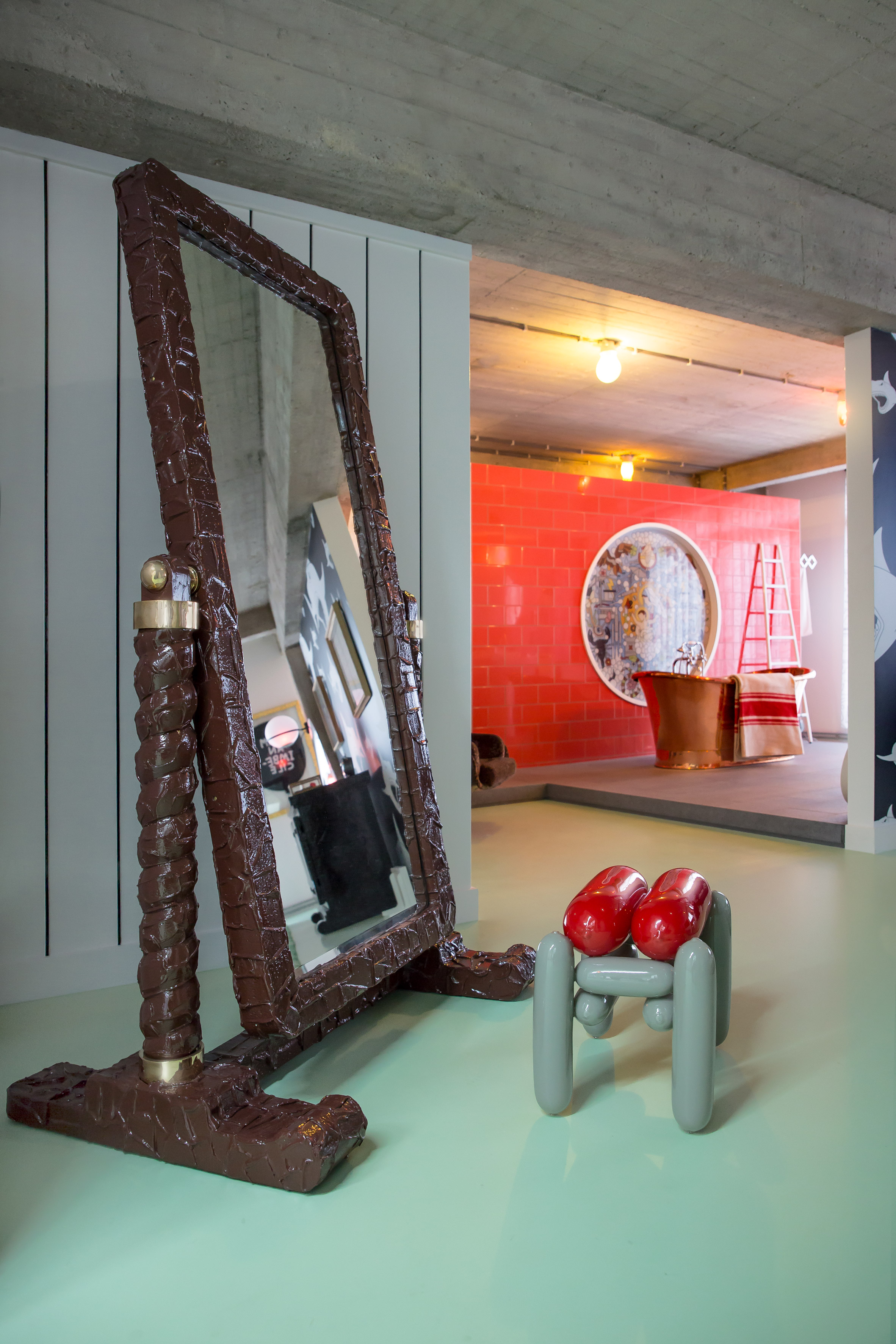 Studio Job isn’t the only studio favouring maximalist interiors, rather than the popular, pared-back aesthetic.