Architecture studio Michaelis Boyd has introduced touches of brass and geometric pattern to a listed church in London to create a 1960s-inspired home for Cantonese eatery Duddell’s.

The restaurant was founded in Hong Kong in 2013 as a dining destination for people with an interest in the arts and culture, and has two stars in the influential Michelin Guide. It has now opened a branch in Southwark, set within a Grade II-listed church.

Much like its Hong Kong counterpart, Duddell’s London will act as a restaurant and gallery space, displaying collections of contemporary art pieces. 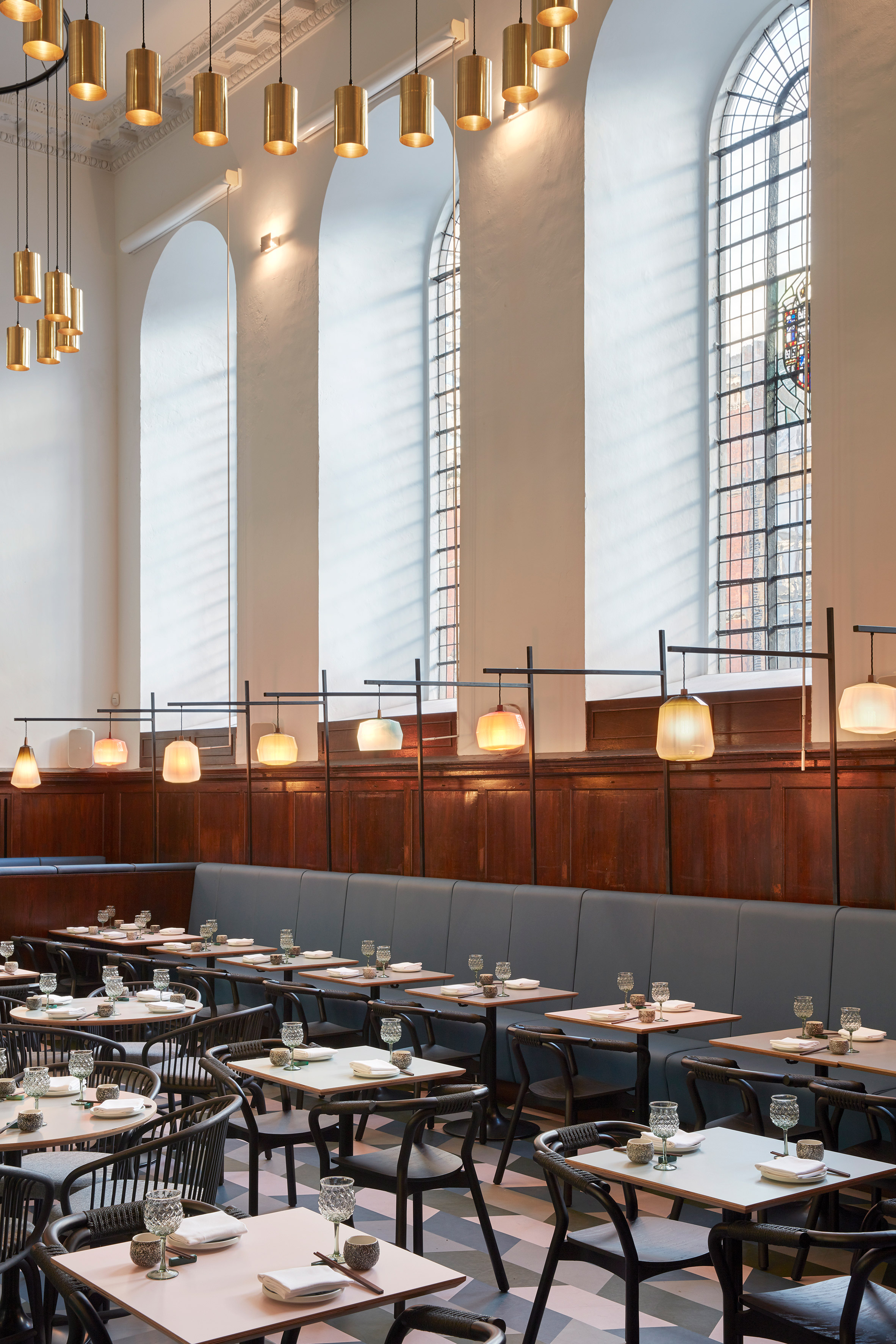 While the original branch was designed by Studioisle, for this intervention Duddell’s charged Michaelis Boyd with creating the restaurant’s interiors.

Influenced by the bold aesthetic of traditional Hong Kong tea rooms from the 1960s, the practice went about creating a retro space with touches of pattern and colour. 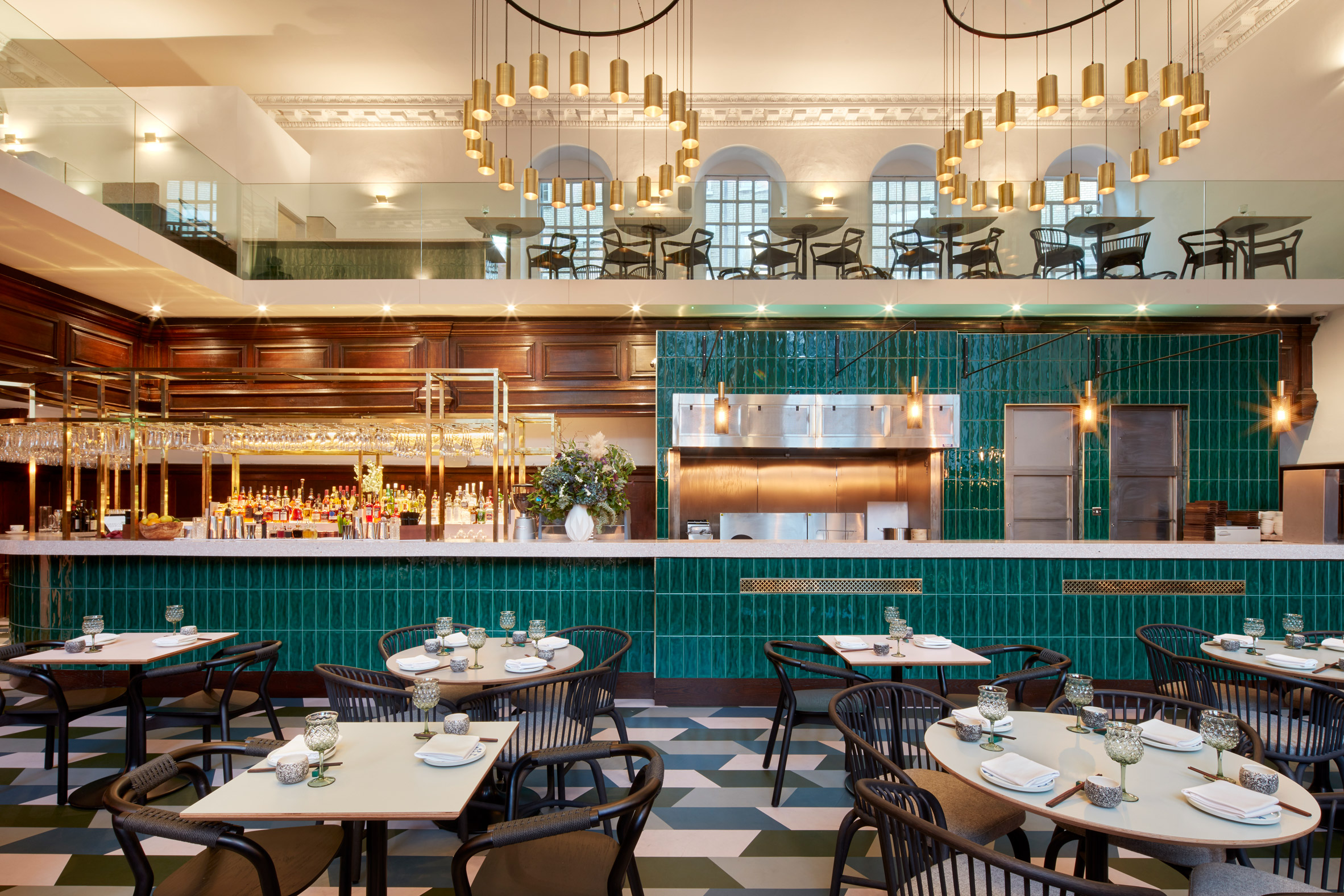 “We wanted to capture the spirit of the original Hong Kong restaurant but present it in a completely different way,” practice co-founder Alex Michaelis told Dezeen. 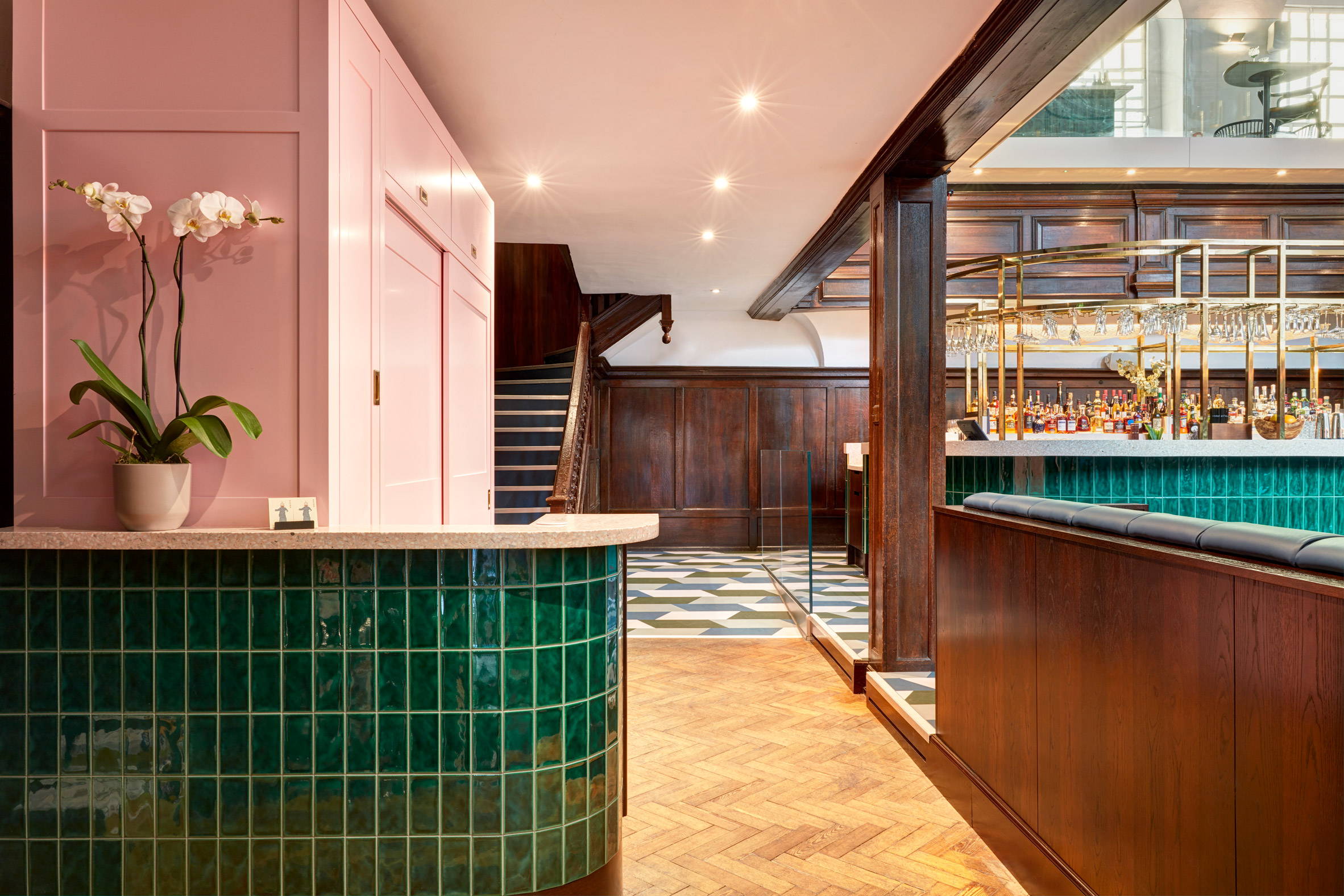 Opposite lies a freestanding volume clad in sea-green tiles with a contrasting pink terrazzo countertop, which plays host to the dim sum kitchen and cocktail bar. Brass has also been used to craft shelving for drinks and overhead lighting.

The architects have installed rhombus-patterned rubber flooring at a raised level to protect the building’s original parquet, which in some areas has been left exposed. Dark oak panels that run around the perimeter of the room have also been preserved. 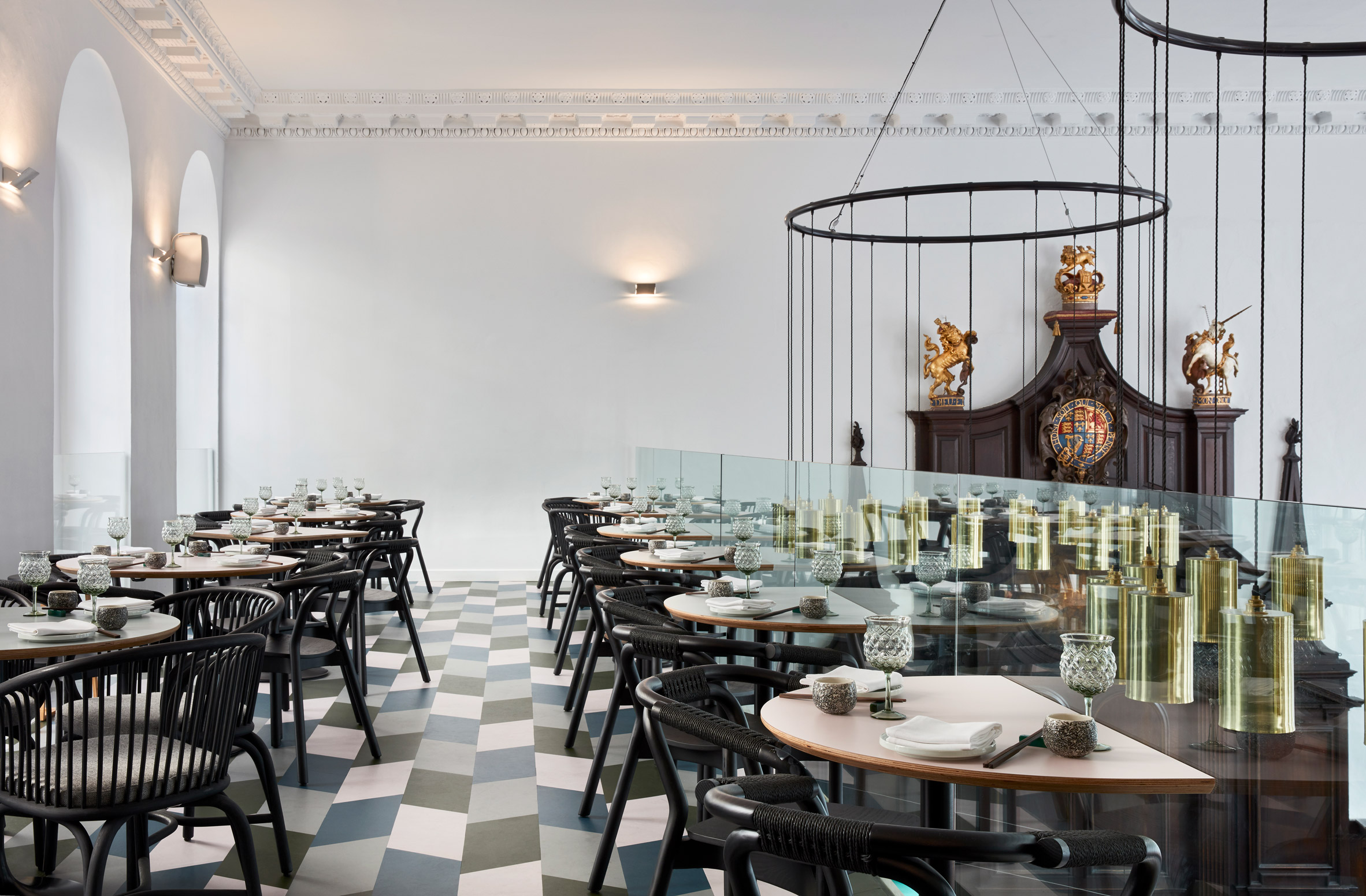 “A big part of the project was restoring the building to its former glory – the design seeks to show a clear distinction between what is old and what is new, which I think works particularly well in this monumental space,” said Michaelis.

Seating is provided by a bright blue banquette thats runs along a rear wall, and black rattan chairs. 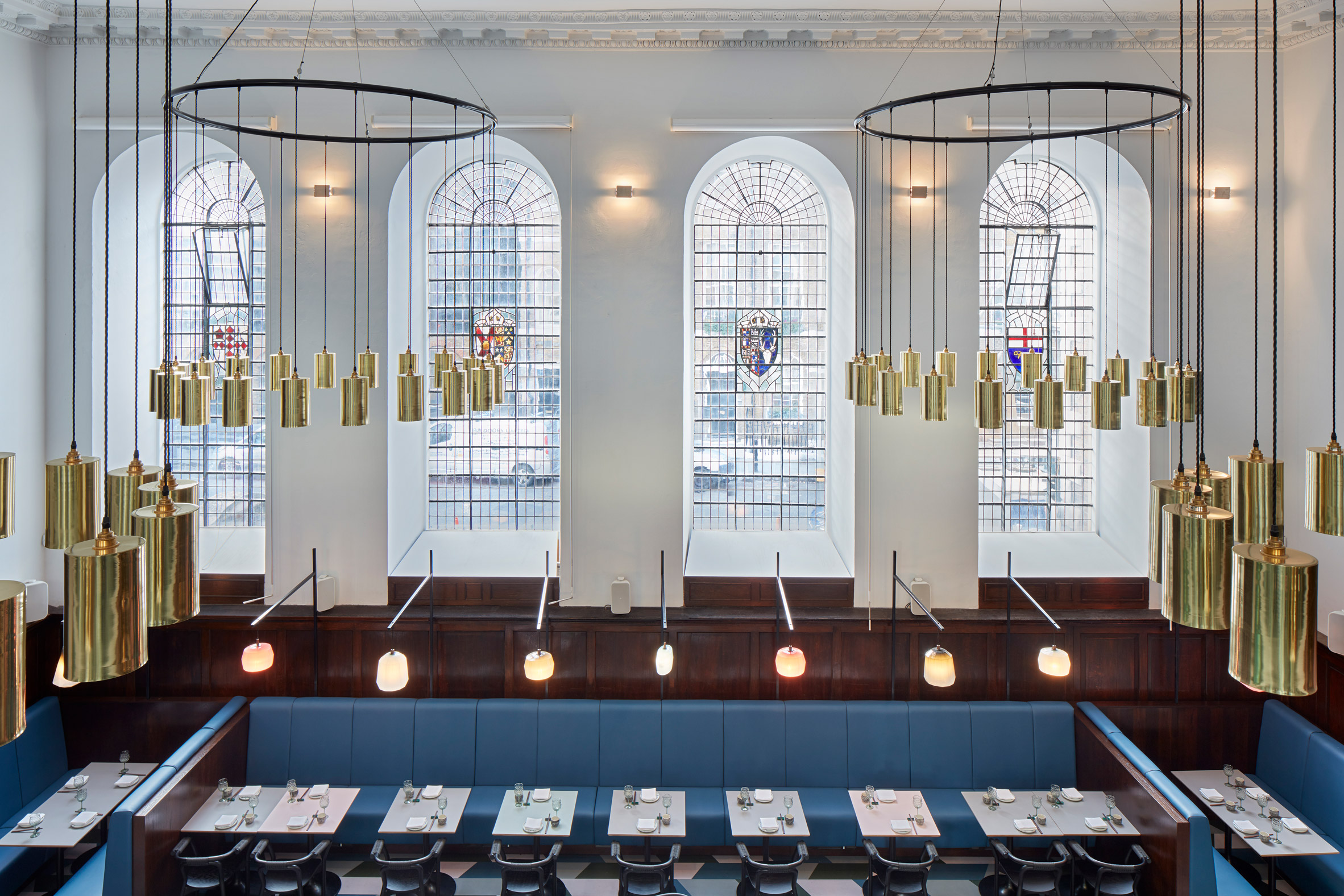 Extra dining space is offered up on the mezzanine level, which is fronted by a glass balustrade so that guests can glimpse out over the restaurant.

Based in London’s Notting Hill, Michaelis Boyd has previously teamed up with Soho House to turn a run-down farm in Oxfordshire into members-only guest accomodation. The practice are also behind the design of New York’s Williamsburg Hotel.

Photography is by Ed Reeve.