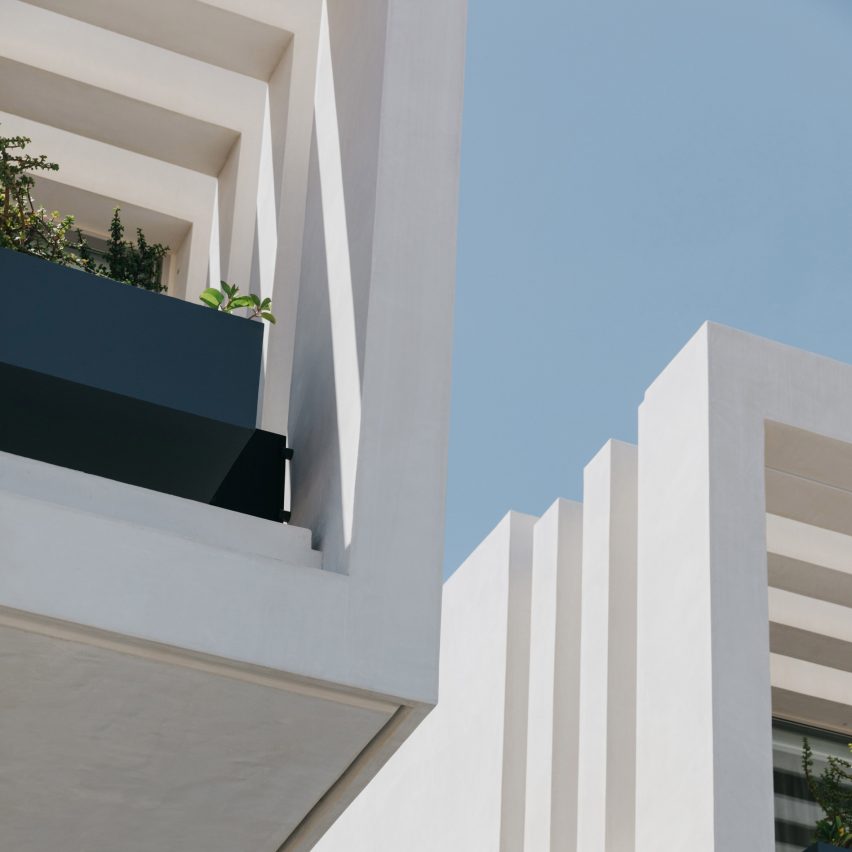 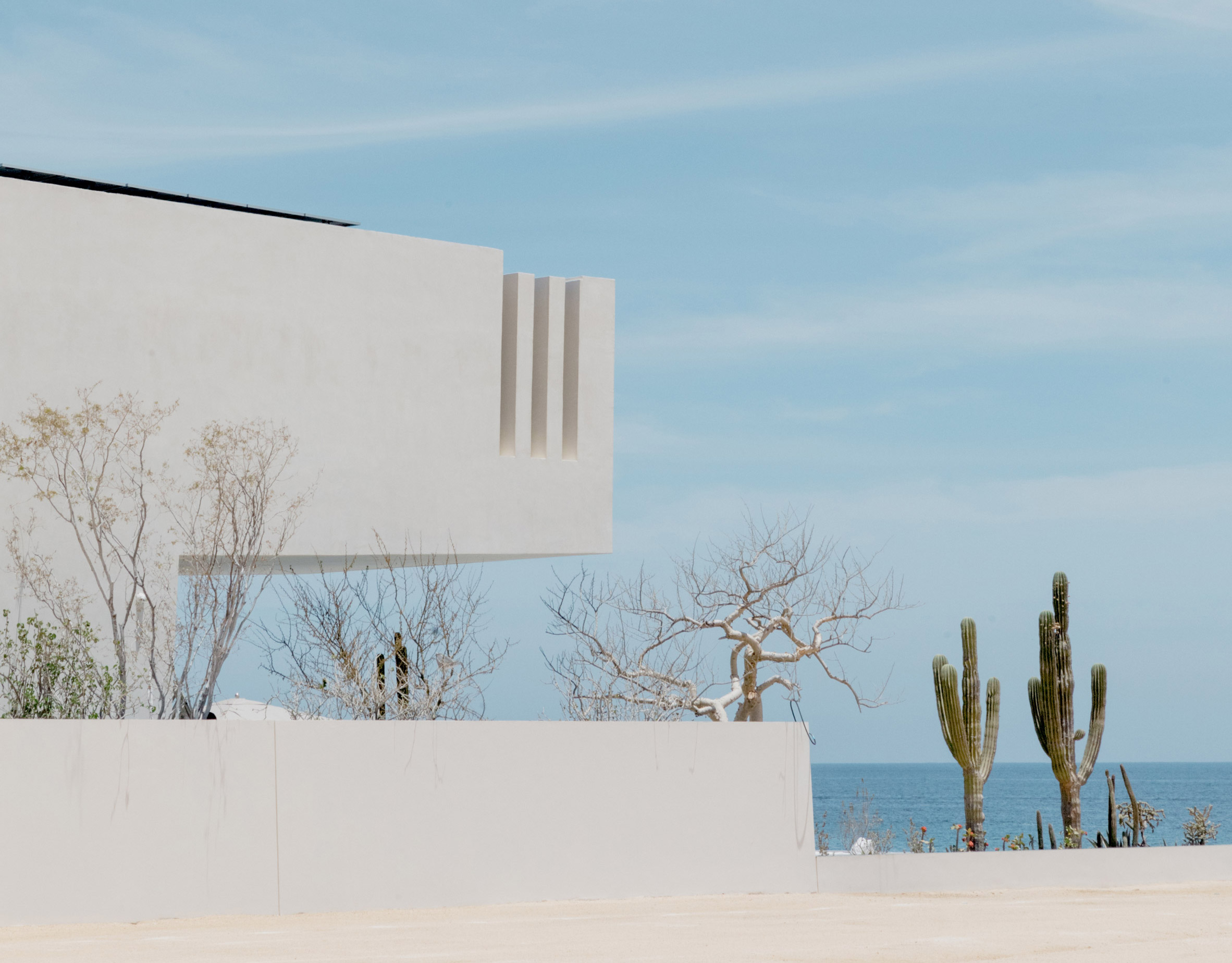 The two-storey house is located in Mexican resort town Cabo Saint Lucas, in the southern end of the country’s peninsula Baja California. Known for its desert-like setting of sandy dunes and bright blue seas, the region influenced the design of the project, created by Gloria Cortina and architect Mauricio Gomez of Gomez de Tuddo Arquitectos.

Both based in Mexico City, the two collaborated on the house for a couple of art collectors and their contemporary, minimalist pieces are showcased throughout. 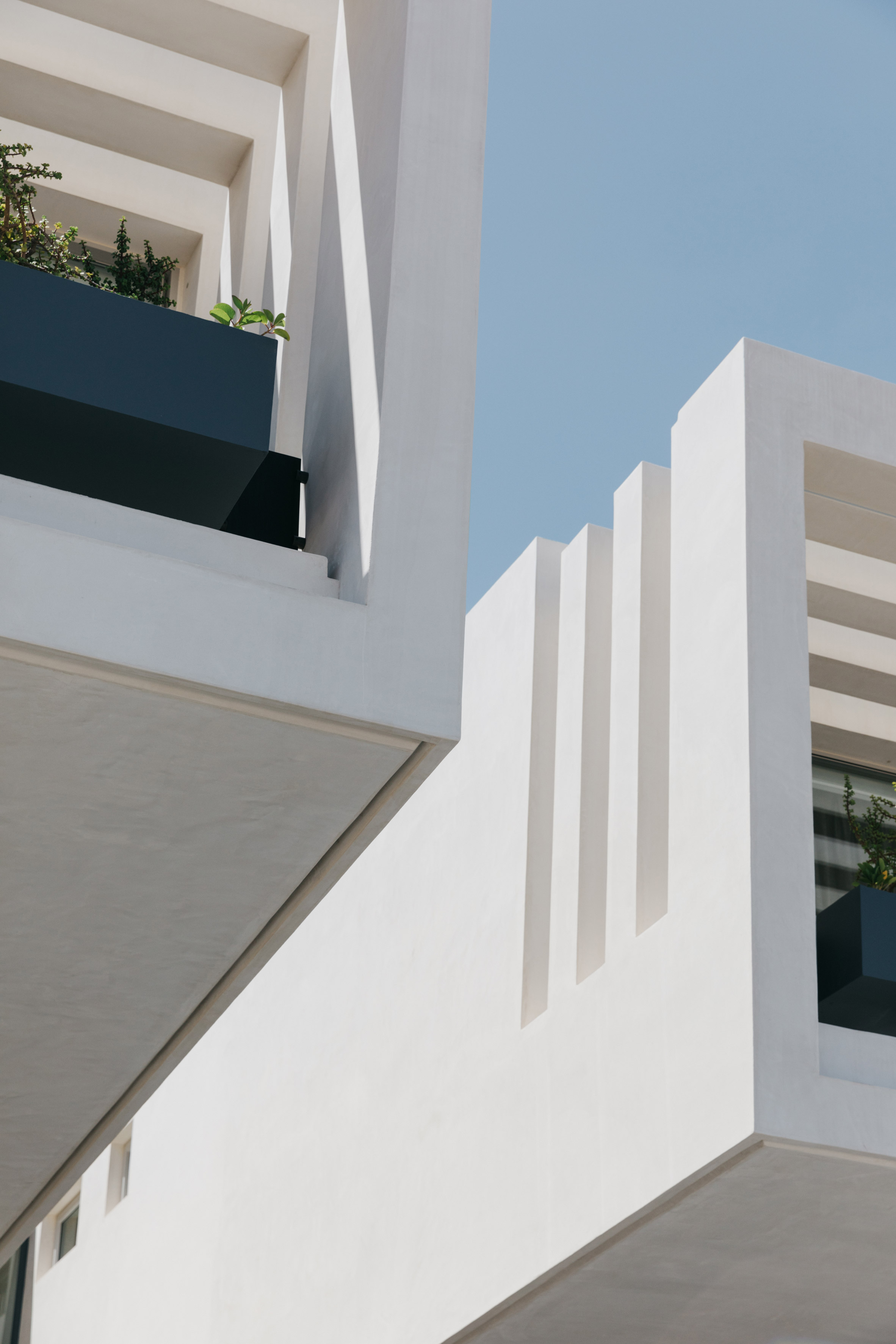 The house comprises a rectangular, cantilevering top floor that projects over its base to create shaded outdoor areas and several private balconies above.

“Cabo is incredibly arid,” said Cortina. “The desert comes into the house, so this is not a place for highly artificial design concepts.” 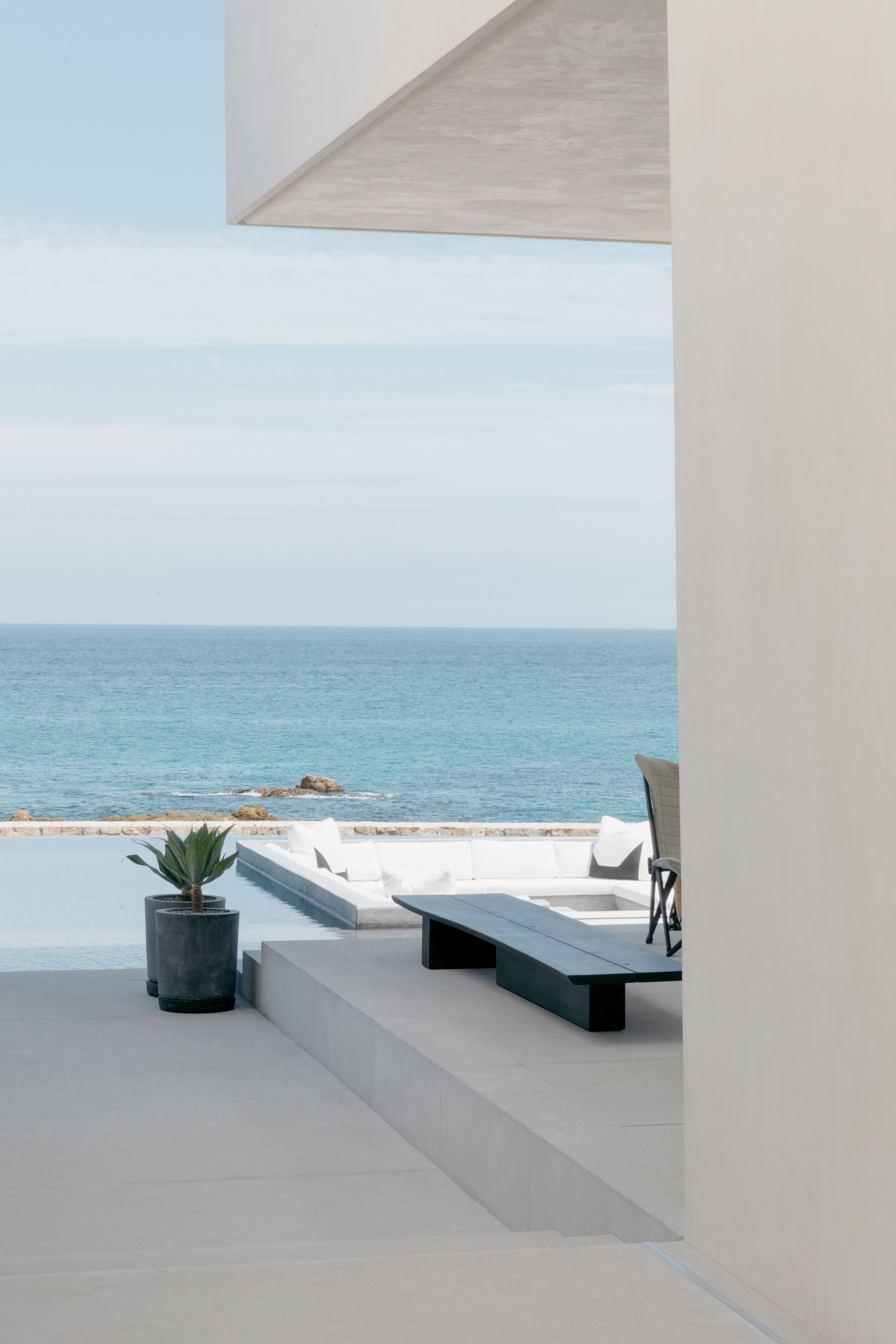 Its symmetrical design is a focal point, and dramatised by the balconies that project eight metres over patios below. One of these faces the sea and is complete with an outdoor living room, while the other faces south.

“It responds to the tropical desert environment by literally stretching and splitting the 1,500-square-metre building’s envelope to create a distinctly Mexican expression of modernist architectural design, using materials and finishes that are rooted in significant cultural references,” the team said. 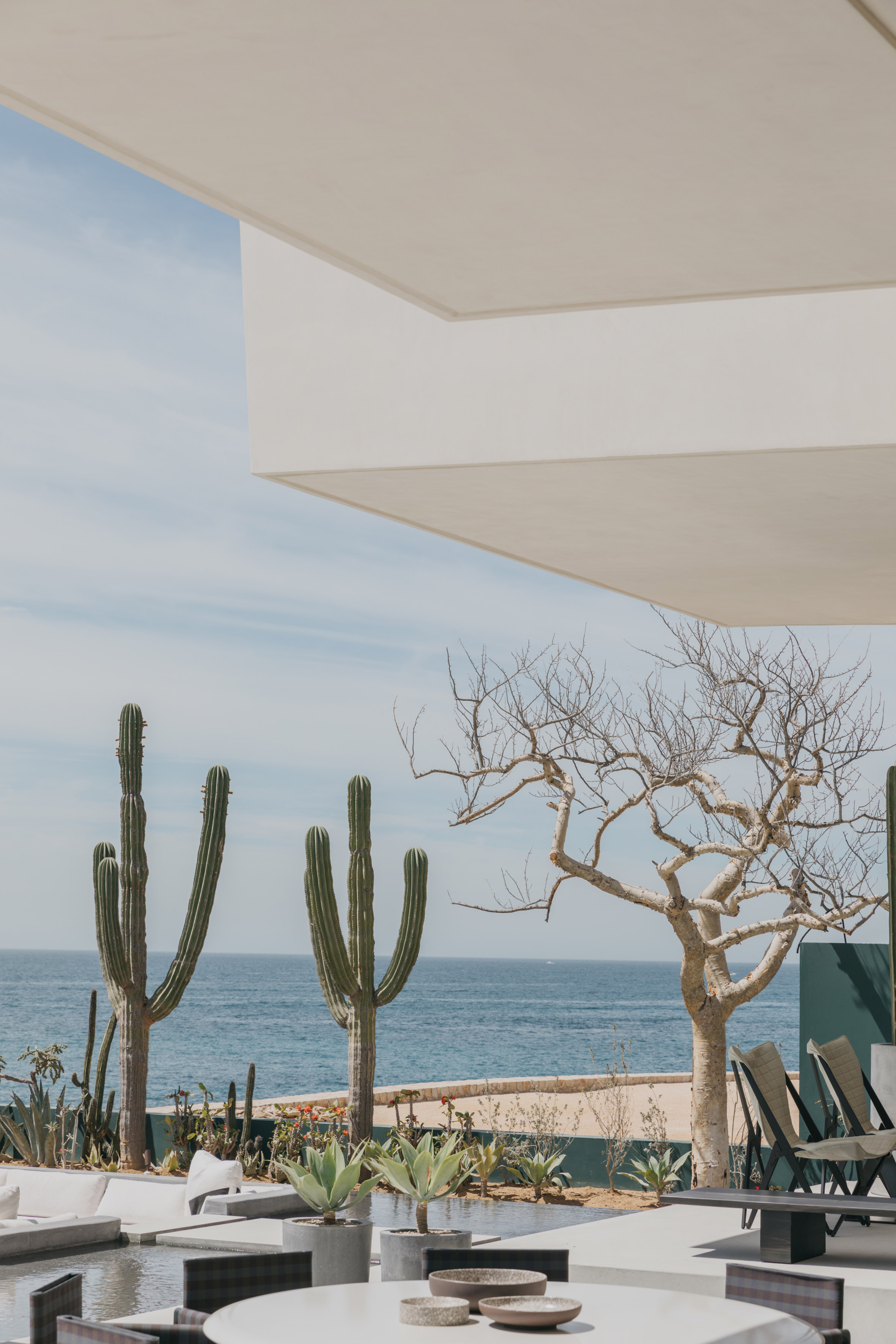 The north-south axis of the house splits the home in two, and is outdoors, thus resulting in a pair of two-storey volumes that each have their own staircases.

The house was “conceived as a bird, coming down and landing – a form that was very useful, not only externally but in its interiors,” according to the team.

Its off-white, clay plaster exterior reflects the starkness of the landscape and is traditionally used in the region. The brightness also “creates a sense of order which captures and controls light and shade,” according to Cortina, who added that the aim was to create a home that was well integrated to the surroundings.

“There’s a lot of bare rock behind the house, with the sea right in front of it,” she said. 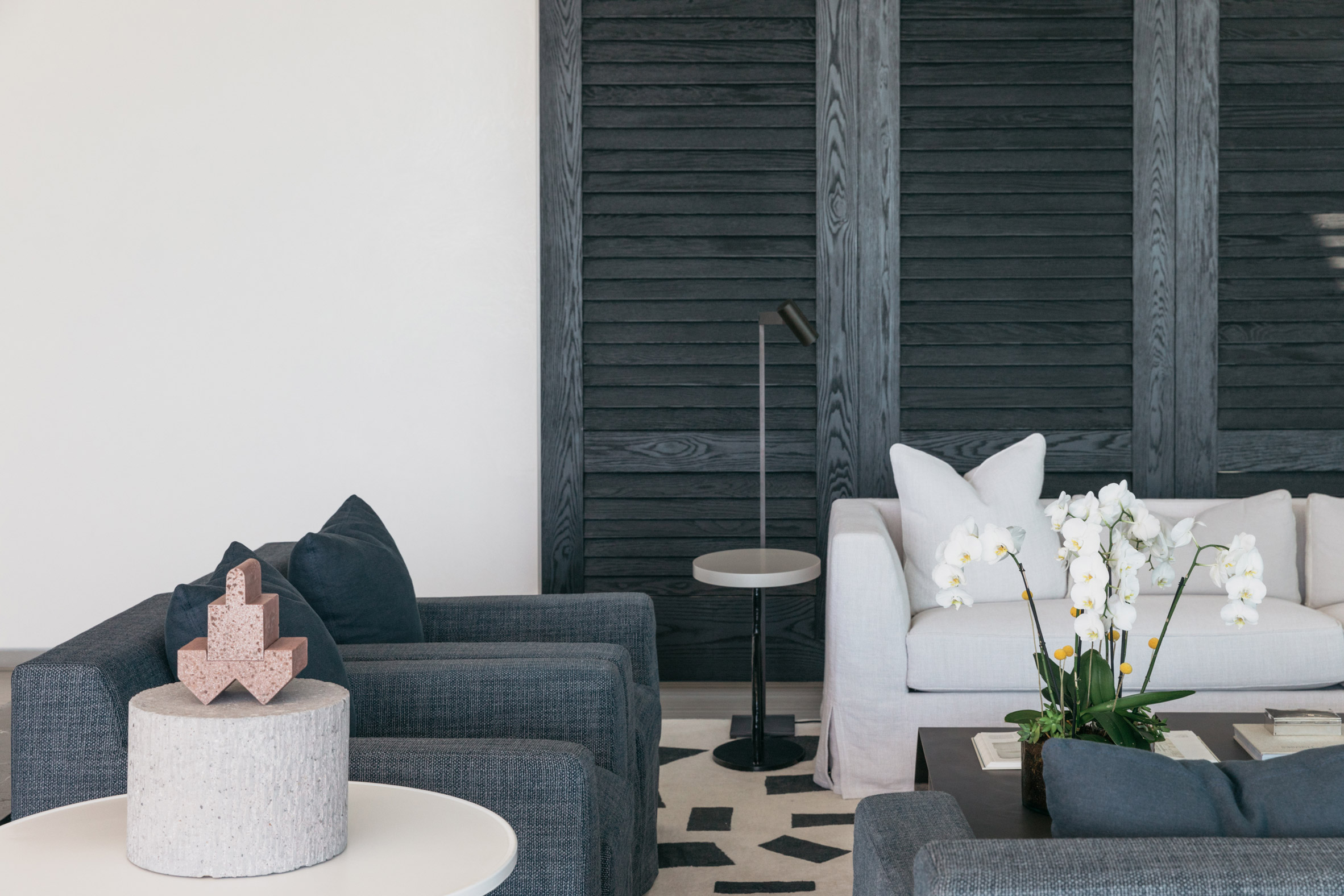 The plasterwork, called cal, is applied inside the home too and features a hand-rubbed finish that gives an “almost sculptural quality”.

For layout, the home comprises areas for entraining and relaxing on one side of its ground floor. Across the outdoor corridor is a kitchen and dining room with two black tables surrounded by pale wood chairs. 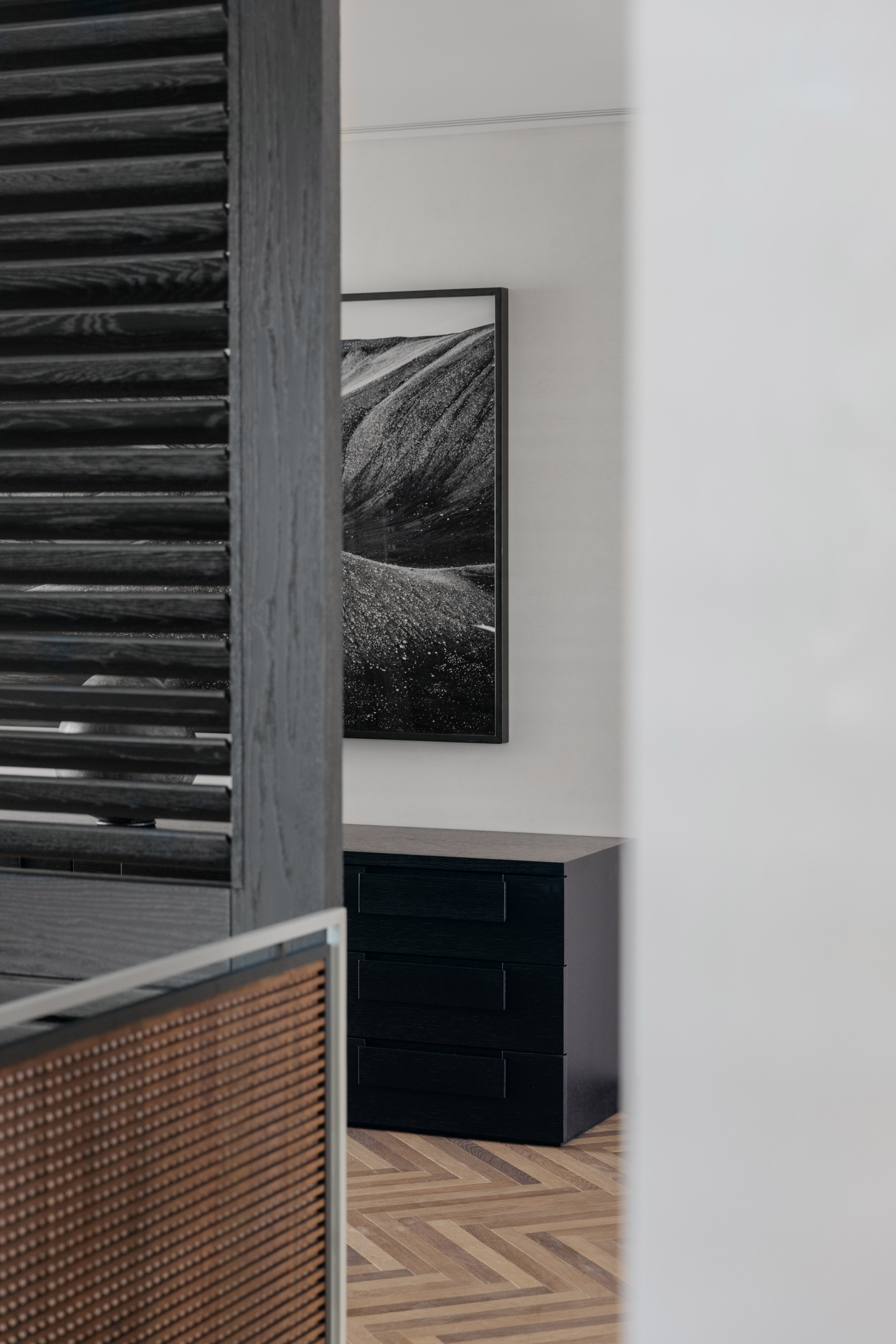 Sliding glass doors open onto an outdoor patio furnished like a living room, complete with a sofa, chairs, outdoor kitchen and dining area. A deck is built further from the house. Water from the swimming pool reaches the base of upholstered chaise lounges, giving the effect that they are floating.

Completing the outdoor space is a sitting area that has been built into the ground, and filled with cushioned benches. 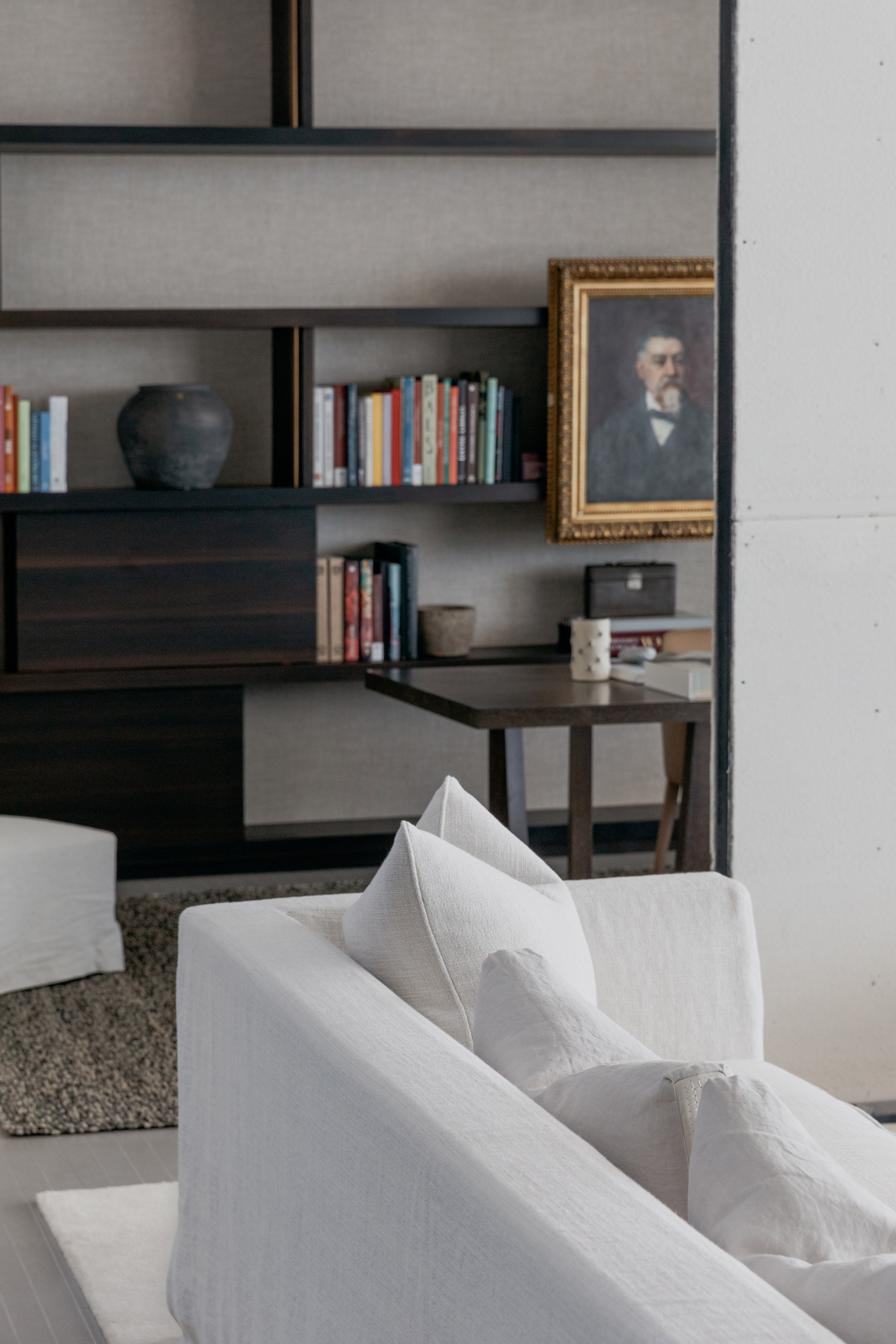 Decorating the home are sofas in grey and cream tones, paired with geometric coffee tables and other minimal furnishings and sculptural accent pieces.

“We wanted a full-on, completely curated series of interiors, sophisticated but very relaxed and not visually busy,” said Cortina. “I didn’t want to interfere with the sightlines or lose the spatial atmospheres,” she added. “The rooms are absolutely not dramatic stage-sets.” 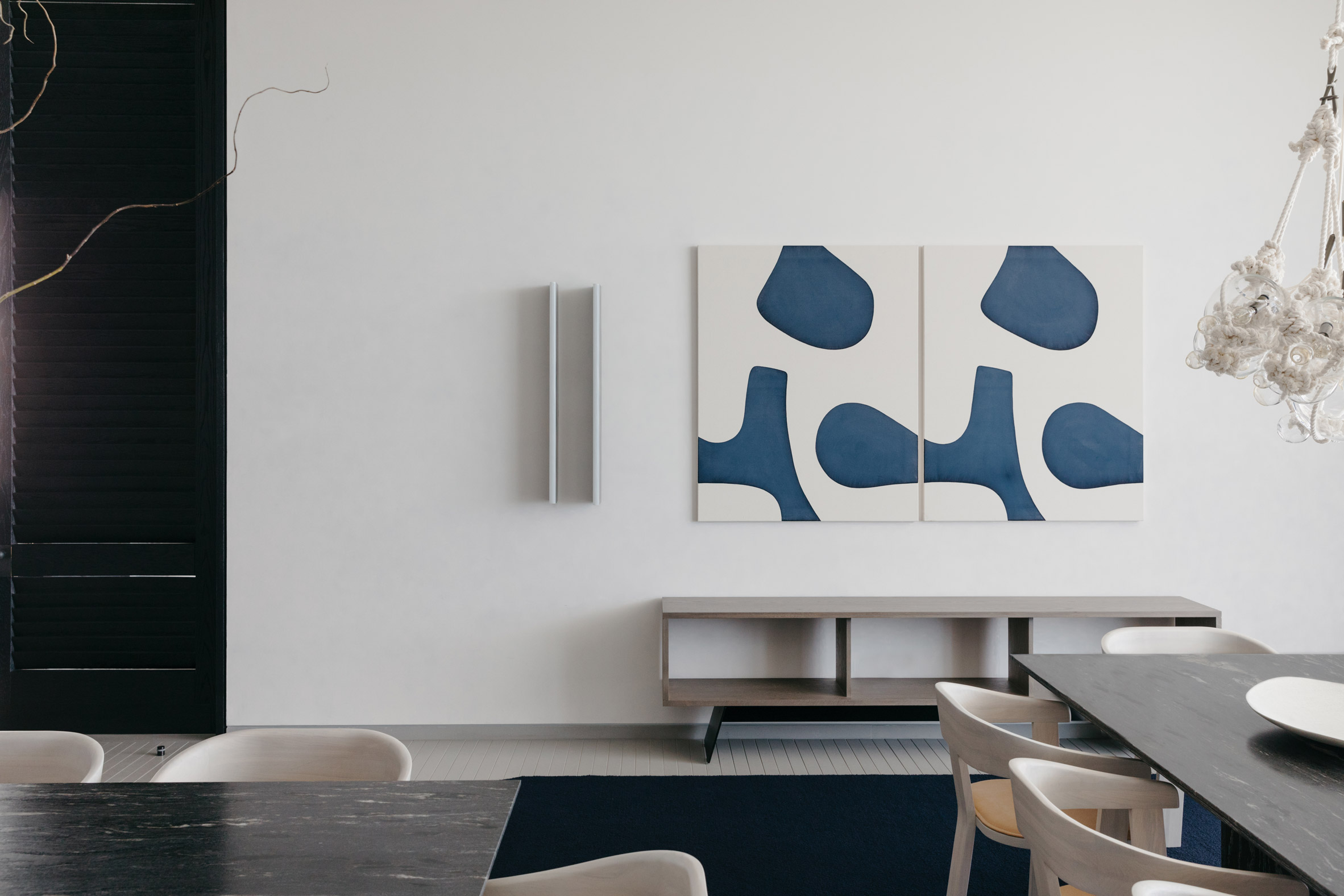 Fabrics such as indigo, cotton and linen are applied throughout, alongside wood doors in black.

Several furniture and fittings were designed by Cortina, including a blackened bronze console, a lava stone coffee table and a bench made from Mexican negro mate stone. 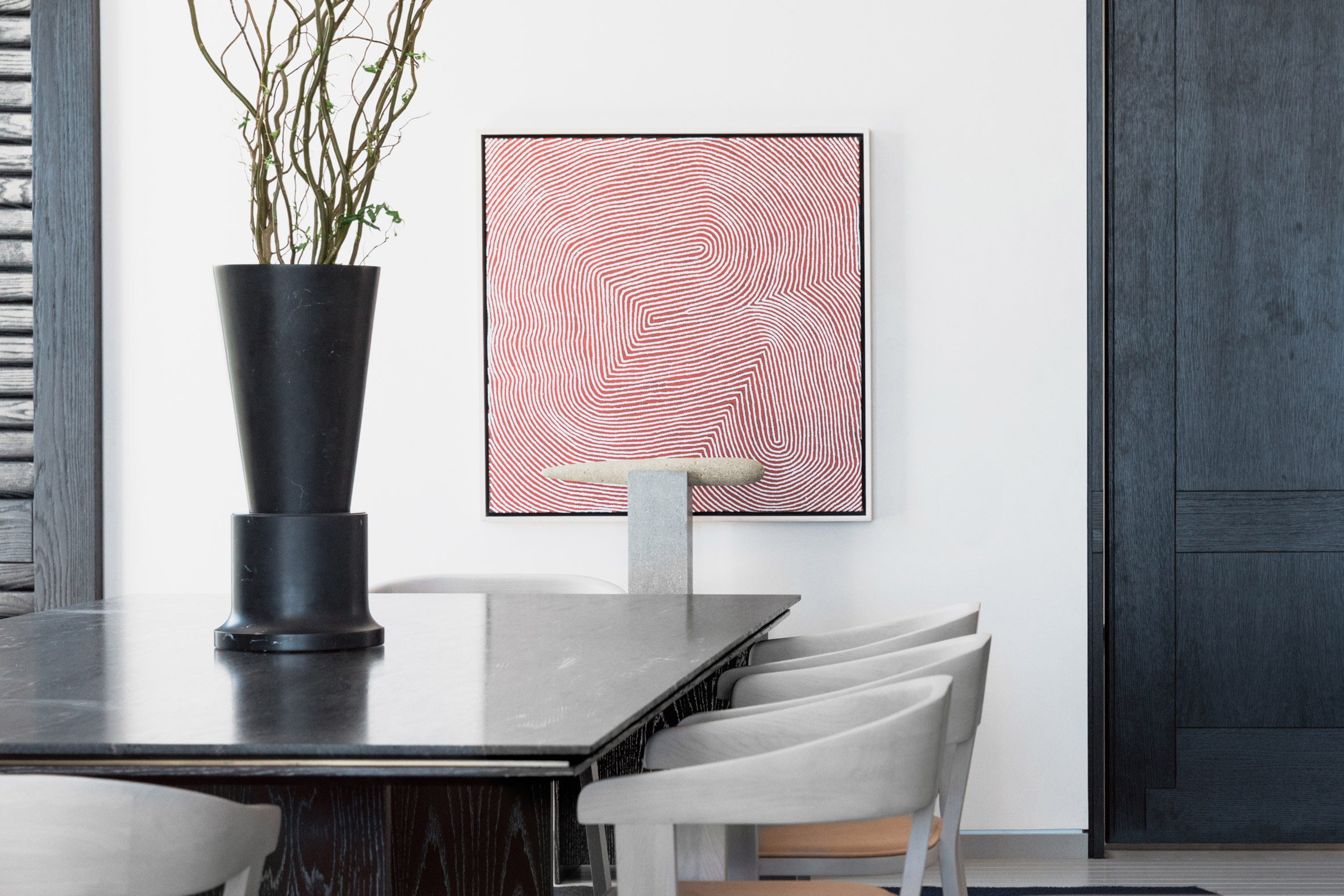 The house is complete with five bedrooms, six bathrooms and a lounge upstairs. Wood floors feature on the top level while pale Ceasarstone cut into thin strips for texture and grip covers the ground floor,

A parking garage is housed underneath the residence, and accessed via a sloped driveway from the street above. 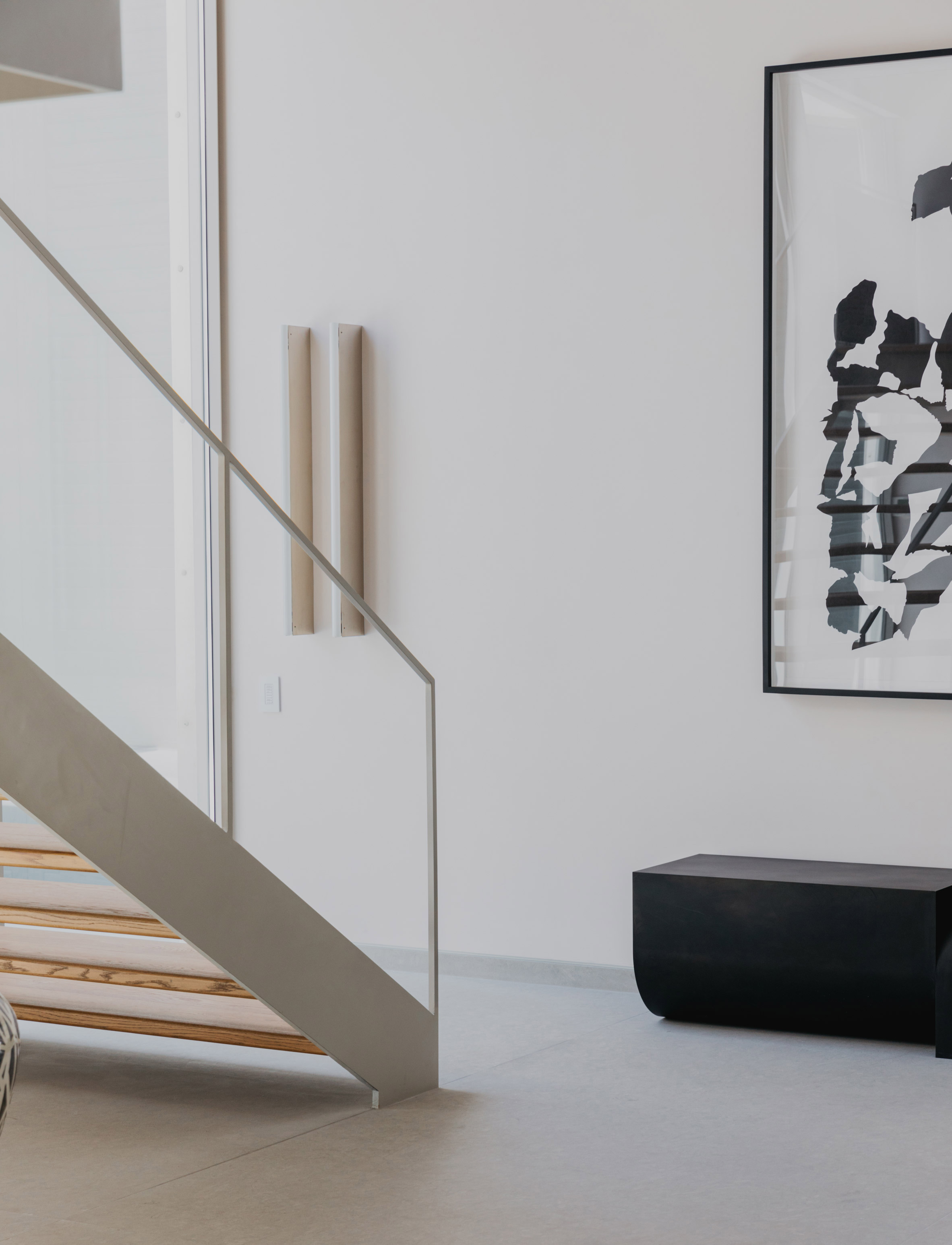 The region of Los Cabos comprises two beach towns, Cabo San Lucas and San José del Cabo, at the southern tip of the peninsula. The area is teeming with hospitality projects, such as Drift San Jose hotel, a verdant, cascading resort by Sordo Madaleno, and Mar Adentro hotel by Taller Aragonés.

About an hour drive north along the Pacific Ocean is Hotel San Cristóbal Baja by Lake Flato and Liz Lambert in the town of Todos Santos.