Described by Partners Hill as “a study in inclusion”, Longhouse contains a farm, restaurant-cum-cookery school, guest rooms and living quarters for its owners, Ronnen Goren and Trace Streeter.

The practice worked alongside Goren and Streeter over a period of 10 years to design the multifunctional property. 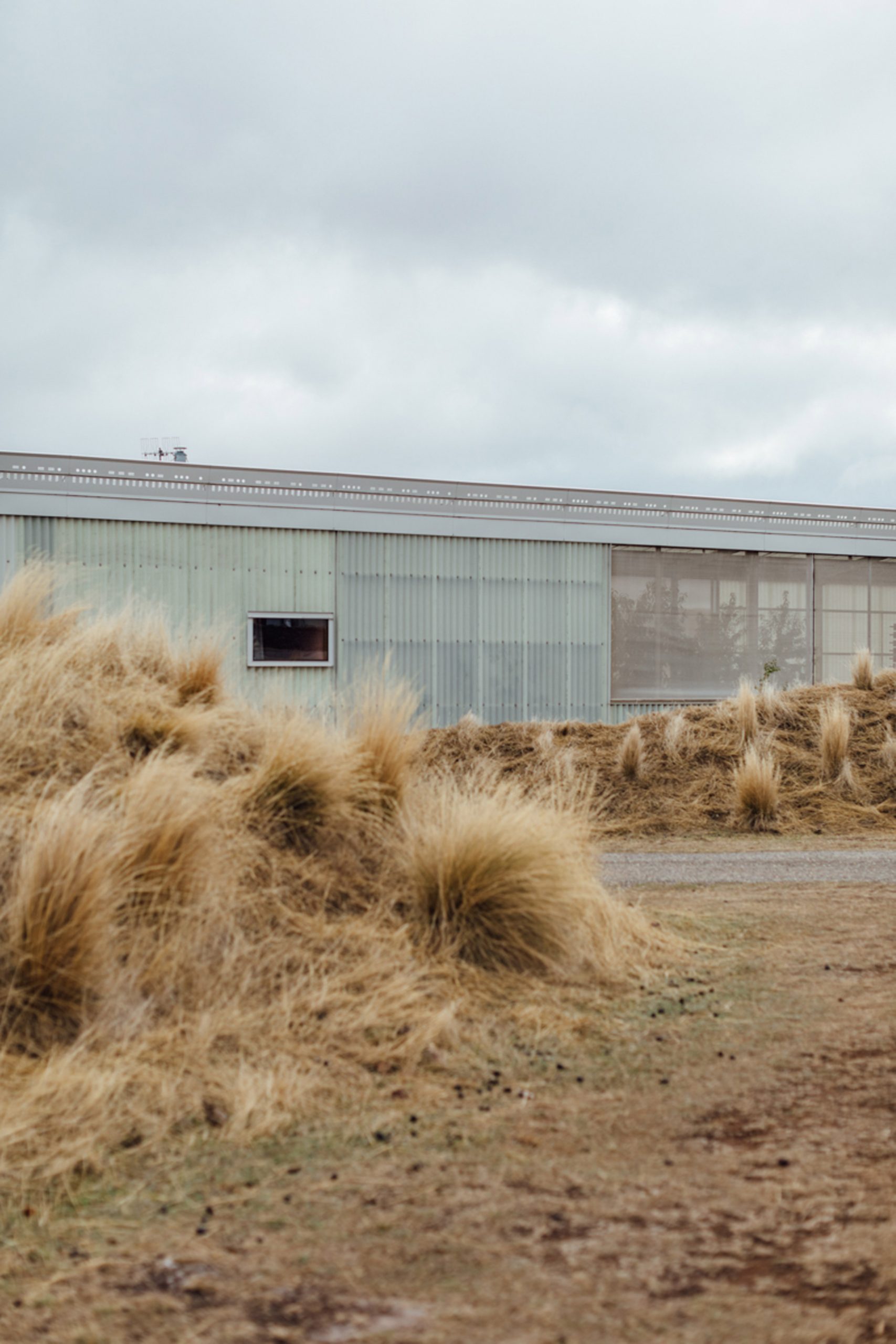 “The Longhouse recalls a Palladian tradition of including living, working, storing, making in a single suite rather than referring to the Australian habit of casual dispersal,” said the practice’s founding partner, Timothy Hill.

“It emphasises how much – or how little – you need for a few people to survive and thrive. A handful of animals, enough water and year-round crops.” 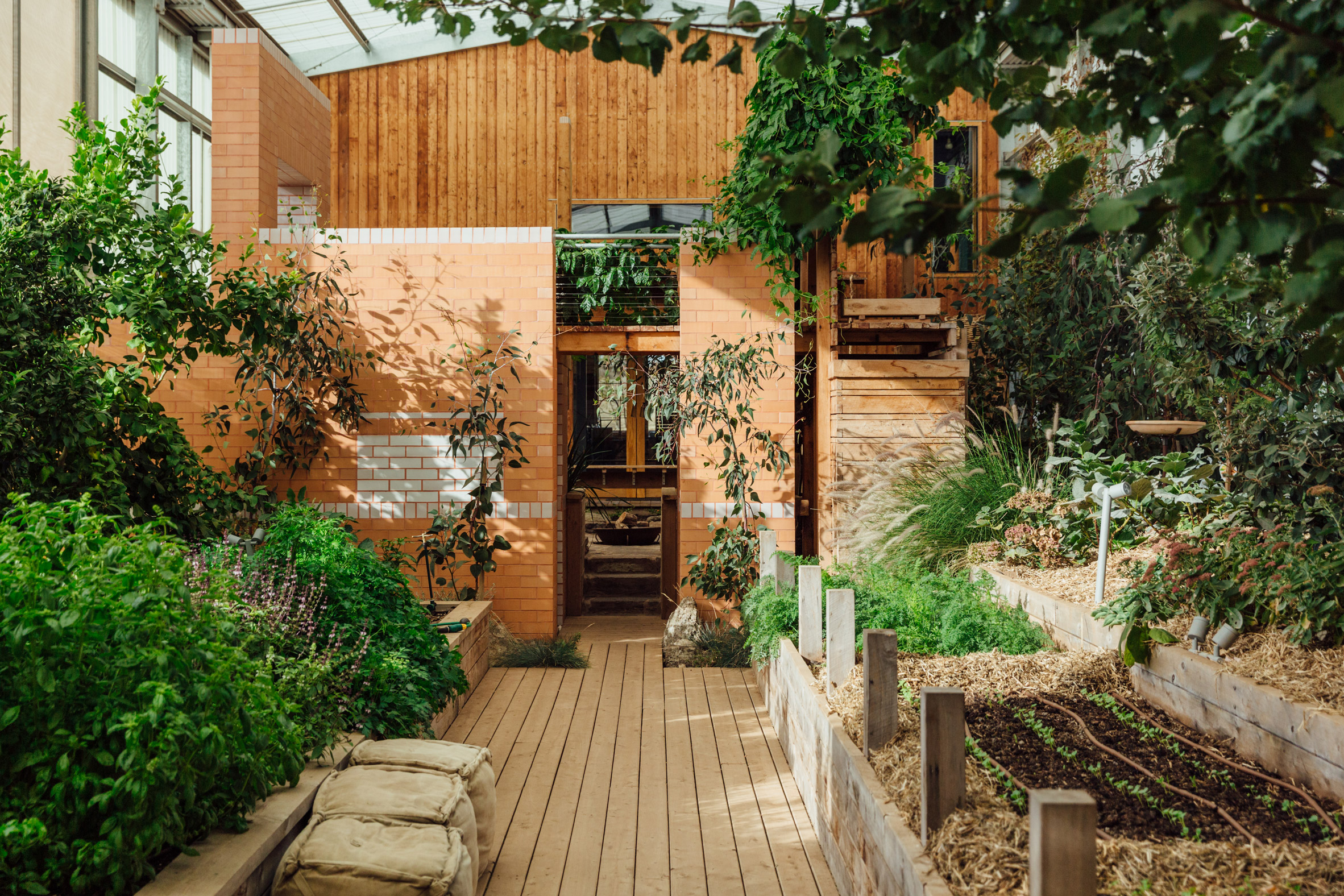 Nestled amongst a 20-acre plot of land just outside the town of Daylesford, the 110-metre-long building overlooks rolling plains of bushland.

Goren and Streeter were charmed by the site’s natural vistas but, after several visits, came to realise that the area was subject to extreme weather conditions including strong winds, erratic downpours of rain and snow during the colder months.

A variety of animals such as kangaroos, wallabies and foxes could also be found roaming the site. 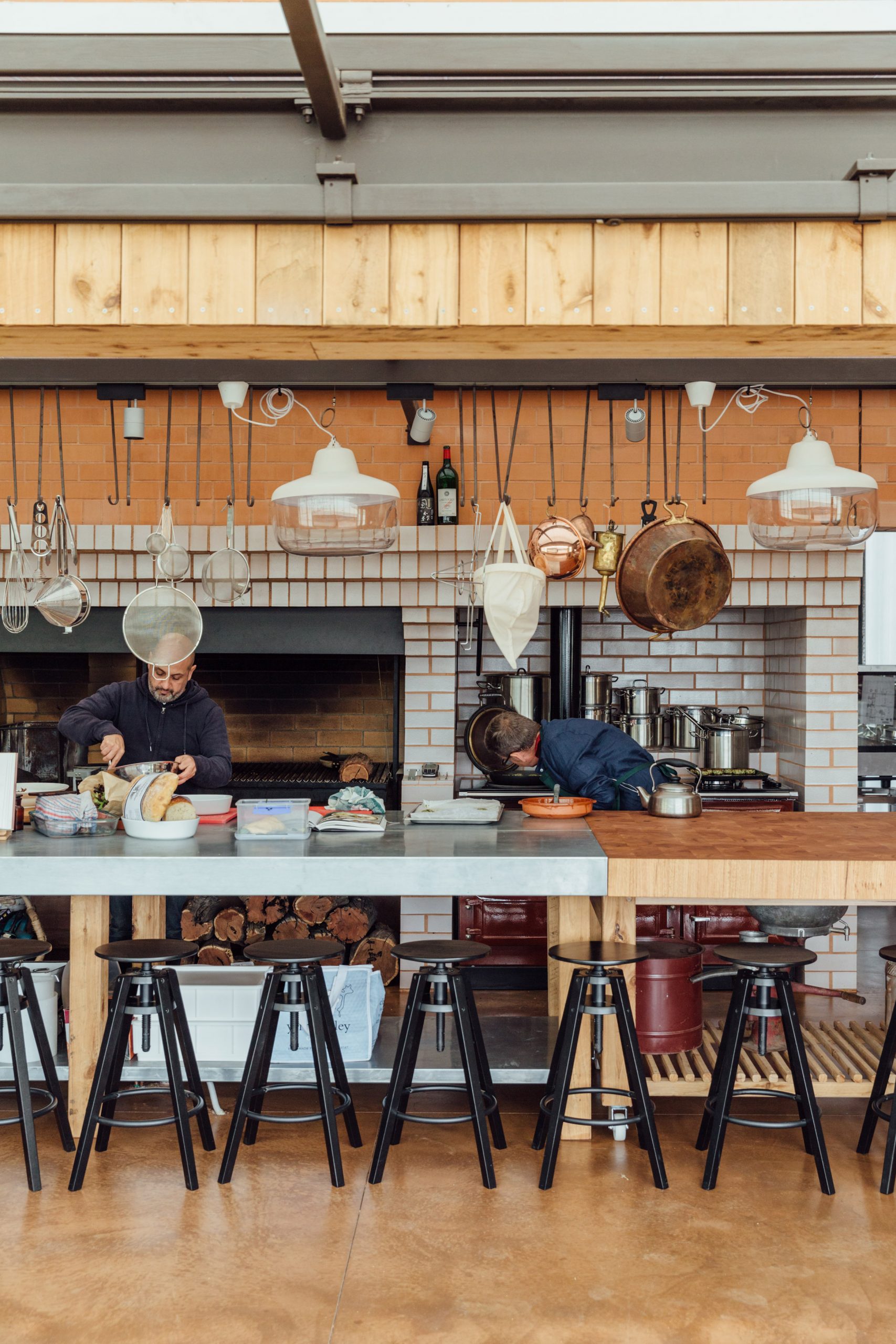 This “beautiful but hostile” environment is what encouraged Partners Hill to design Longhouse as a huge shed-like structure which would be “big enough and protected enough for the landscape to flourish inside”.

Translucent panels of glass-reinforced polyester wrap around the exterior of Longhouse, which is punctuated by a series of windows that offer views of the landscape. 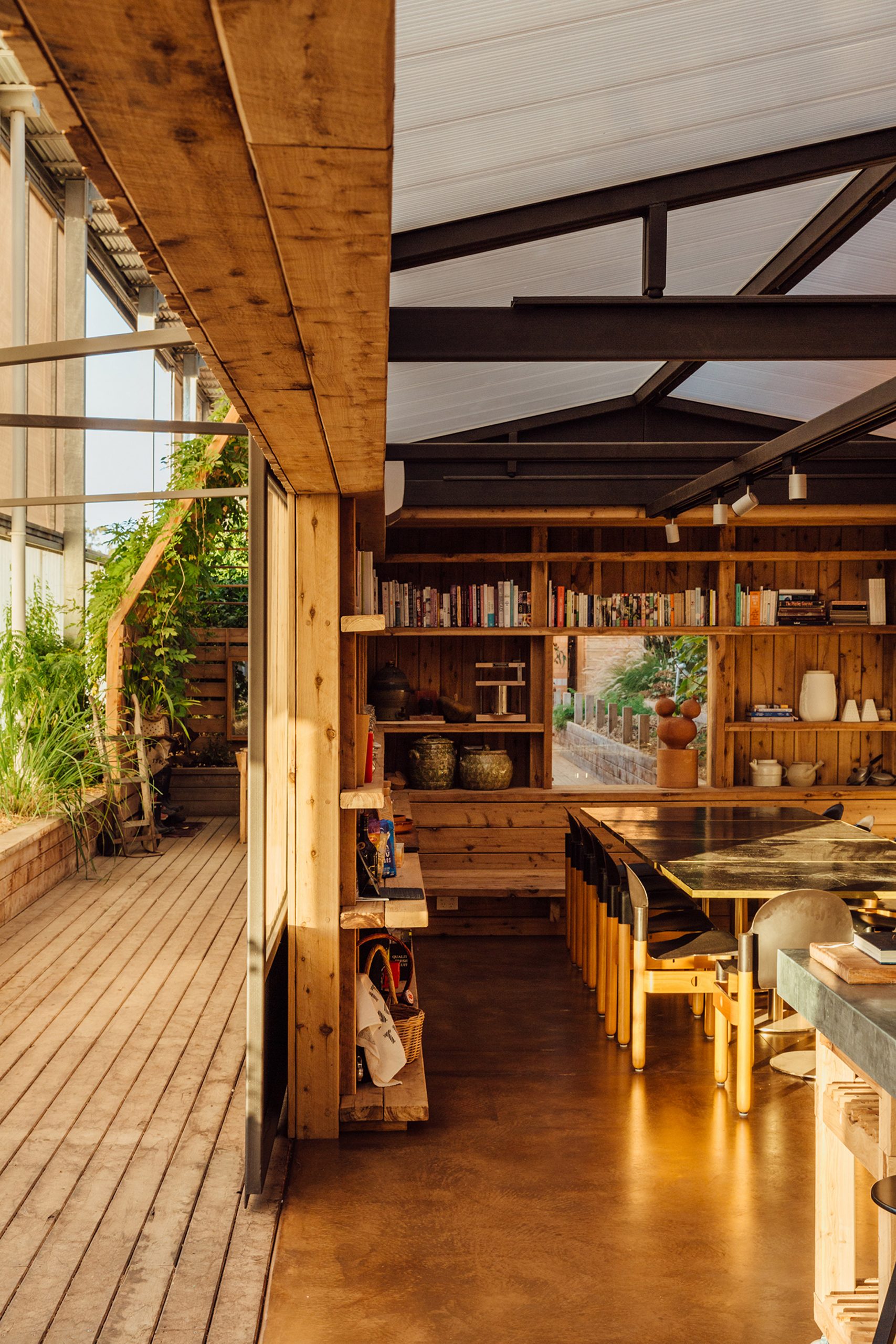 “Panels with different finishes have also been deployed to optimise solar penetration and shading depending on the orientation of each facade and roof plane.” 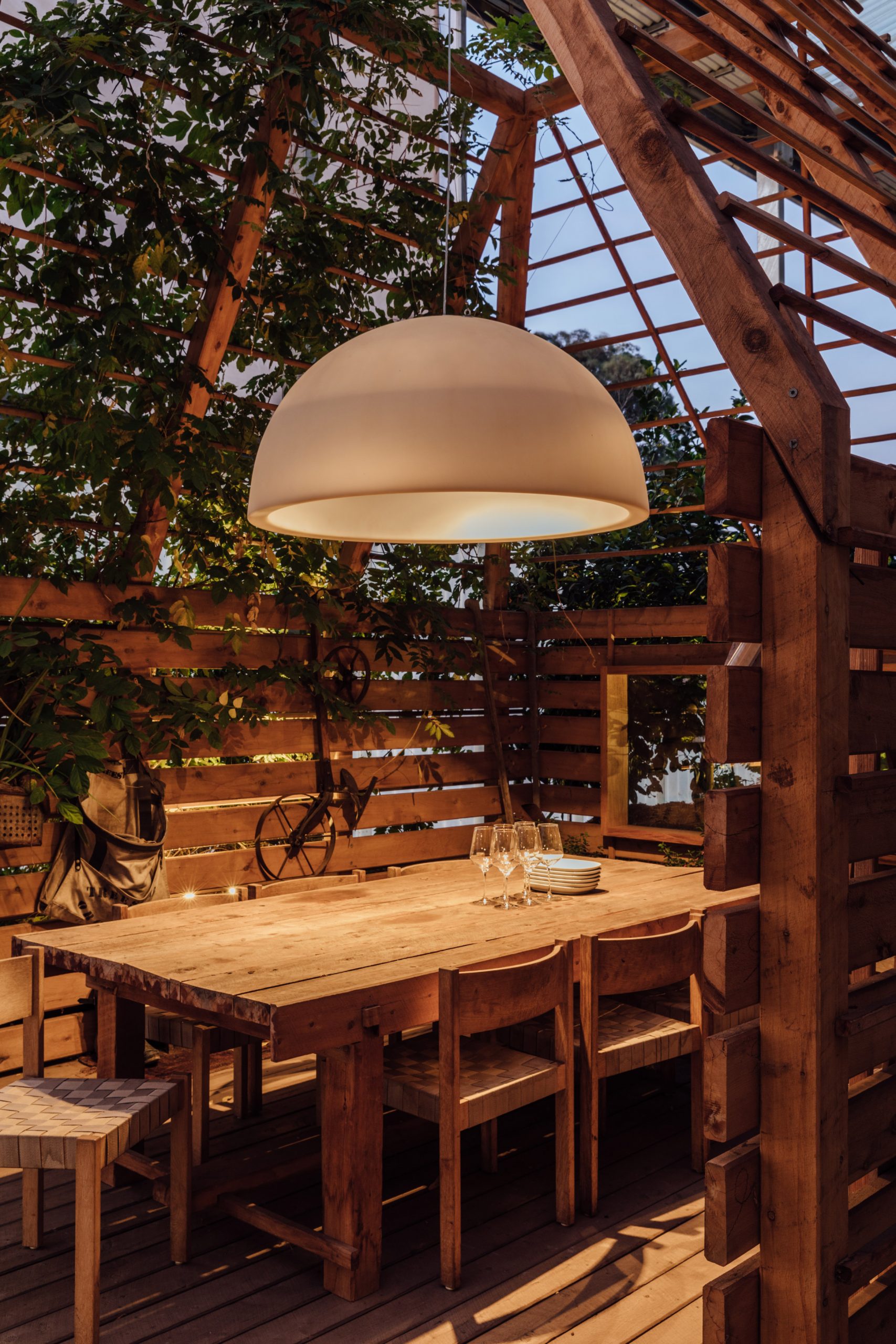 An algorithm was used to design the home’s 1,050-square-metre roof, which has been specifically sized to harvest an optimum amount of rainwater.

Any water collected is stored in a series of tanks around the site – some of which are concealed by grassy banks – and can be used to service different rooms. It can also be used in the event of a bushfire. The main entrance to Longhouse is at the western end of the building, which plays host to a sizeable garage for storing farm machinery and an enclosure for the cows, pigs and fowl.

A short walkway leads through to the kitchen where cookery workshops are held and meals are rustled up for guests dining at Longhouse. Designed to appear as a “surprisingly lush haven”, the space is bordered by leafy trees and plant beds overspilling with foliage.

Vine plants also wind down from the ceiling. 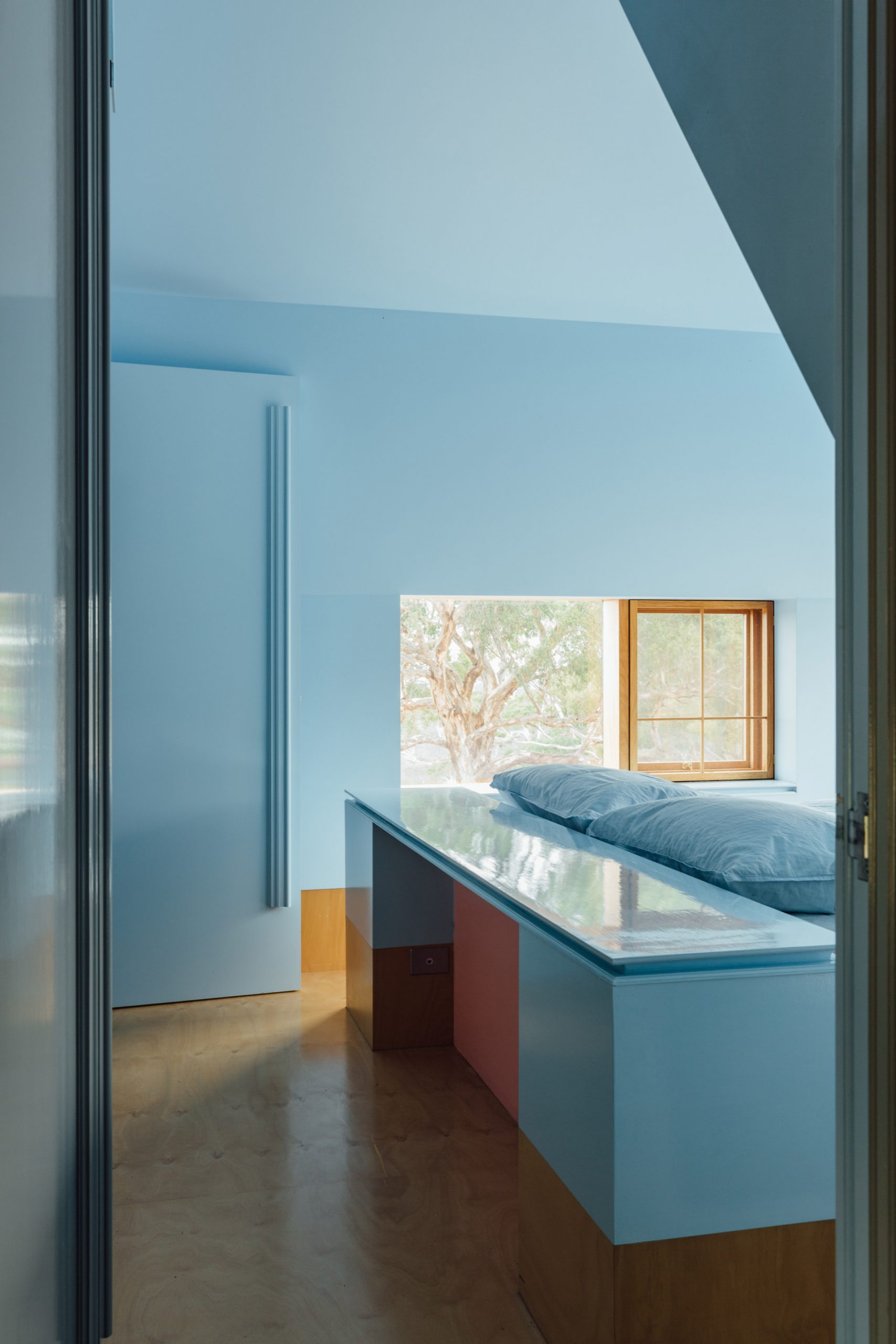 Australian cypress pine has been used to craft a majority of fixtures and furnishings, selected by the practice for its resistance to rot.

The same timber has been combined with red bricks to form a couple of gabled structures that accommodate cosy eating areas.

Some elements, like the kitchen hearth, are built from glazed clay tiles.

A set of stairs leads up to the guest rooms on the first floor, referred to as The Stableman’s Quarters. One of them features warm orange walls and is centred by an oversized daybed piled high with plump cushions. 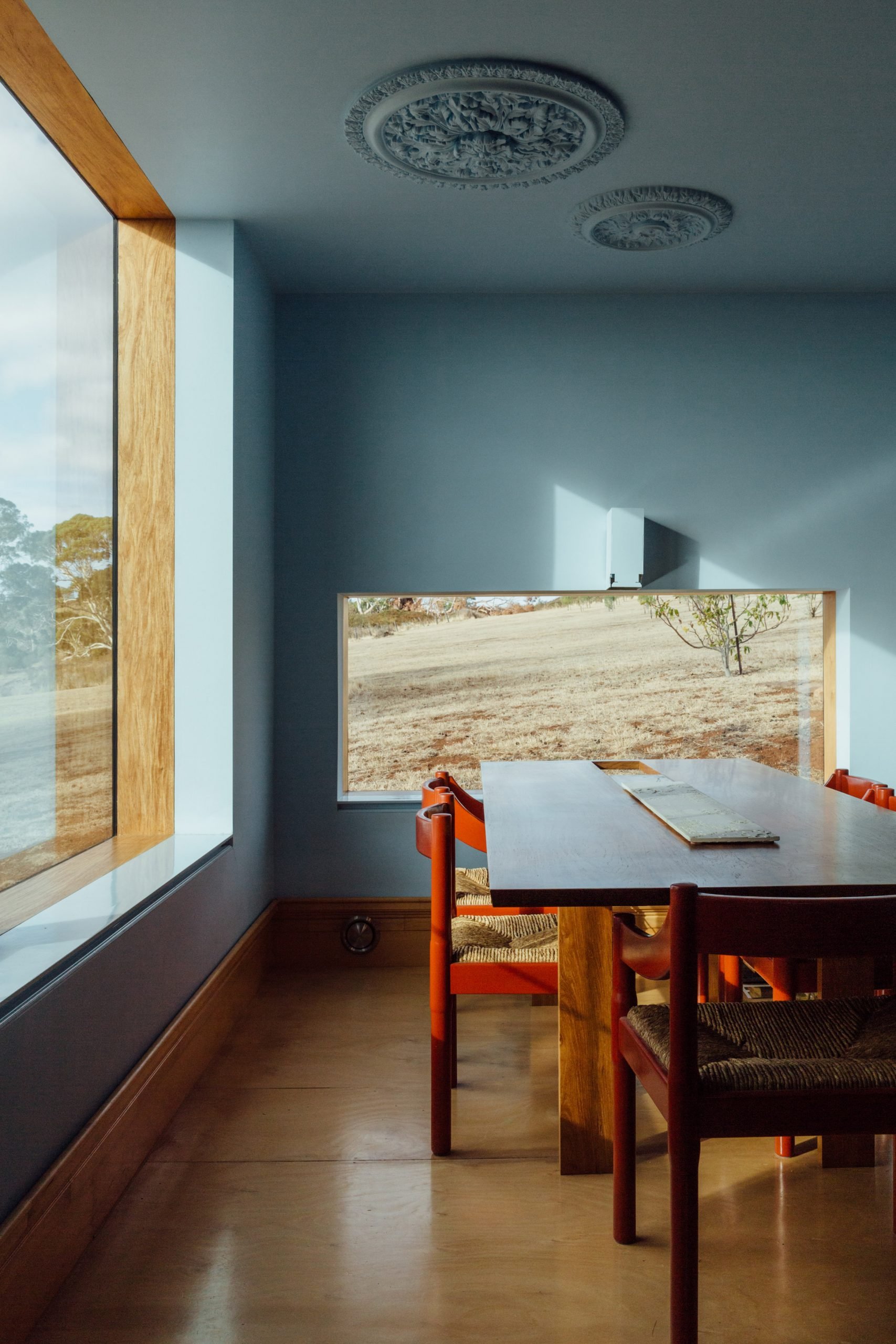 Goren and Streeter’s private living quarters, nicknamed The Lodge, are also located on Longhouse’s first floor. Surfaces throughout have been painted a pale shade of blue.

“Even in the depths of cold, grey winters – there is an uplifting sense of blue skies and long sunsets every day,” added the practice.

In a nod to the owners’ passion for 19th and 20th-century interiors, the practice has also included a handful of decor elements that “recall the manors of a bygone era” such as clawfoot bathtubs and ornate ceiling roses. 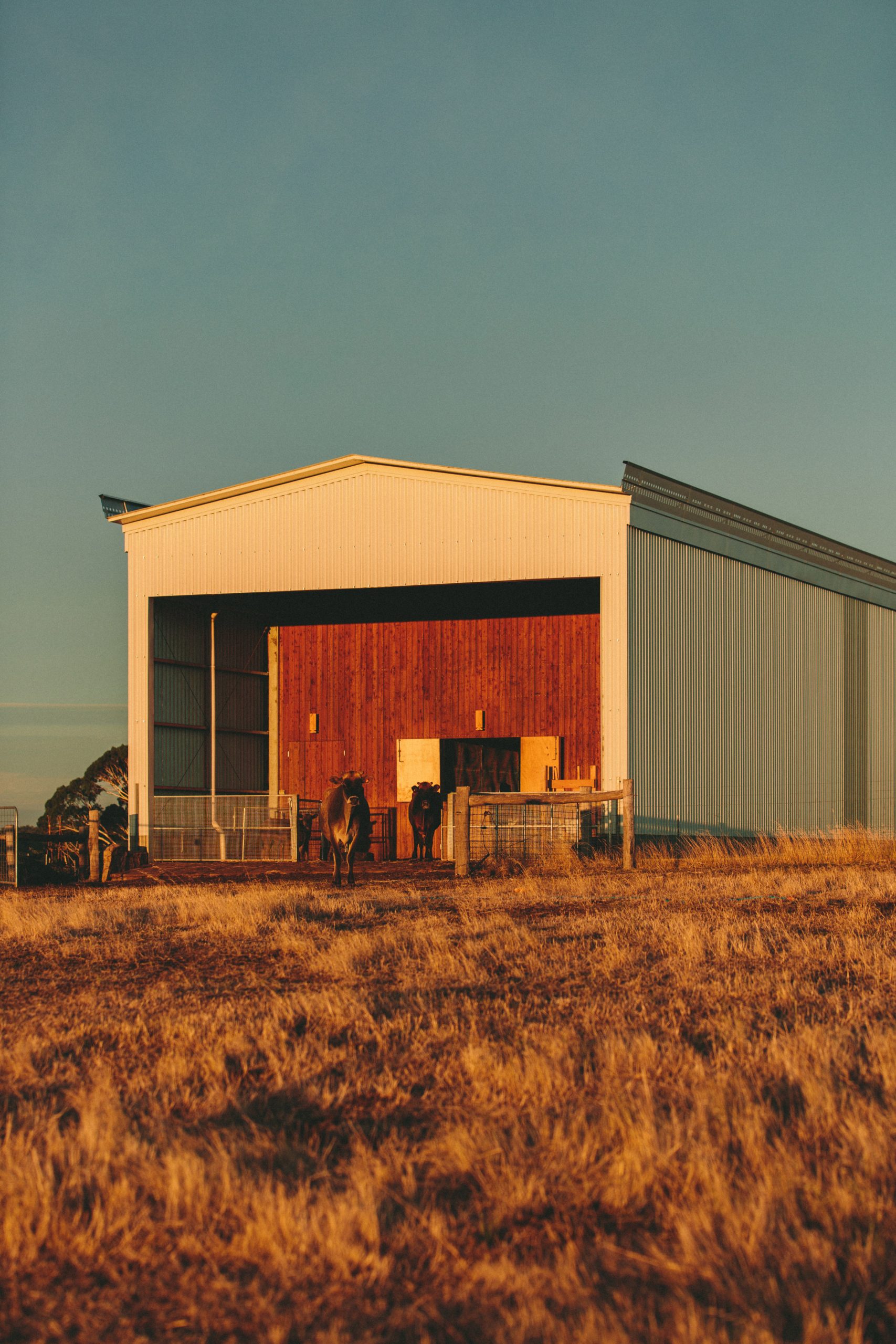 Partners Hill is led by Timothy Hill, Simon Swain and Domenic Mesiti. Previous projects by the practice include a wooden pavilion for skincare brand Aesop – the structure was specially created for a Tasmanian music festival and was shrouded by shrubbery.

Photography is by Rory Gardiner.