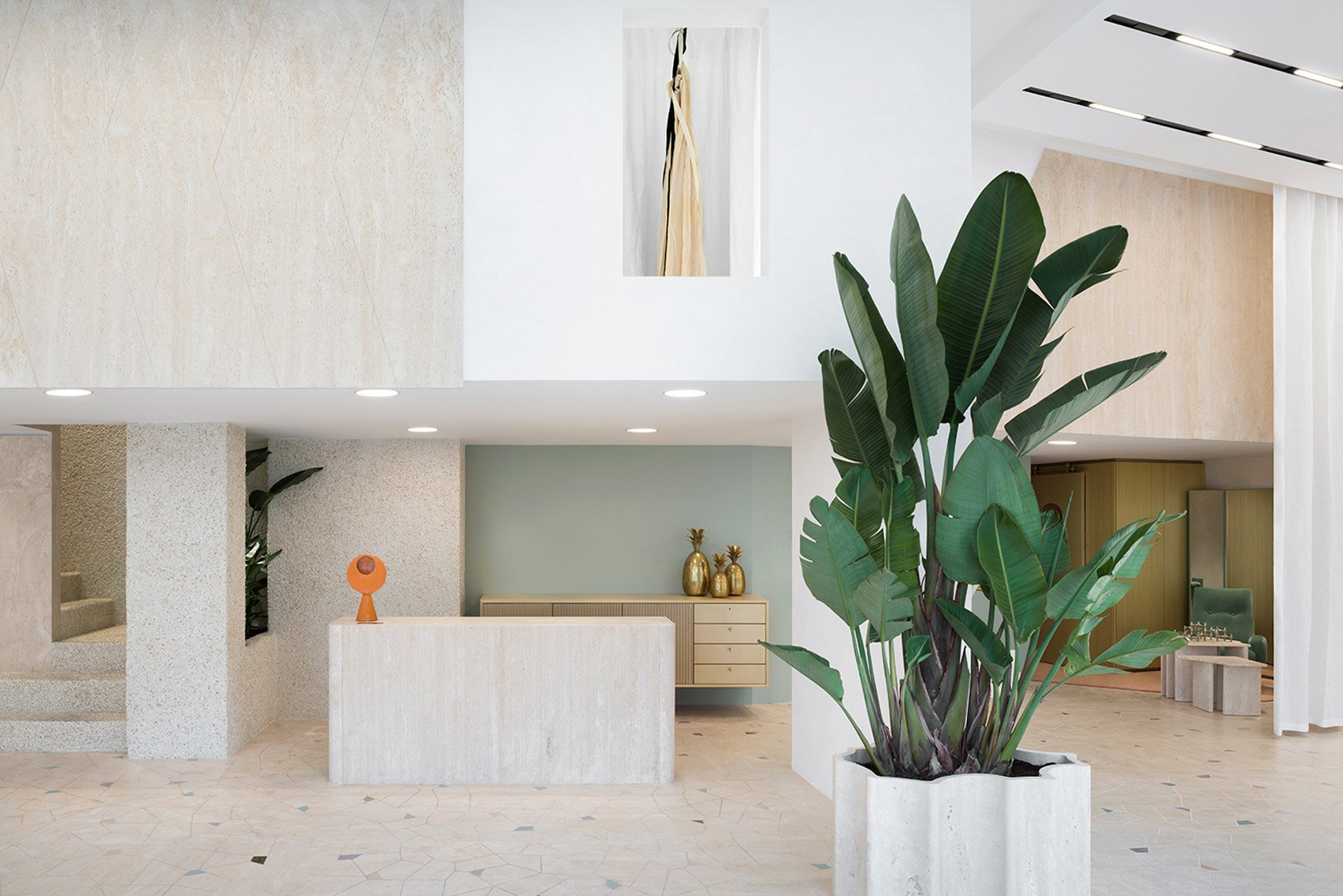 The store is situated in the historic Brera district, an area of Milan recognised for its art galleries and selection of design boutiques. It is the first physical retail space for Forte Forte, which until now has exclusively sold women’s clothing and accessories online.

Brand co-founder Giada Forte turned to her partner, art director Robert Vattilana, to develop an aesthetic for the inaugural store, asking that it reflect the “tactile, atmospheric, and dreamy values” of the clothing items. 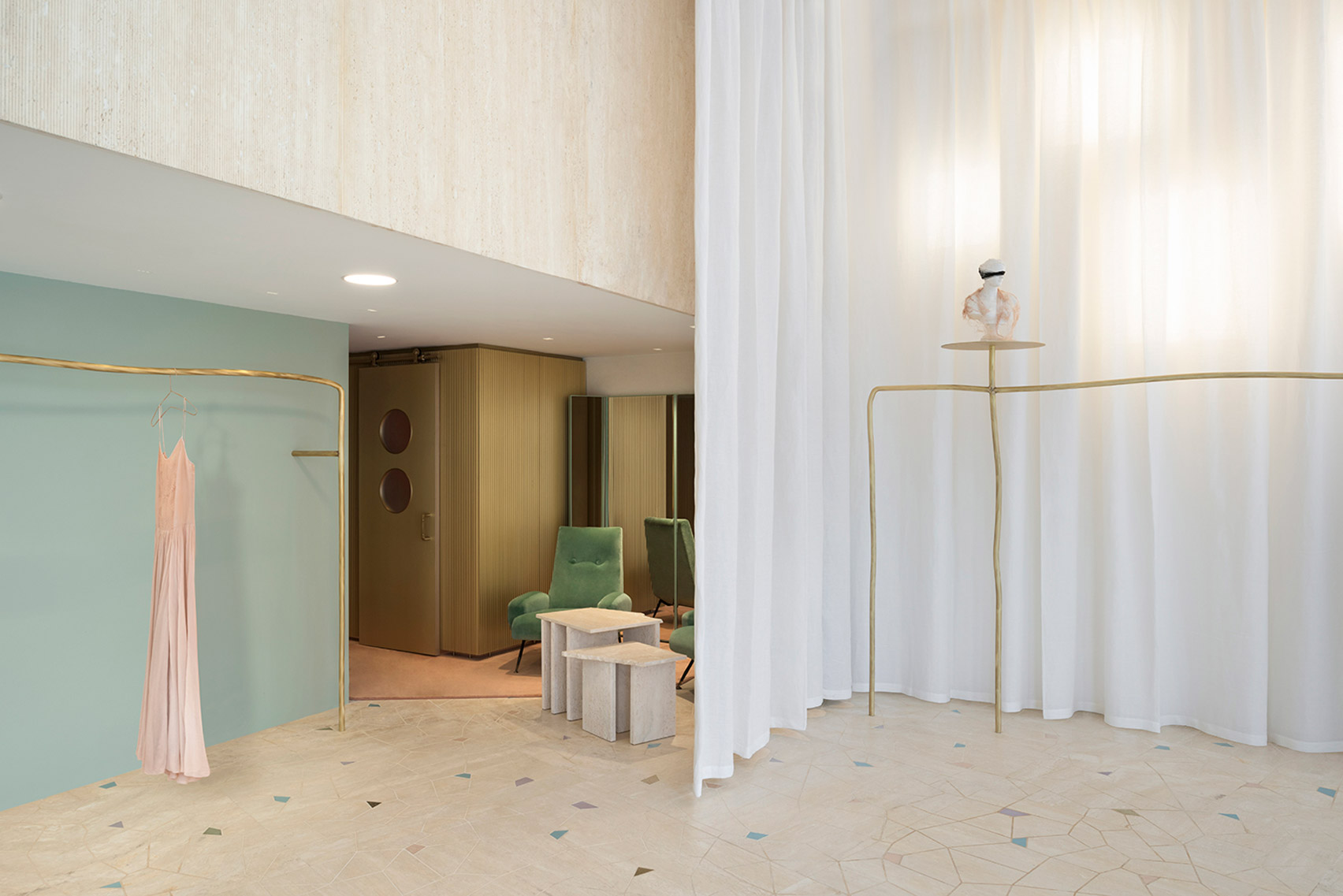 Vattilana began by stripping back the site to an empty shell. Excluding a handful of partitions that have been painted jade green, the majority of surfaces have been clad in beige-hued travertine marble.

Grooved panels feature on the upper walls, while small pieces of the stone have been arranged to form a mosaic floor that’s dotted with offcuts of coloured glass.

“The primary concept was also to create an atmosphere capable of presenting and emphasizing the collection,” Vattilana explained to Dezeen. 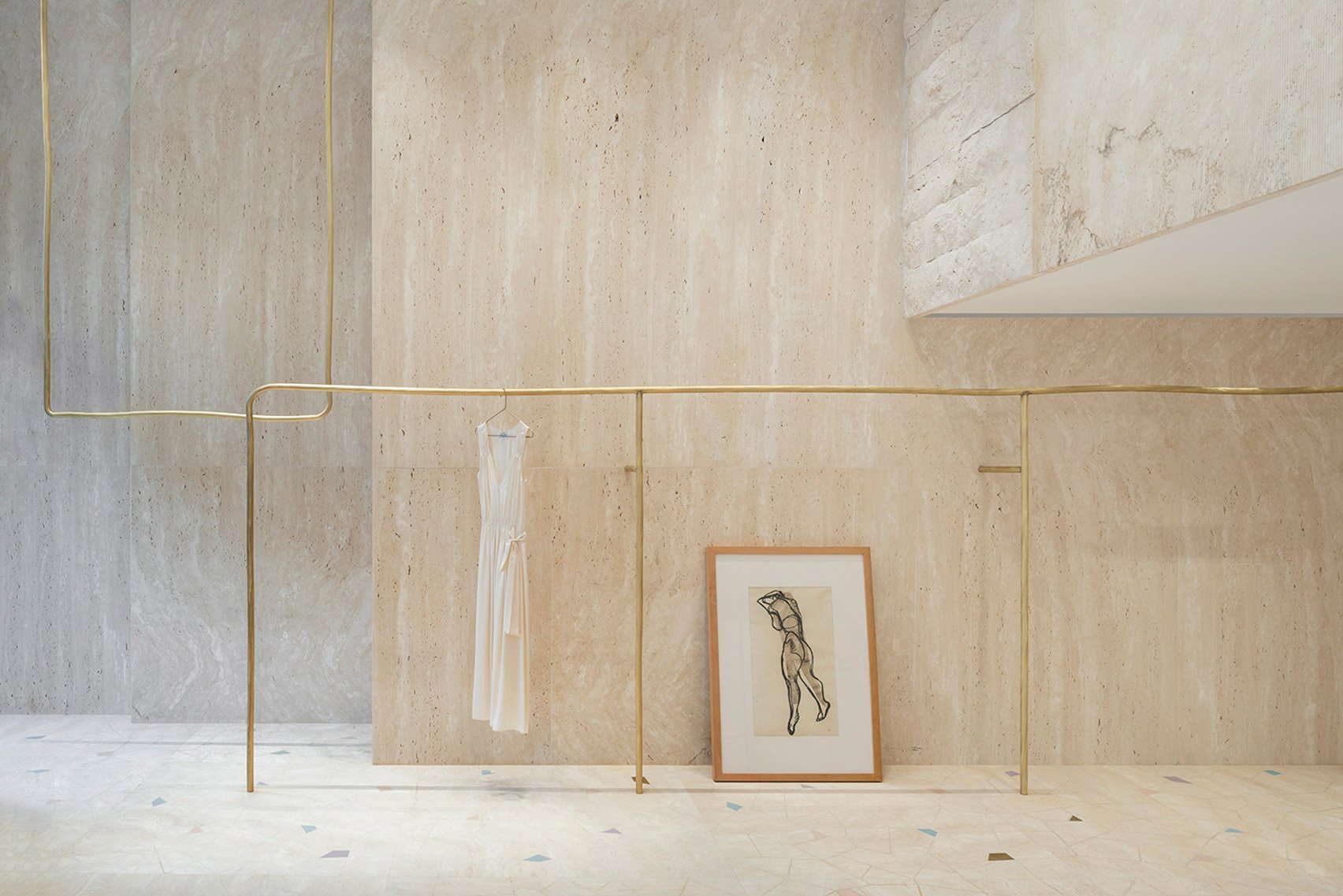 A gauzy, full height curtain has also been drawn across the store’s front display window. In front of the window sits a “sculptural curtain” comprised of thin brass wires that link together in a ladder-like formation.

It’s adorned with small globular sculptures by Italian glassware brand Massimo Lunardon, inside of which are contained seemingly random items like spindles of yarn.

Other items including lumps of coral, a nude sketch by Belgian artist Didier Mahieu, and a bust of the Roman goddess Venus that was sourced in a French foundry, have also been scatted throughout the space. 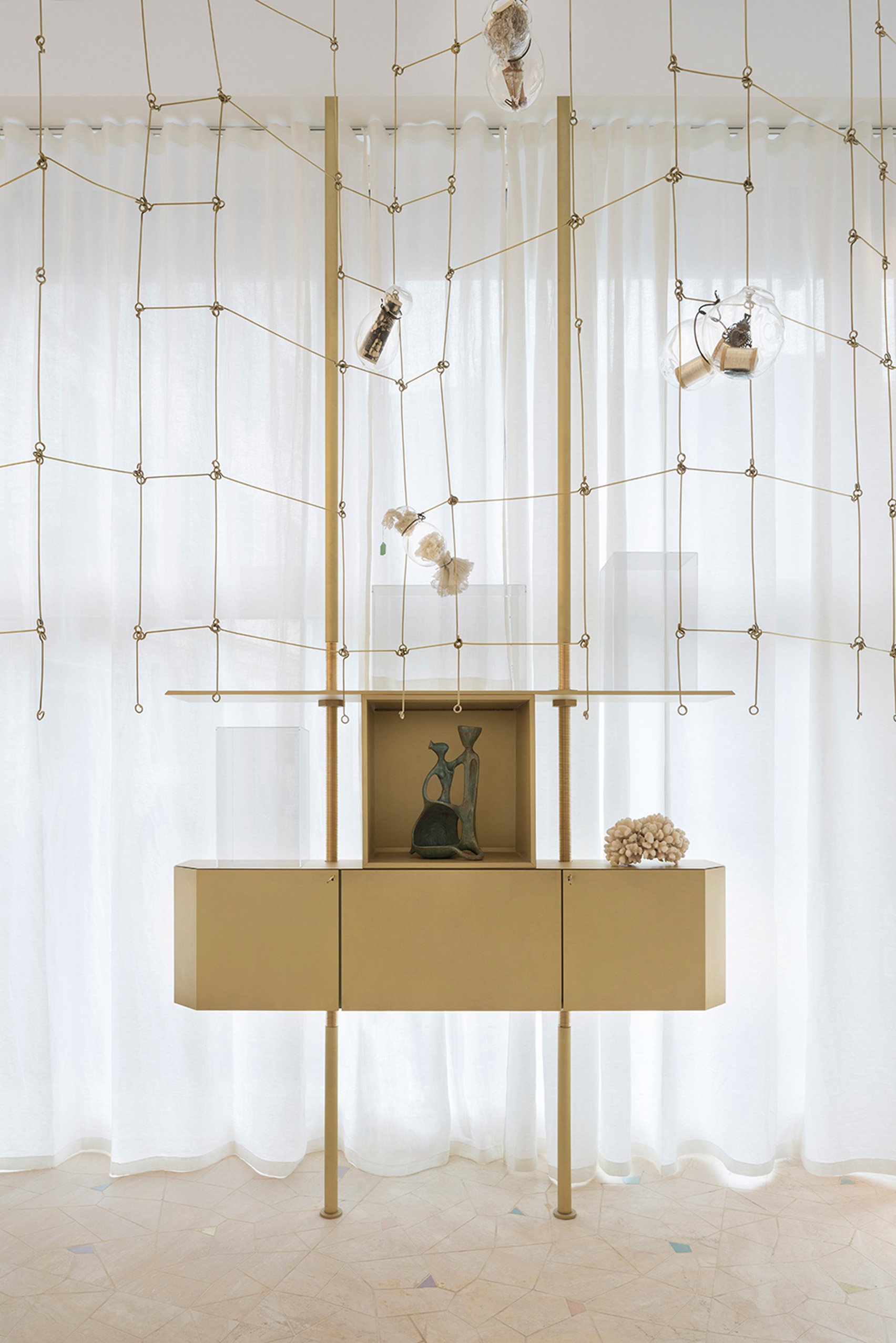 Garments are hung from spindly brass rails, complemented by organically-shaped mirrors that are edged in gold-hued metal.

Peach carpet has been laid down in the store’s rear changing area, which has been designed to resemble a passenger cabin on a 1940s steam train – doors have been completed with portholes, while walls are upholstered with buttoned, blush-pink velvet. 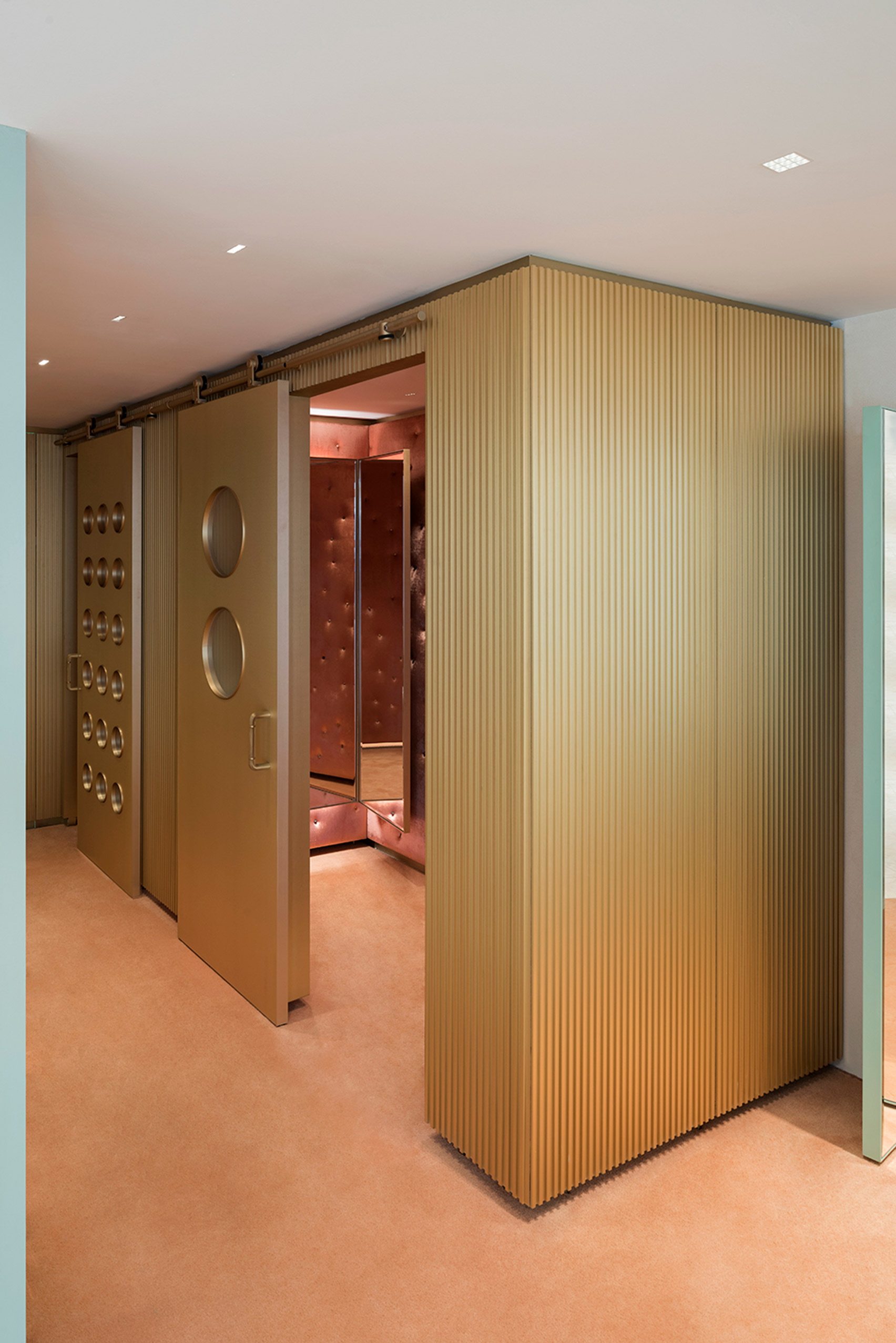 Photography is by Paola Pansini.

The post Fashion sits alongside found objects at the Forte Forte boutique in Milan appeared first on Dezeen.