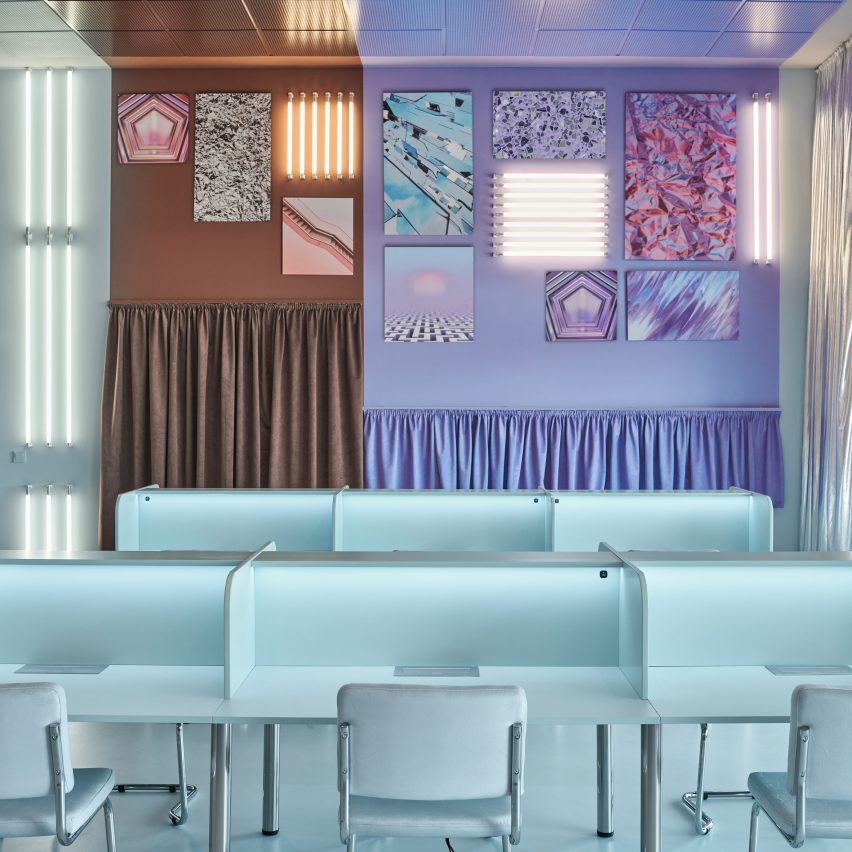 The 1960s film Playtime by renowned French director Jacques Tati set the tone for this whimsical co-working office that Masquespacio has designed in Valencia.

Cabinette is a co-working space for creatives set inside a mixed-use building in Valencia’s La Fuensanta neighbourhood. 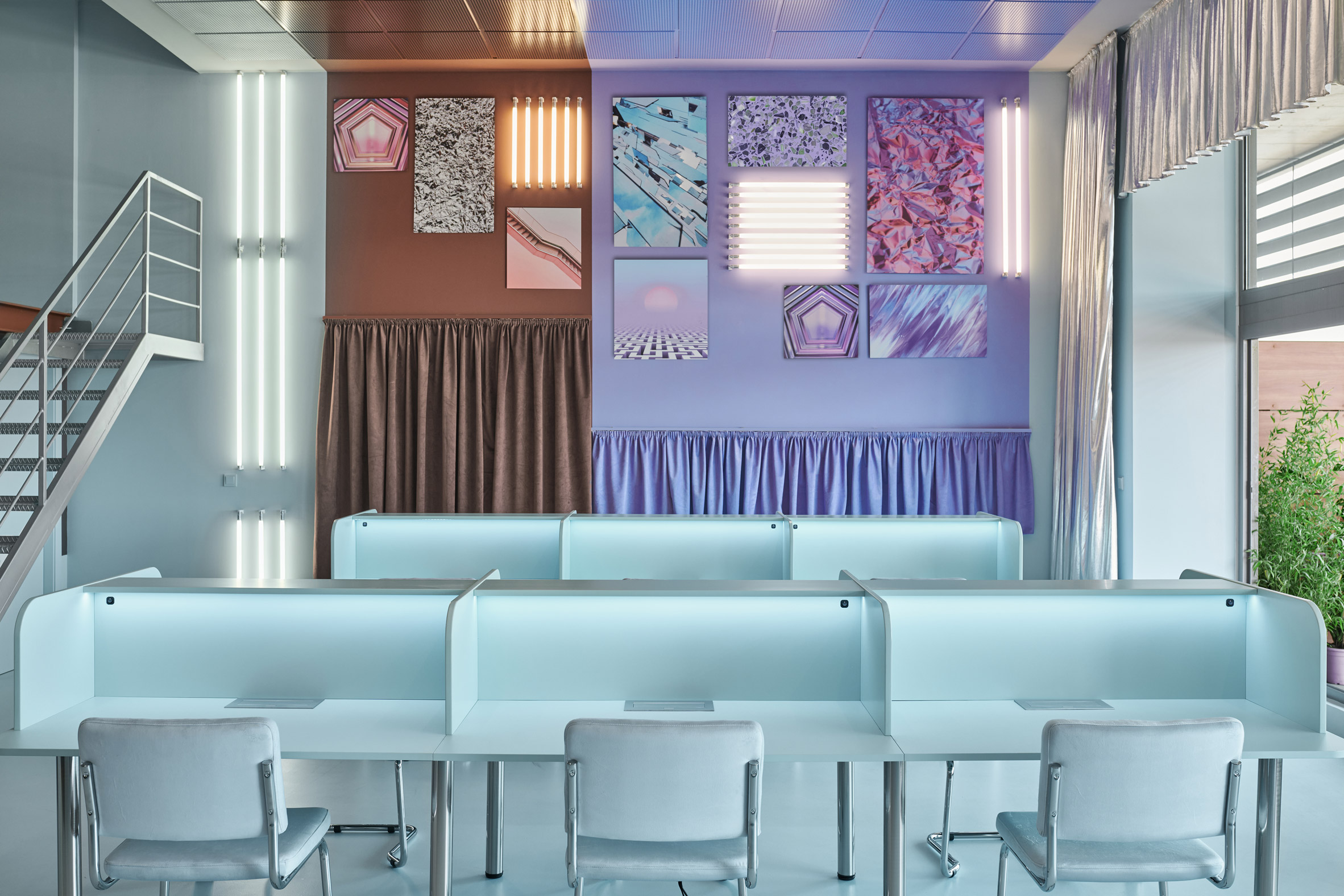 It takes over a ground-floor unit that was originally fit-out to serve as an apartment. Leaving the existing bathroom facilities in place, interiors studio Masquespacio reconfigured the rest of the floor plan to accommodate a series of work areas for Cabinette’s members.

The studio’s founders, Christophe Penasse and Ana Milena Hernández Palacios, wanted to give the 200-square-metre space a retrofuturist aesthetic that’s attractive to millennials but also makes “a clear wink to the past”. 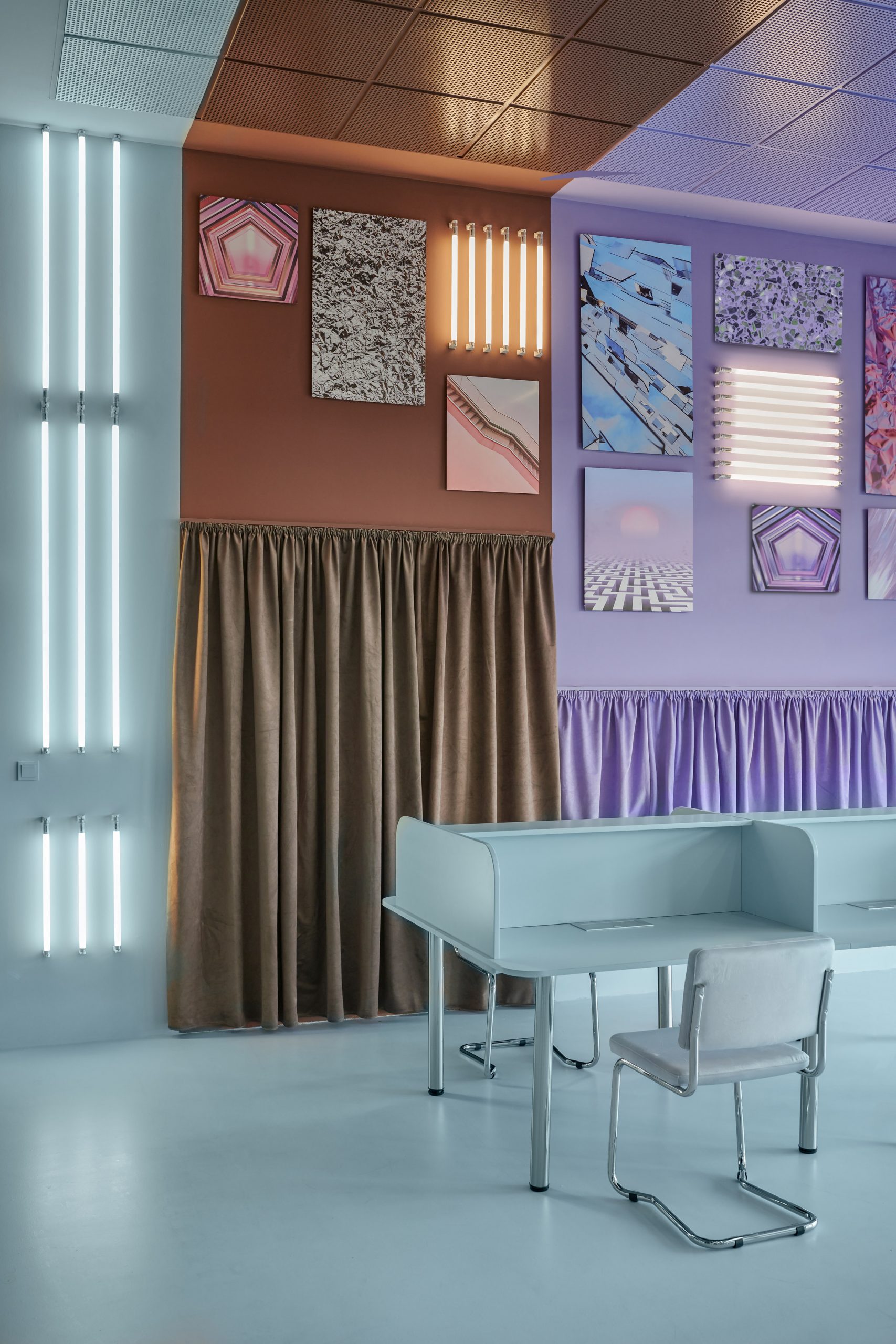 A particular point of reference was Playtime – a 1967 comedy film directed by Jaques Tati that follows character Monsieur Hulot as he navigates a gadget-filled version of future Paris.

It’s revered for its satirical take on modern life and was also included in Dezeen’s list of 10 films with amazing architecture.

“We once visited a museum installation here in Valencia where they showcased some fragments of the movie, especially a moment where the leading actor goes to a meeting,” Penasse told Dezeen. 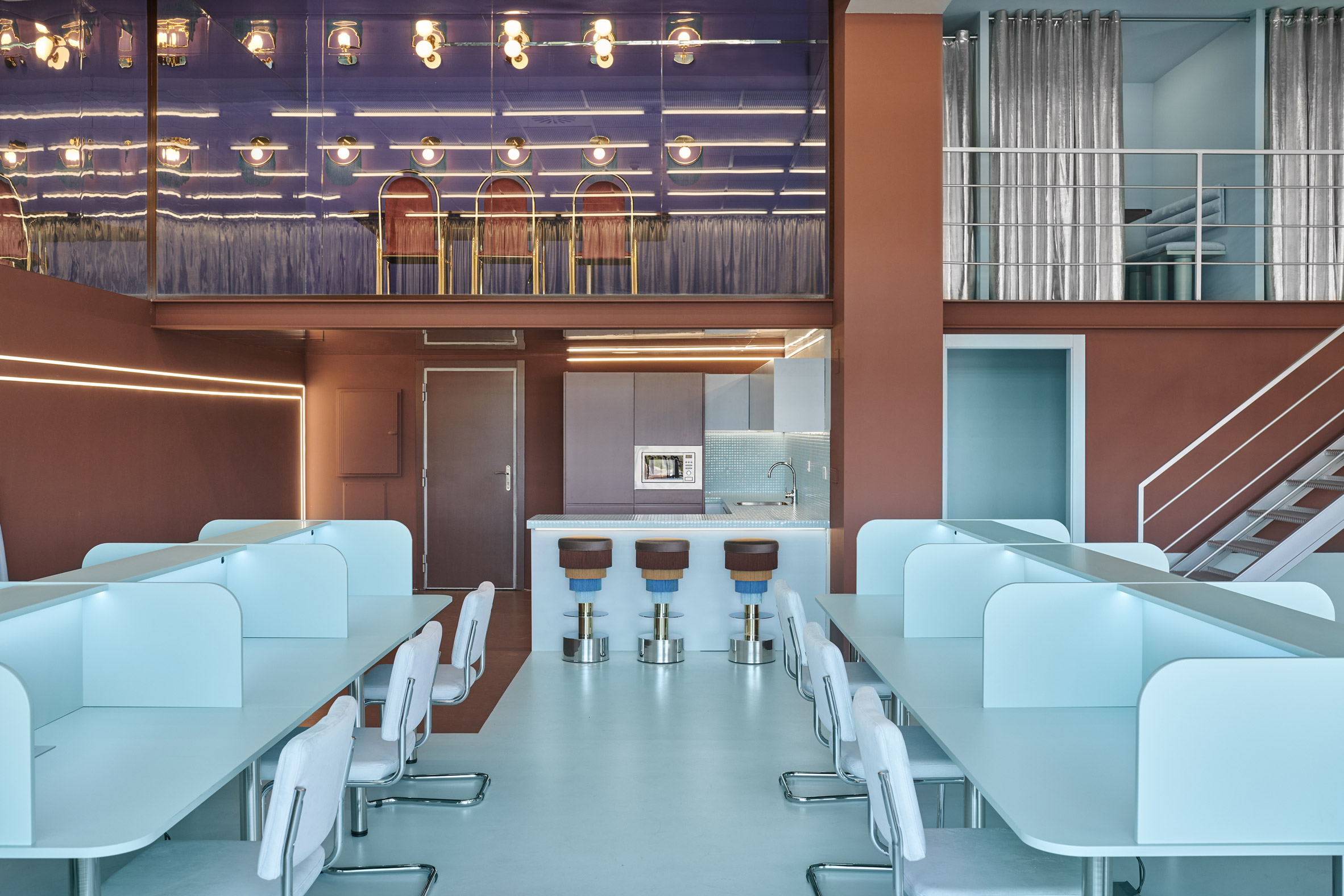 In the film, when Hulot arrives at the meeting, he enters a huge office where each employee’s desk is closed in by a cabinet-lined box – a feature which inspired Cabinette’s name.

Penasse and Palacious have similarly divided desks in the co-working space, but instead of individual boxes have erected low-lying partitions.

As with the interior of the boxes in Playtime, the desks and chairs in Cabinette are a pastel green-blue colour. 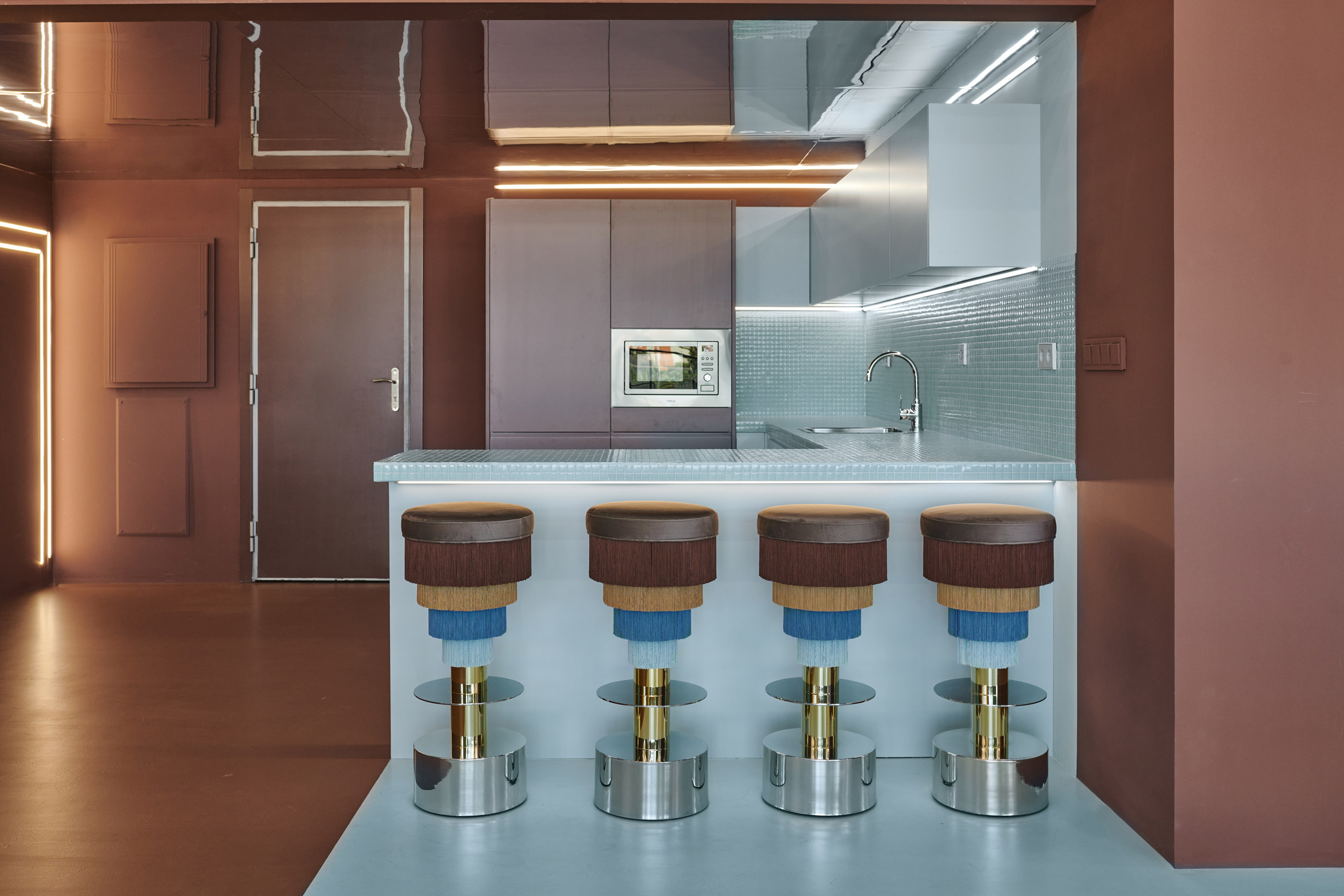 The same colour features across the floor, as well as the counter, tiled splashback and a couple of cupboards in the kitchen, which sits in the corner of the room.

Walls and part of the floor here are painted chocolate-brown, complementing the steel stools from Masquespacio’s Déjà-Vu collection that appear beside the counter. They each feature tiers of brown, ochre and blue fringing.

Another wall in Cabinette is clad in mirrored panels, while one on the far side of the office is a bright lilac hue. It’s decorated with various graphic-print canvases and rows of illuminated tube lights. 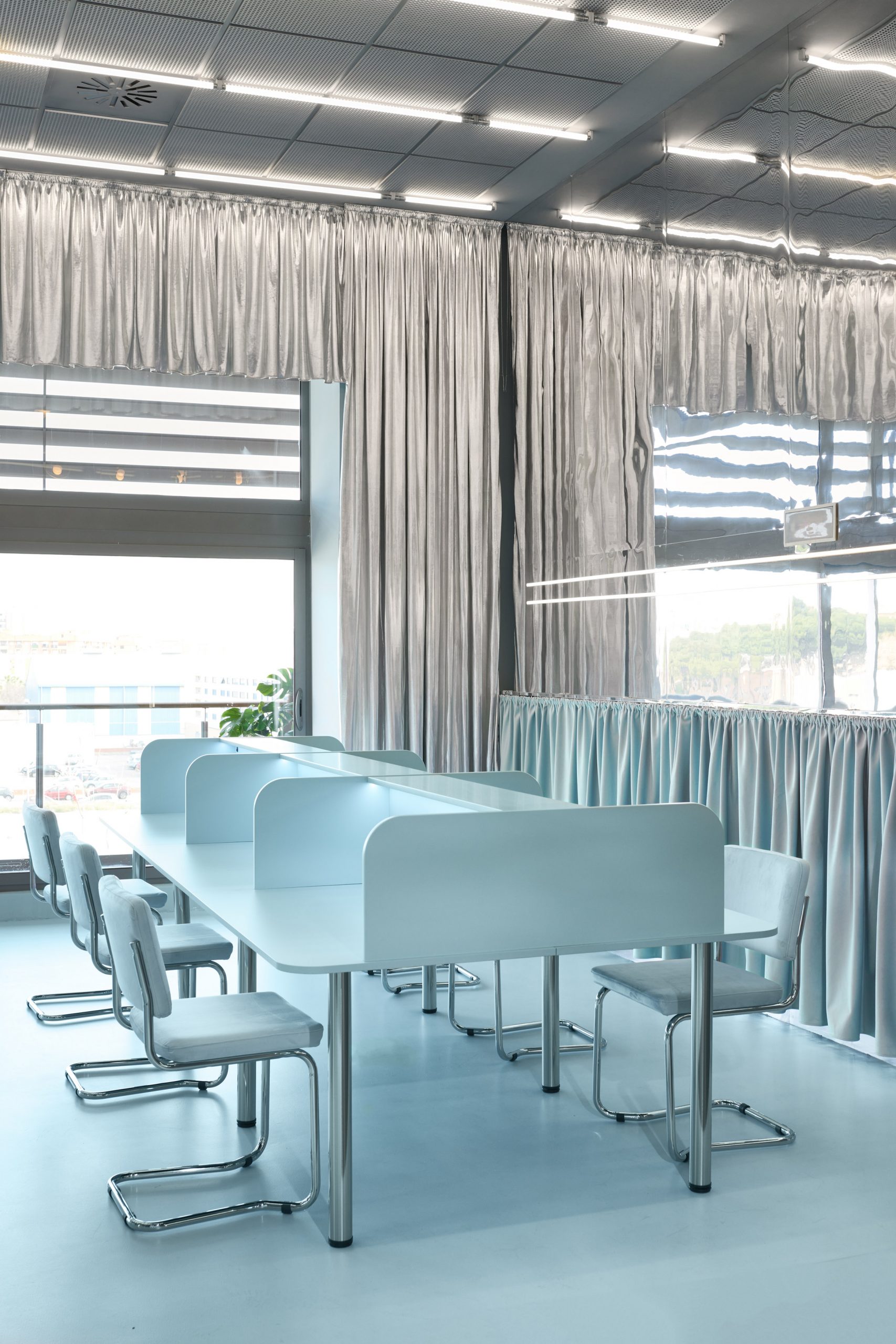 A set of stairs leads up to a mezzanine where there are a pair of intimate meeting rooms that members can use for group work or take private phone calls.

They’re screened off by the same shiny silver curtains that hang in front of the full-height windows at ground level that look through to an outdoor terrace. 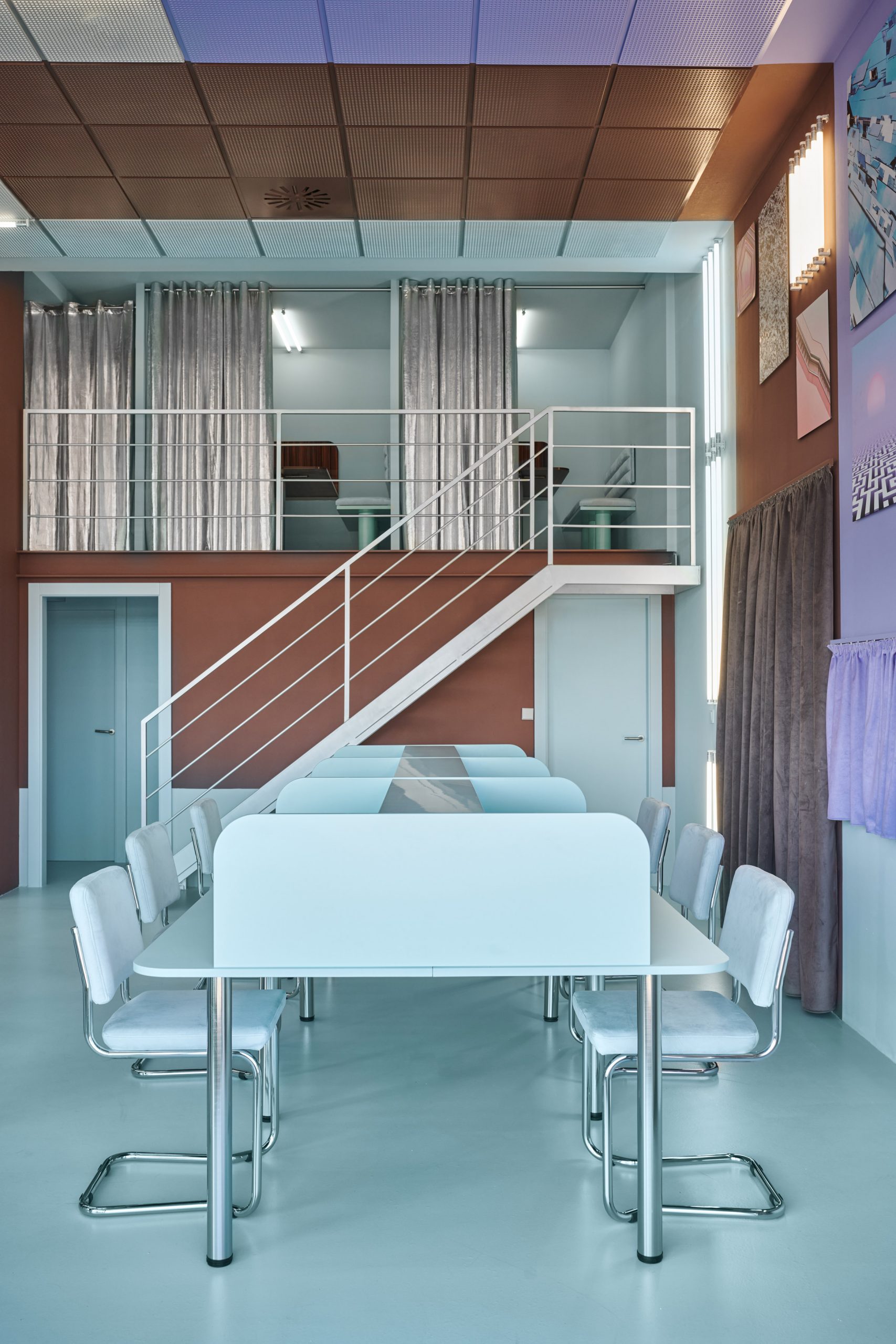 There is also a more formal boardroom that features deep-purple surfaces. The central lacquered-wood table is surrounded by Masquespacio’s gold-framed Arco chairs, which are upholstered in burnt-orange velvet.

The studio’s eye-shaped Wink lights are also mounted on the wall. 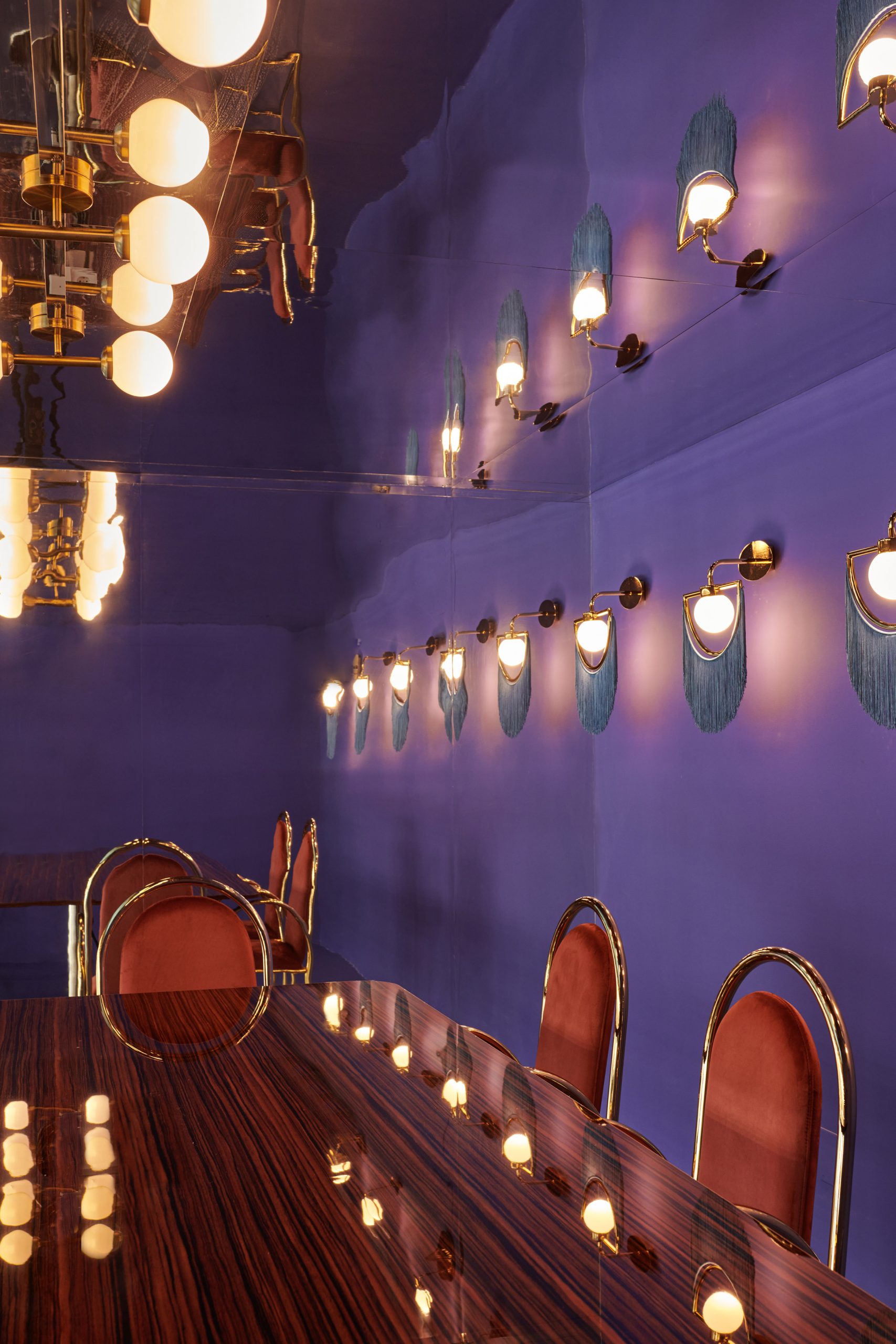 Masquespacio was established in 2010 by Penasse and Ana Milena Hernández Palacios. The studio has applied its colourful aesthetic to a number of projects.

These include a phone repair shop that features a clashing mix of salmon-pink and turquoise surfaces, and a tropical green and maroon restaurant that offers Brazilian-Japanese cuisine.

Photography is by Luis Beltran.