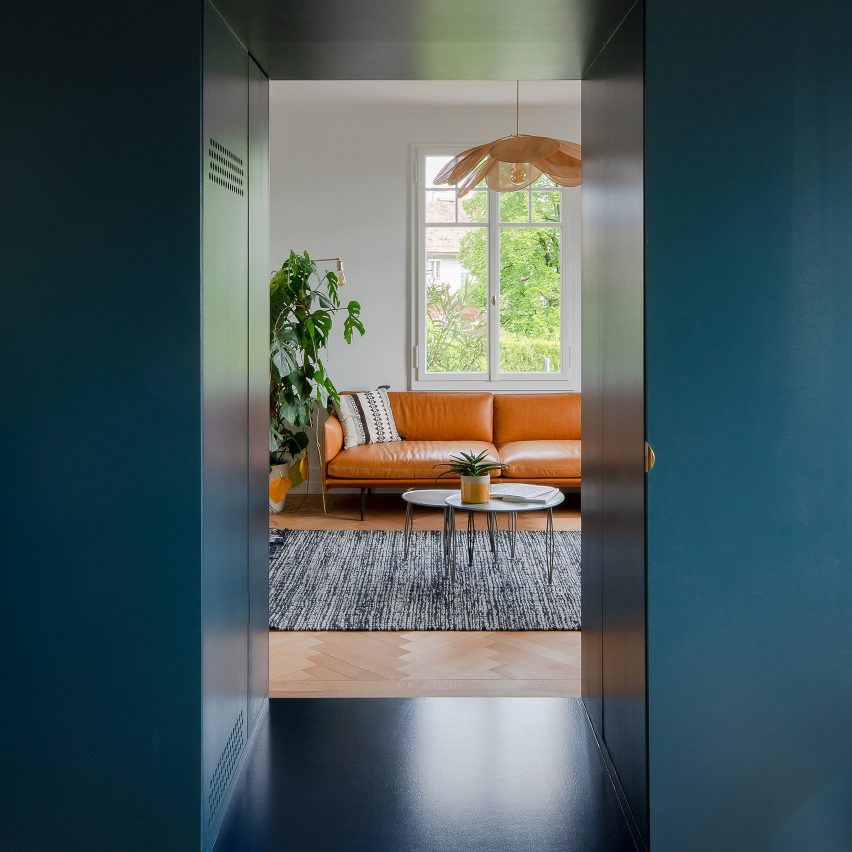 A sea-blue storage unit helps arrange living spaces inside this family home in Corseaux, Switzerland, which has been overhauled by Bureau Brisson Architectes.

Situated close to the shore of Lake Geneva, the 1920s home has been overhauled by Bureau Brisson Architectes to feature a much simpler floor plan. 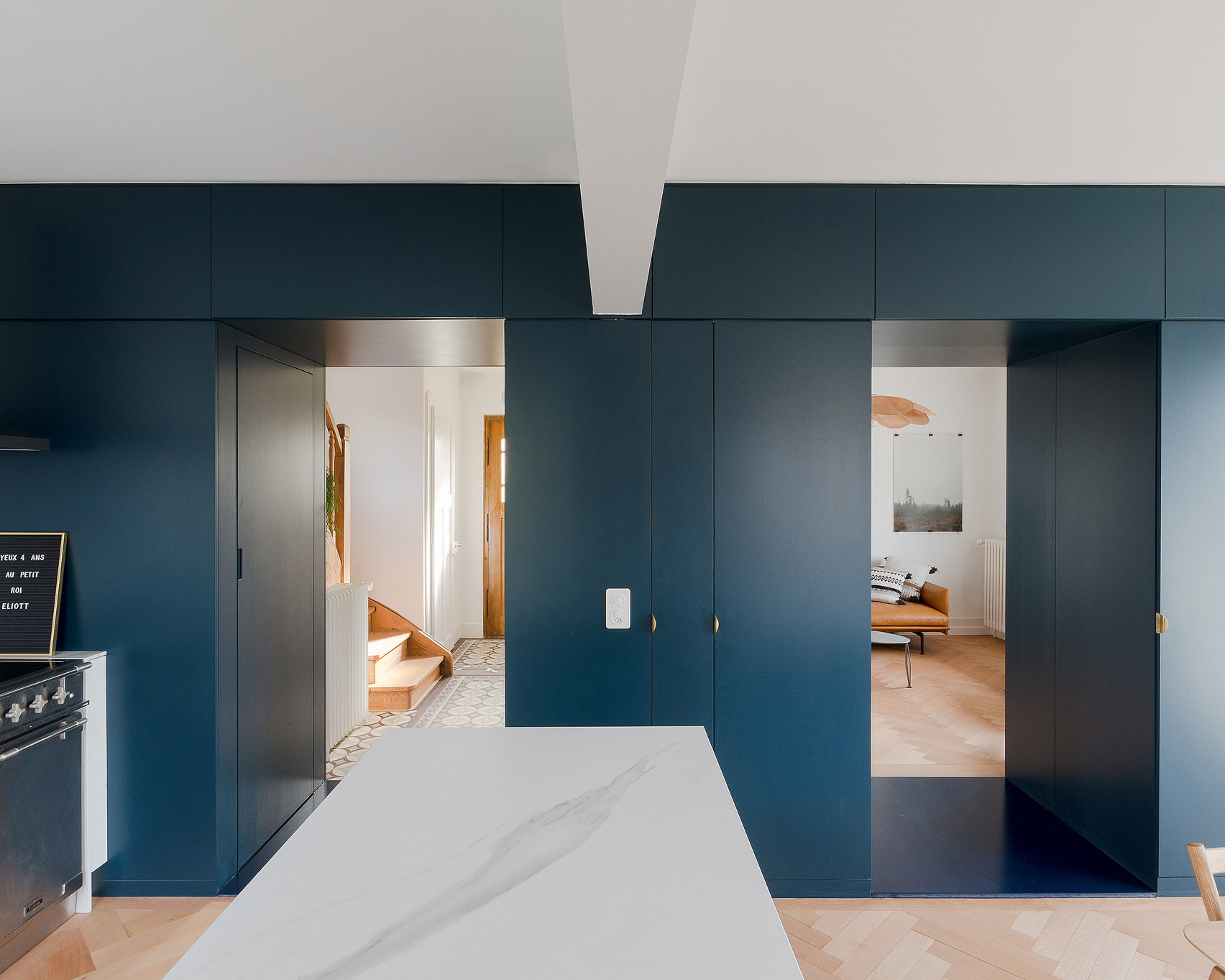 The house was erected during the same decade as Le Corbusier’s Villa Le Lac – a modernist concrete holiday home that the renowned Swiss-French architect created nearby on Lake Geneva for his parents – and similarly boasts an alternative architectural style.

“From the exterior, the house is a hybrid. It is a kind of mix between a chalet with its large roof, its expressive eaves and a rare example of timber-framed construction with a rustic bedrock,” Alan Hasoo, partner at the practice, told Dezeen. “[The owners] had a preliminary experience with other architects, but were not completely satisfied with it – their programmatic brief was therefore pretty clear when we met them,” said Hasoo.

“But they had a more open mind about what was to happen on the ground floor. They asked us to rethink the relation between the existing kitchen, dining room and living room,” he continued. 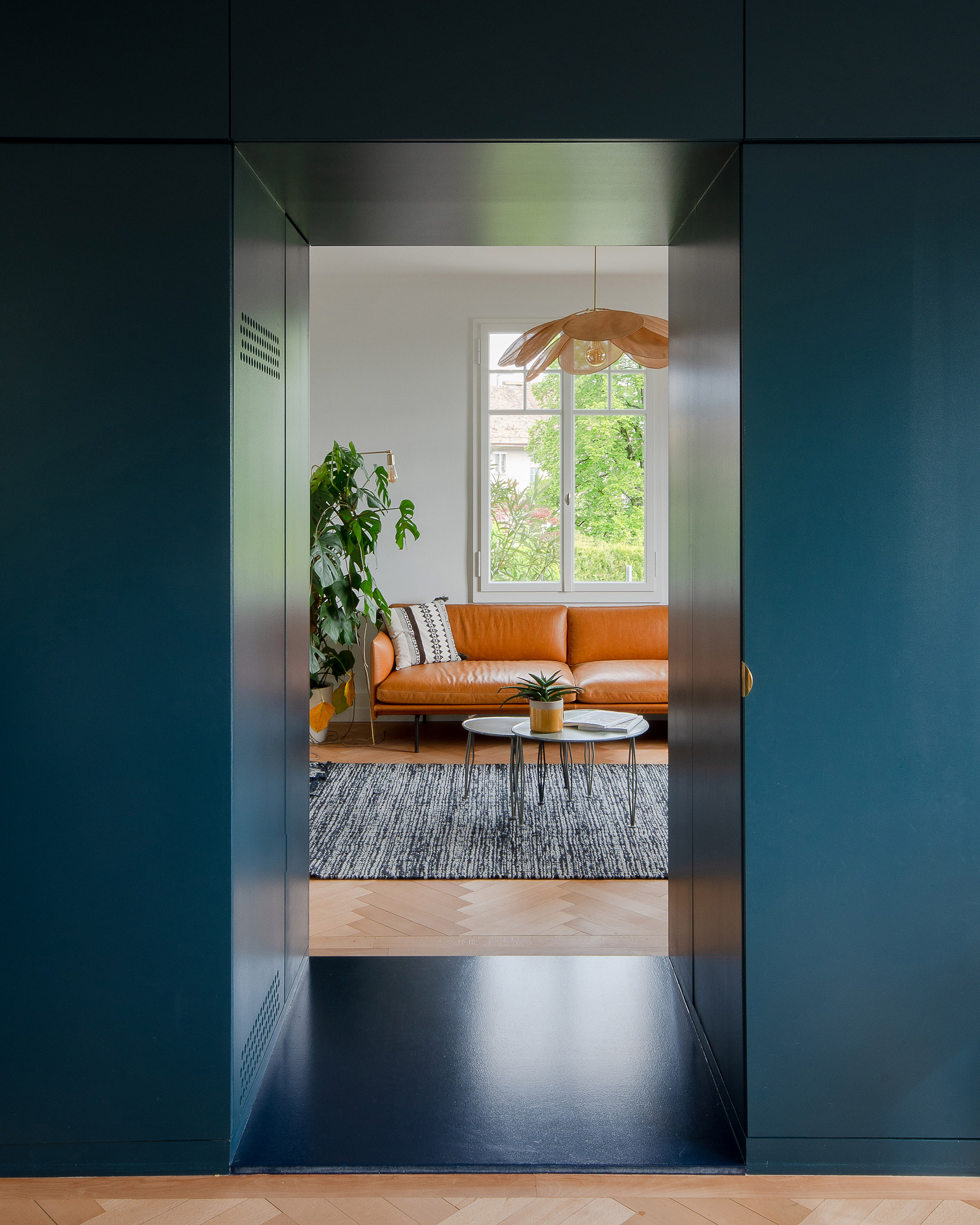 Partition walls have been knocked through on the formerly fragmented ground level to form one largely open-plan living space, divided by a floor-to-ceiling storage unit that extends from one side of the home to the other.

It comprises gold-handled cupboards where inhabitants can stow away their possessions and a series of shelves that can openly display books or ornaments.

It has been painted a deep shade of blue, in a subtle visual reference to the colour of the waters in Lake Geneva. 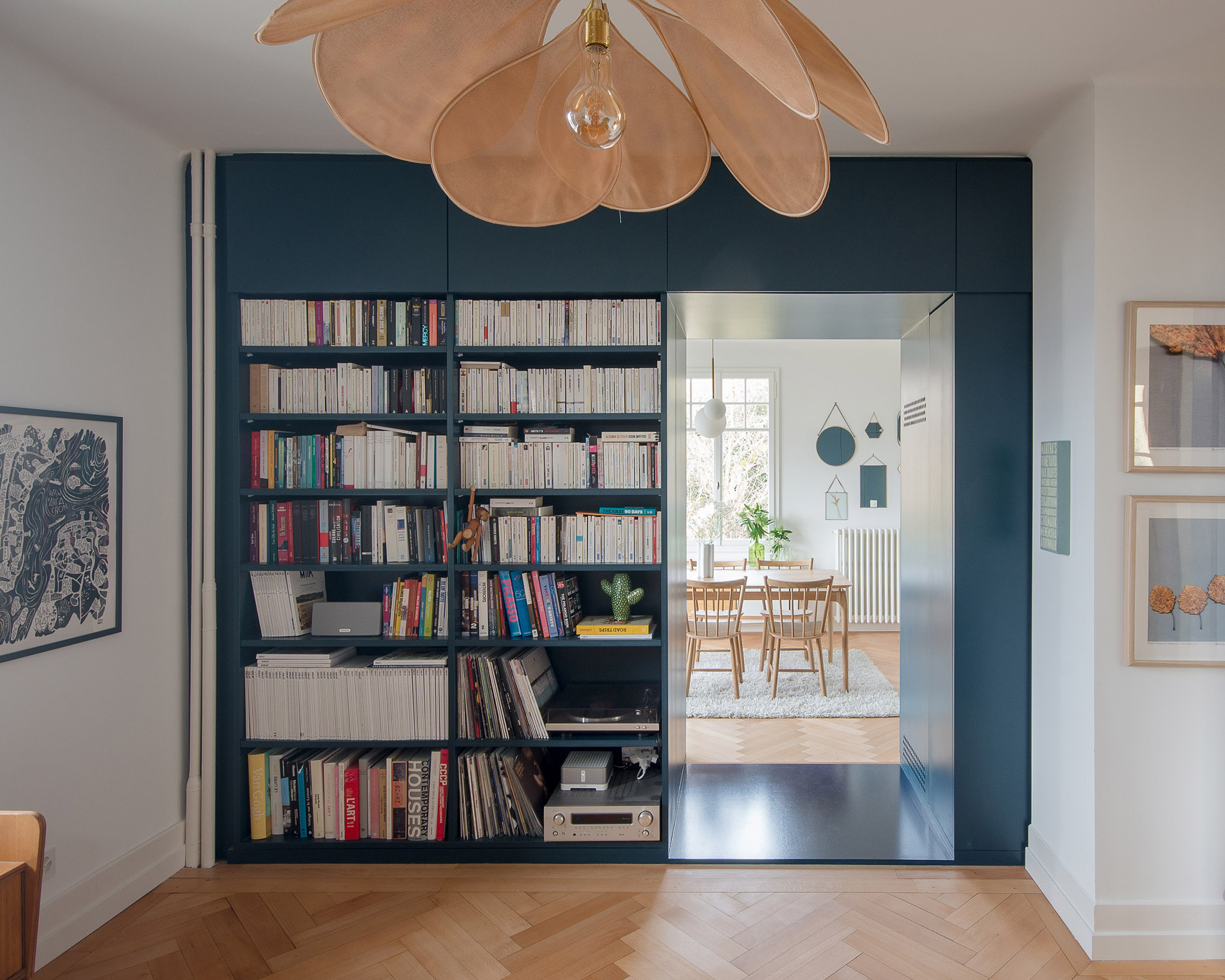 One side of the unit plays host to the kitchen and dining area, which is centred by a long timber table perched on a fluffy rug.

The other side accommodates a sitting room, which is dressed with a tan leather sofa, woven cushions and a couple of potted plants. Other than the new herringbone-pattern wooden floors, other historic fixtures in the home like the door and window frames have been preserved. The entrance hallway also features original patterned tiles.

“No important actions have been implemented on the facade in order to keep its unique expression alive,” added the practice. 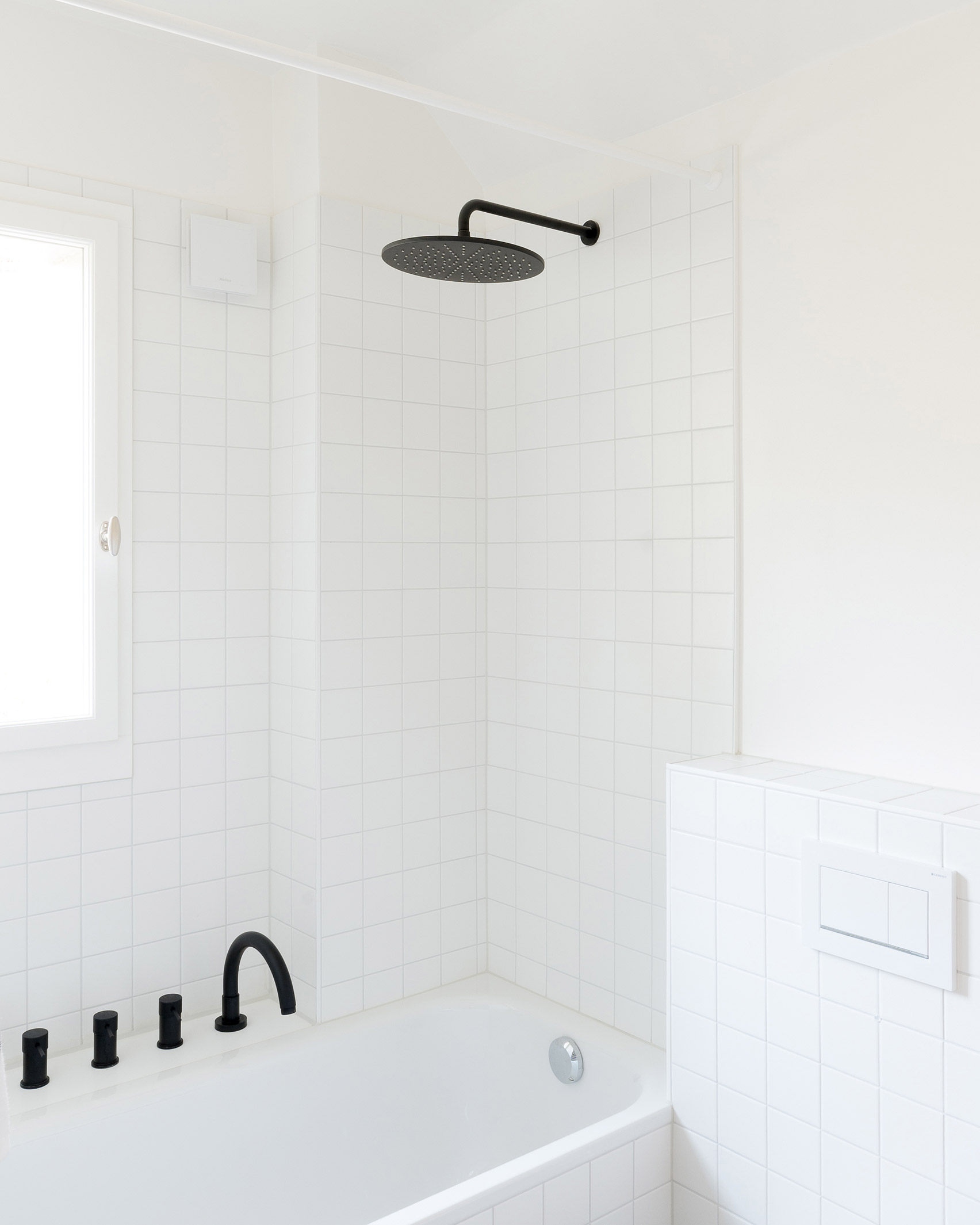 Rooms upstairs on the first floor have also been updated. The bathroom now features grid-like surfaces clad in clean white tiles and a dormer window that looks through to a nearby UNESCO-listed vineyard.

The sink basin is mounted on a blue feature wall that nods to the storage unit downstairs. 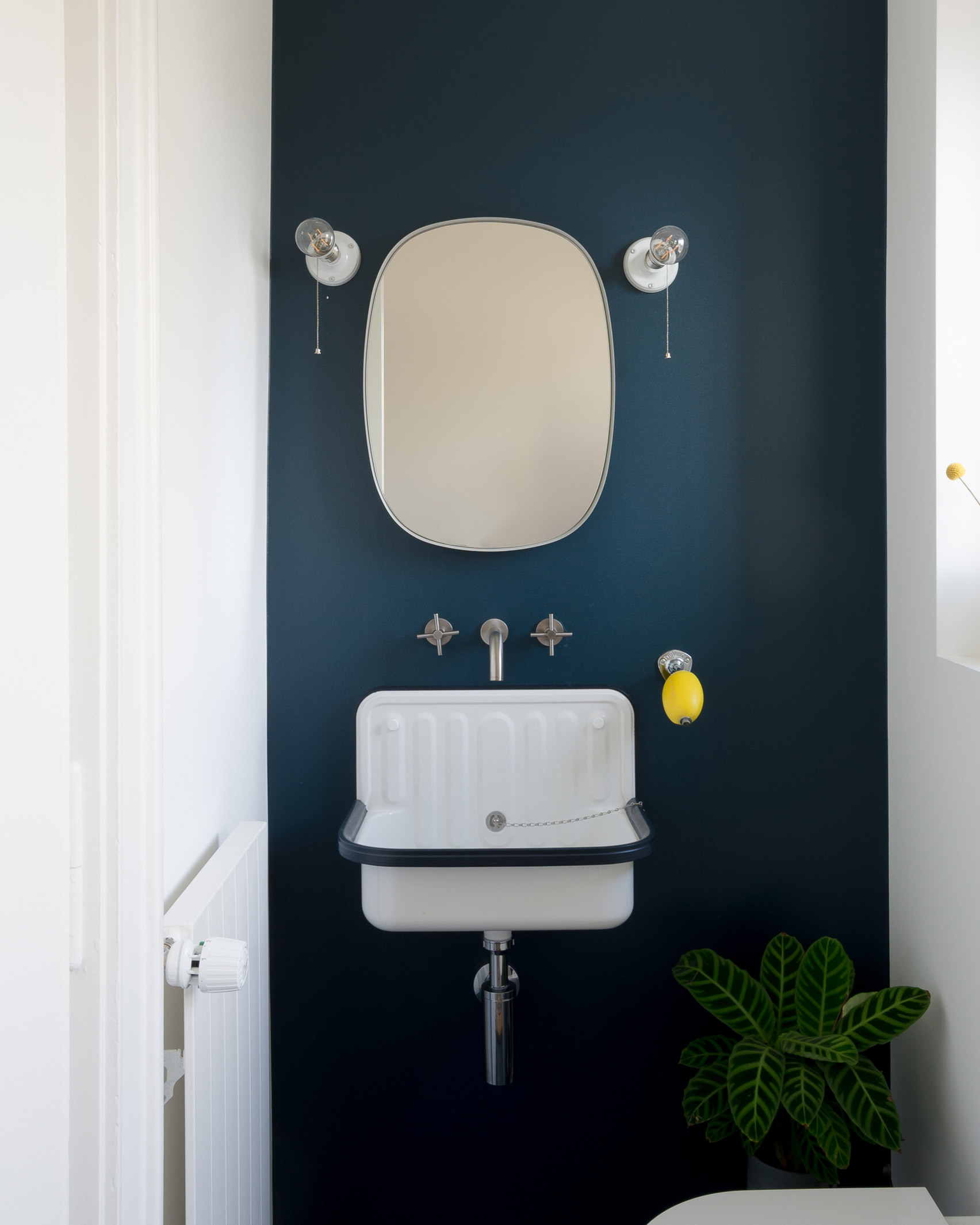 Up in the attic – which was previously just an overflow space – the practice has established a master bedroom. Painted entirely white, the room’s pitched roof frames a window that overlooks the surrounding mountains outdoors. 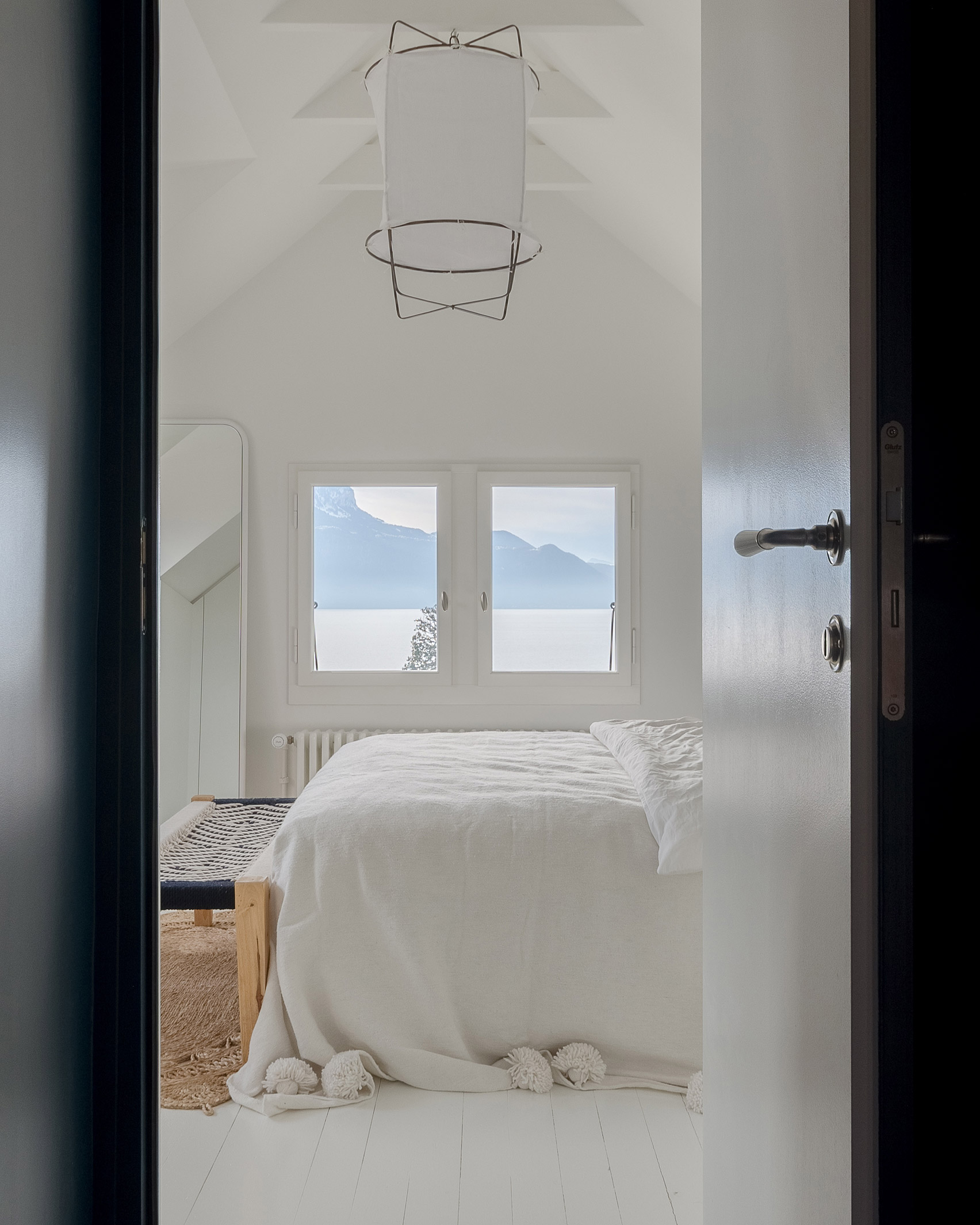 Bureau Brisson Architectes is based in Lausanne and was founded by architect Germain Brisson. Last year the practice overhauled a family home in the Swiss neighbourhood of Chailly, converting it into three rentable apartments.

The flats were completed with standout decor details like green-stained joinery and orange-flecked terrazzo flooring.