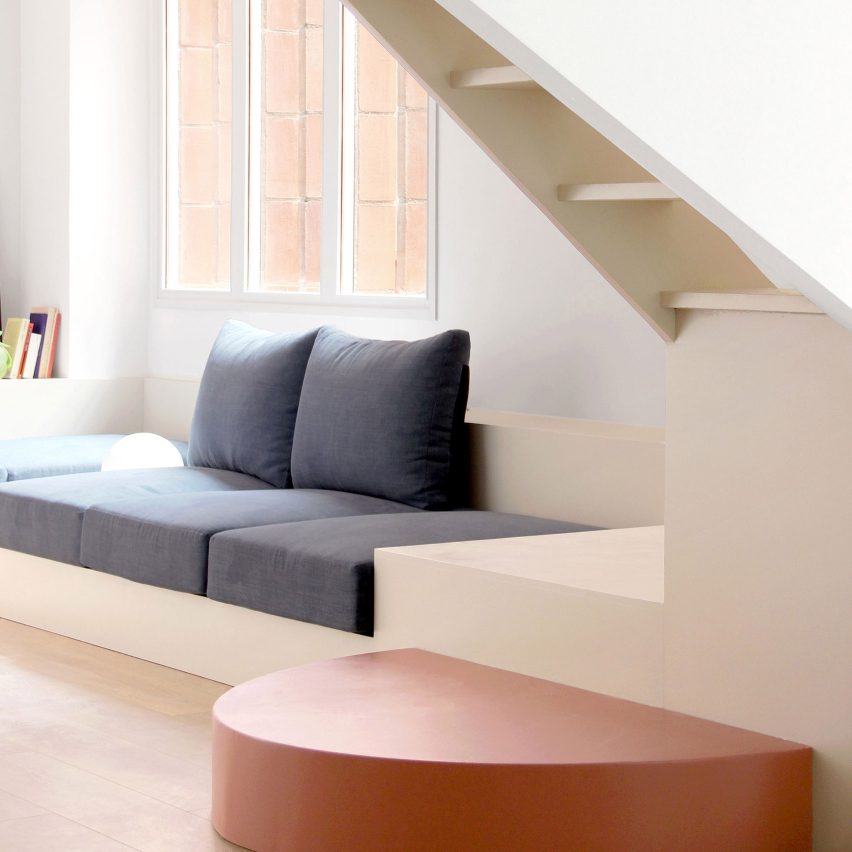 Architecture studio Bonell+Dòriga has revamped an apartment in Ricardo Bofill’s Walden 7 in Barcelona, dotting its interior with colourful geometric elements that reference the building’s facade.

Located just outside of Barcelona in the town of Sant Just Desvern, Walden 7 is a residential block designed by Spanish architect Ricard Bofill.

It was constructed in 1975 and comprises 18 stepped, rust-red towers that are arranged around four teal-blue courtyards. 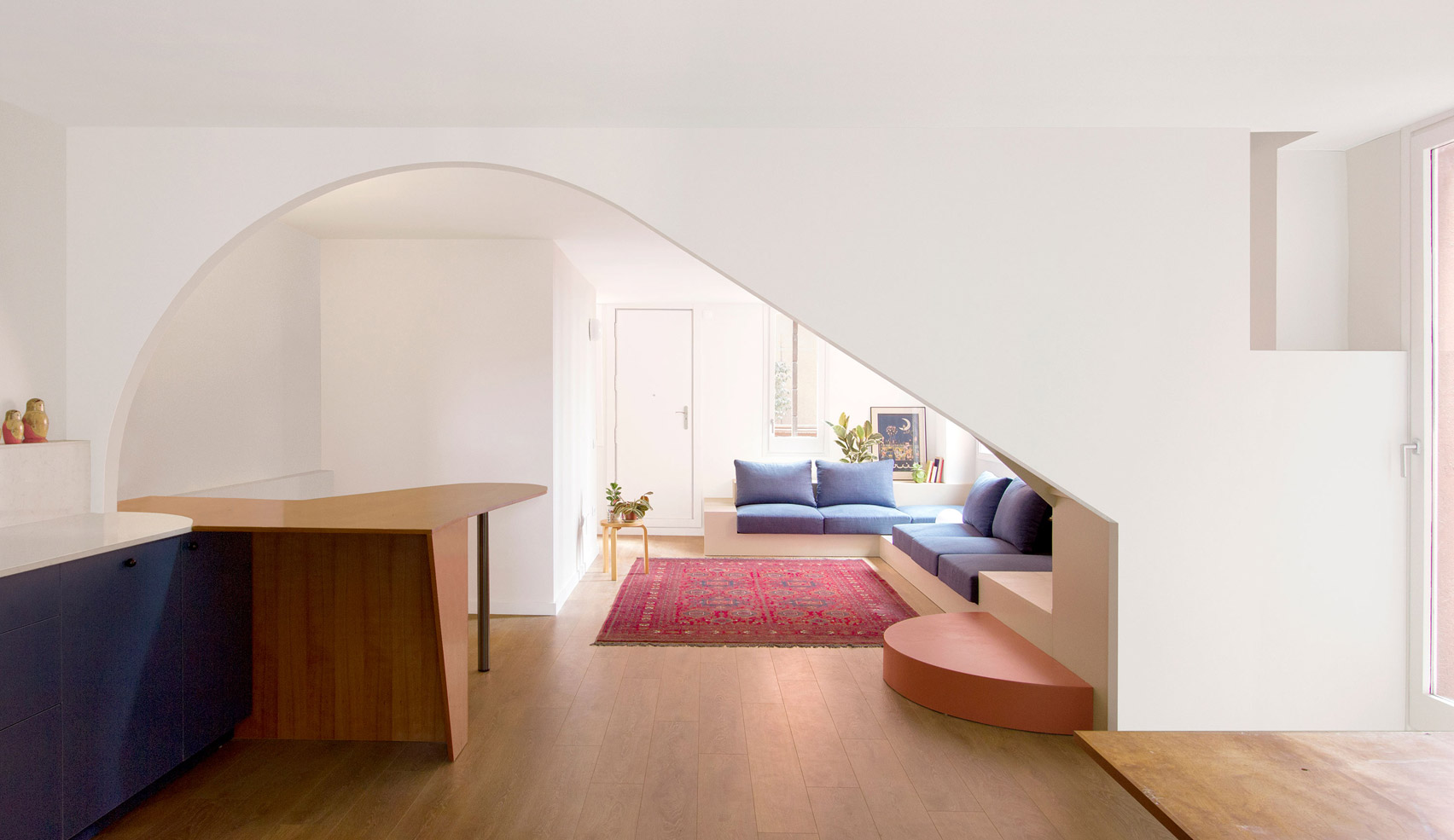 Barcelona-based Bonell+Dòriga was approached to renovate one of the 446 apartments inside the building, which the studio says is enjoying a renaissance.

“It’s a work of architecture which, after decades of oblivion, is currently reviving due to its photogenic presence in social media,” said the studio.

“But the clients are not from the design or marketing world – they know and appreciate the architecture of the building because they are from the city, but are always kind of surprised and amused when they run into people taking pictures and changing clothes in the middle of the public corridors,” it told Dezeen.

“We never talked about terms such as ‘Instagrammable’ architecture.” 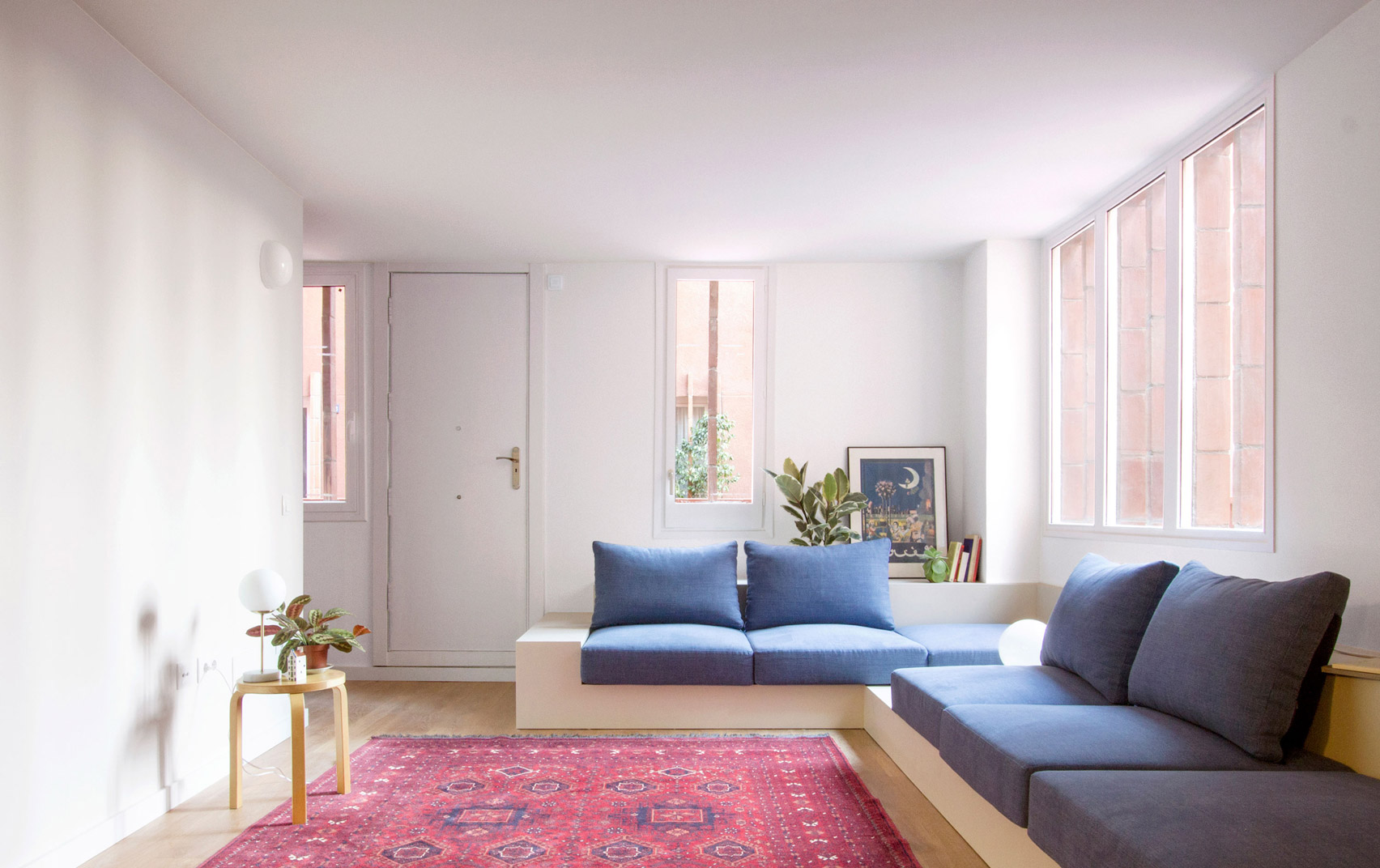 The apartment – which takes over part of the building’s 12th and 13th floors – has a simple interior scheme that features quiet pops of colour.

Most partitions have been knocked through on the lower level to form a singular, open-plan living space. 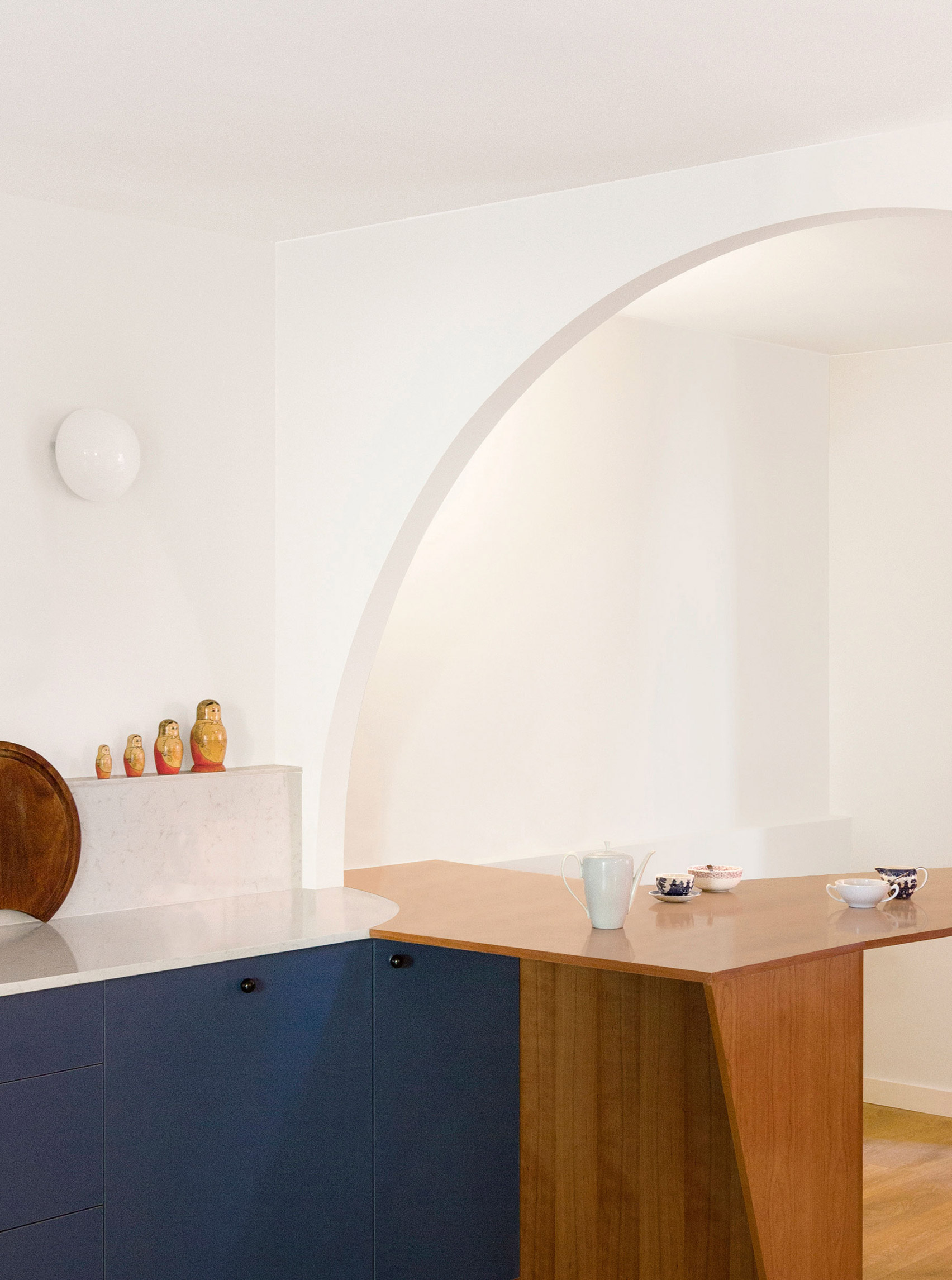 Chunky, sand-coloured plinths have been set in the corner of the room to create an L-shaped sofa. It’s topped with plush blue cushions, their colour intended as a subtle nod to Walden 7’s courtyards.

Blue cabinetry has also been installed in the kitchen. 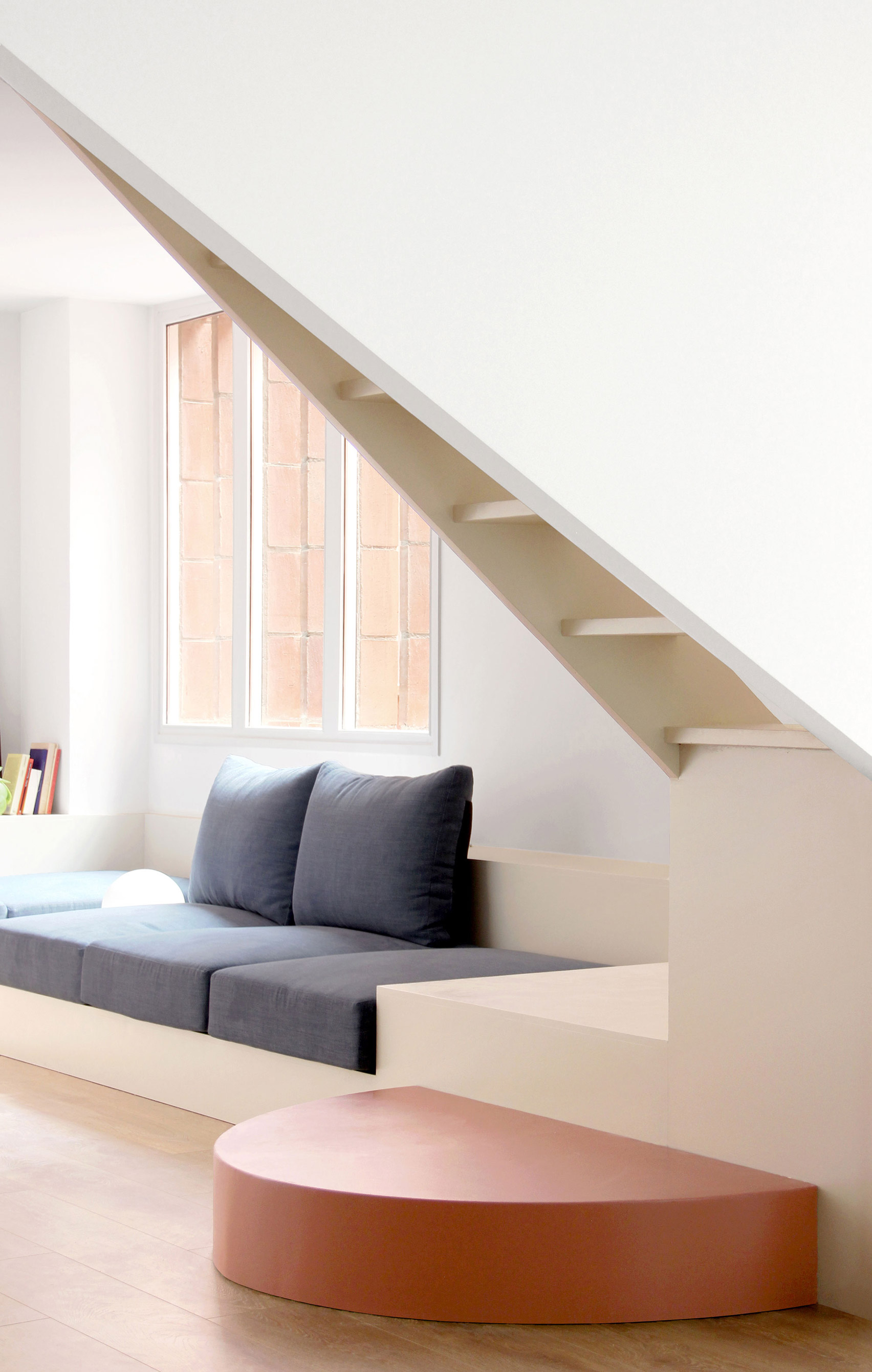 “Located in the central part of the complex, [the apartment’s] belonging to the building is practically inescapable, even in its interior,” the studio explained.

“In this context, it was essential that our intervention established a connection with the rich fabric of Bofill’s architecture, but without trying to mimic it.” 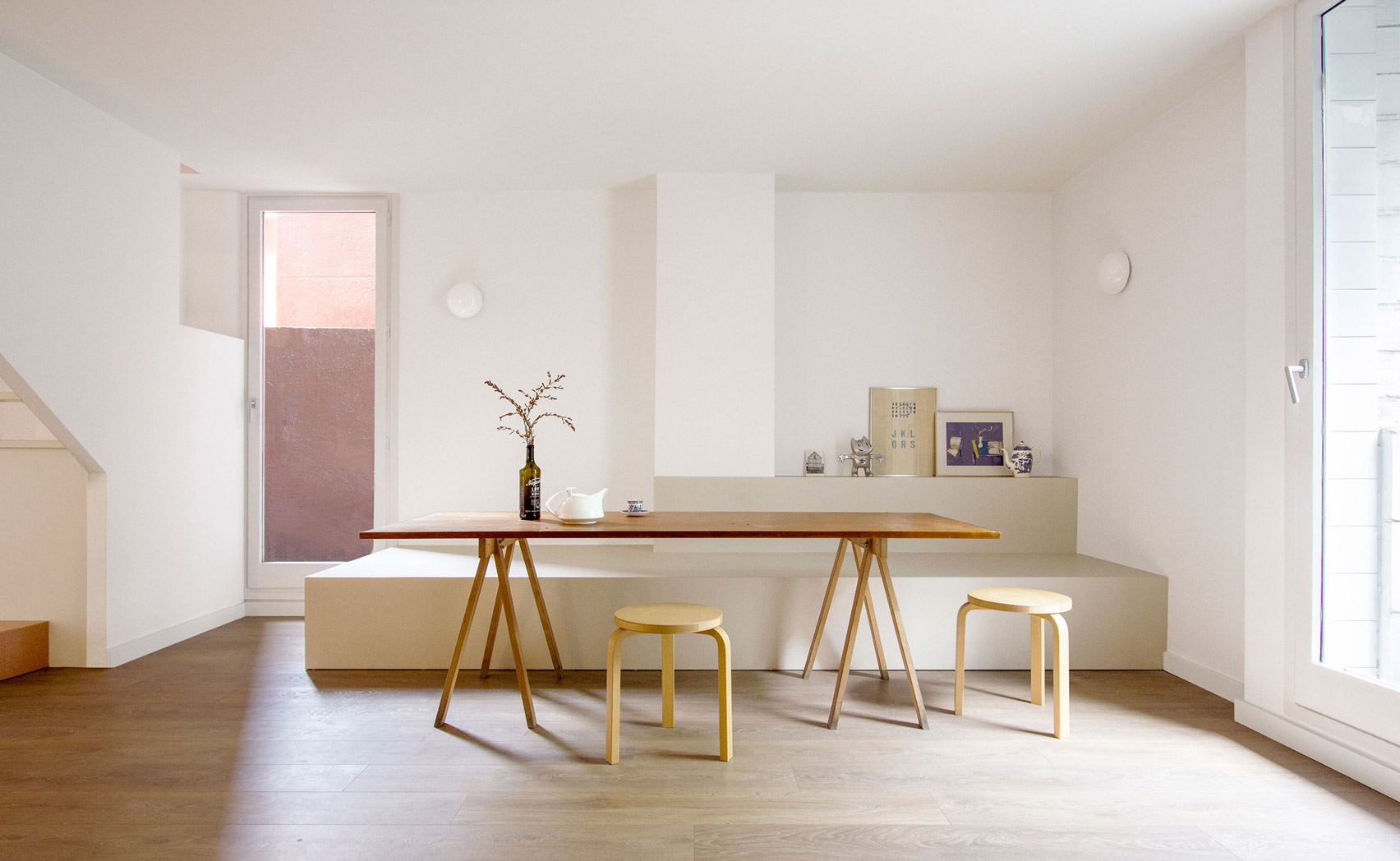 A white-painted wall with a huge geometric cut-out looks through to the opposite side of the room, which accommodates the dining area.

Plinths appear again here, this time serving as a bench seat and display shelving for the inhabitants’ personal ornaments and artworks. 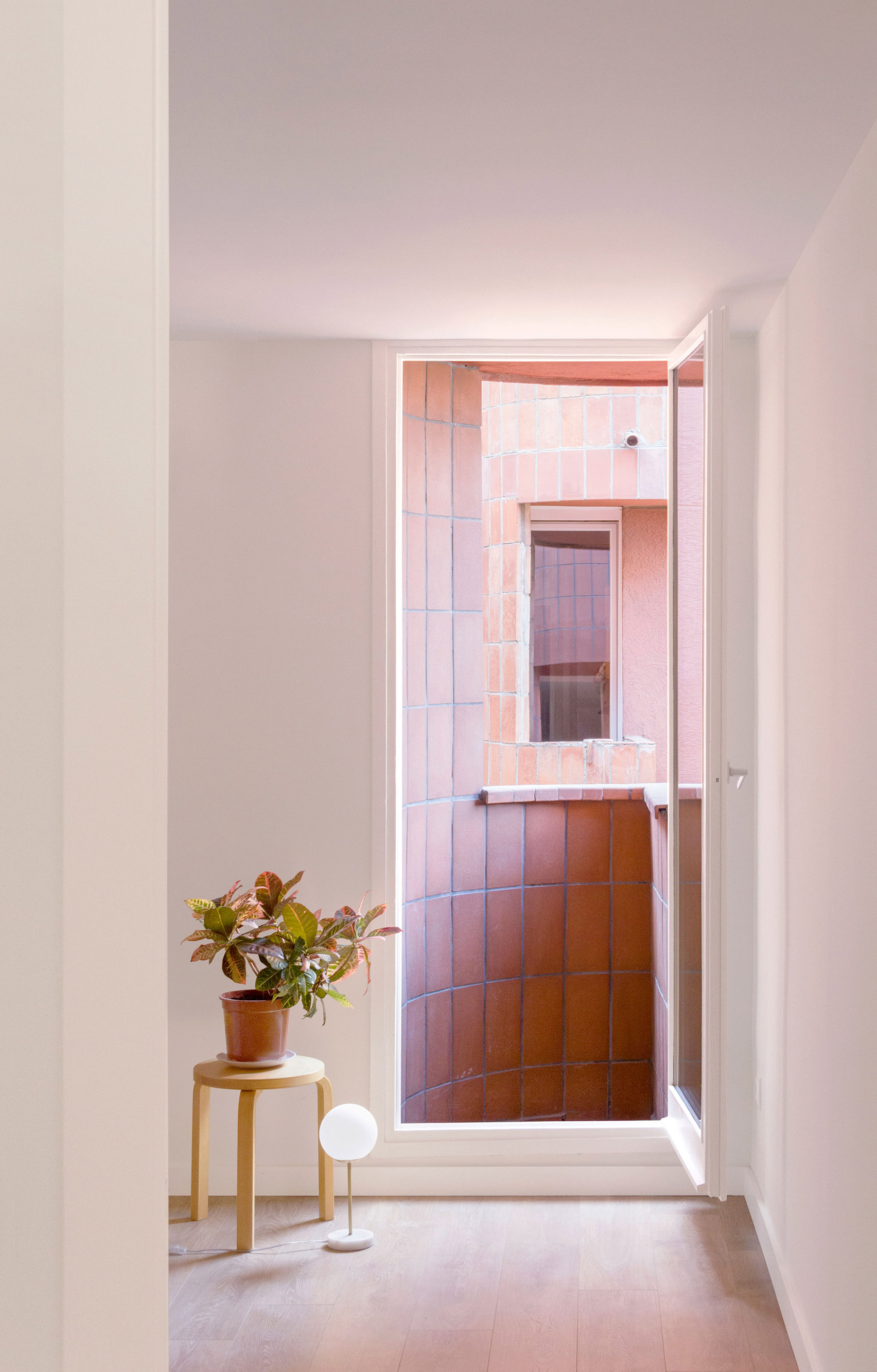 The apartment’s sleeping quarters are reached via a short flight of stairs.

A semi-circular block forms the first step, coloured rust-red to match Walden 7’s facade. Its shape also alludes to the curved balconies that appear throughout the residential block.

Beige tiles have then been applied in a step-like formation across surfaces in the bathroom, emulating the building’s form. 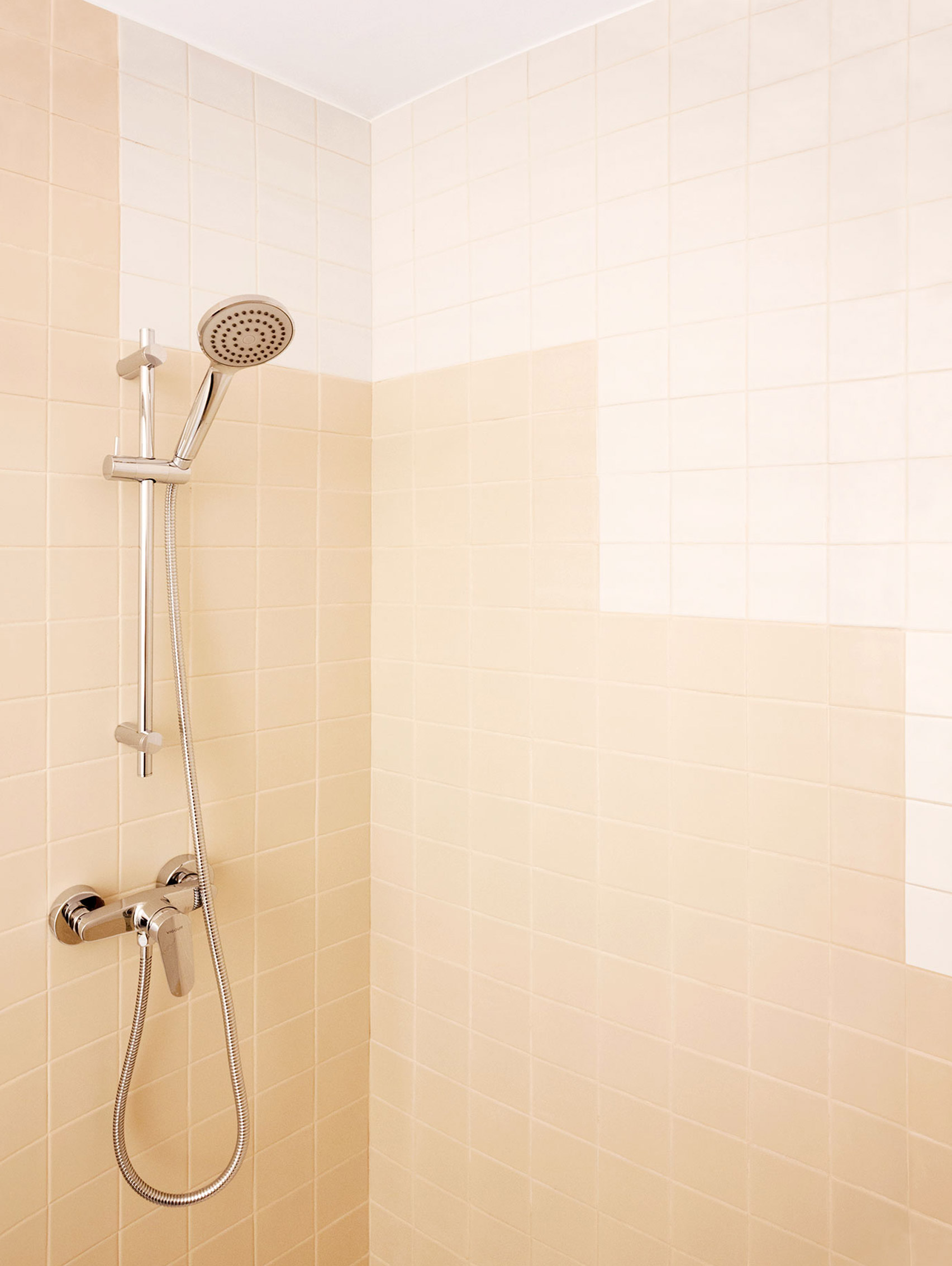 Bonell+Dòriga is based in Barcelona and headed up by duo Laura Bonell and Daniel López-Dòriga.

The studio joins several people in the architecture and design community who continue to be drawn to Ricardo Bofill’s canon of work – just last year Hungarian photographer Márton Mogyorósy employed a drone to capture aerial shots of Walden 7, showing off the building’s symmetry and Bofill’s “utopian vision”.

Photography is courtesy of the studio.