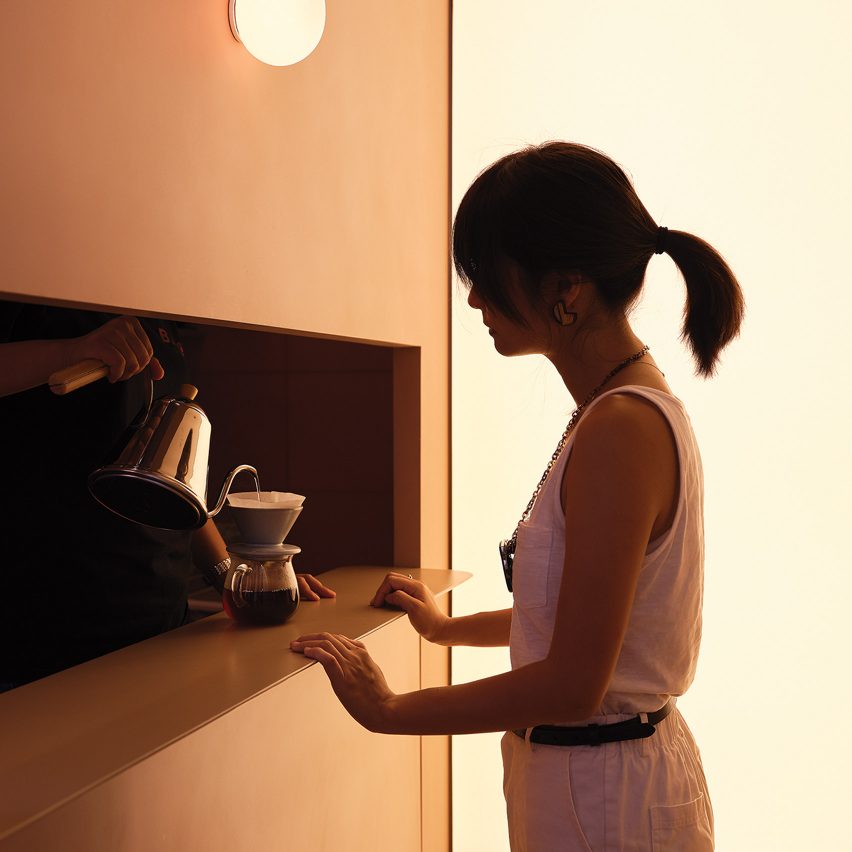 Set within a co-working space in Beijing’s Xian Yu Kou neighbourhood, Basic Coffee has been designed by locally-based Office AIO to spotlight the “orchestrated movements” of drinking coffee. 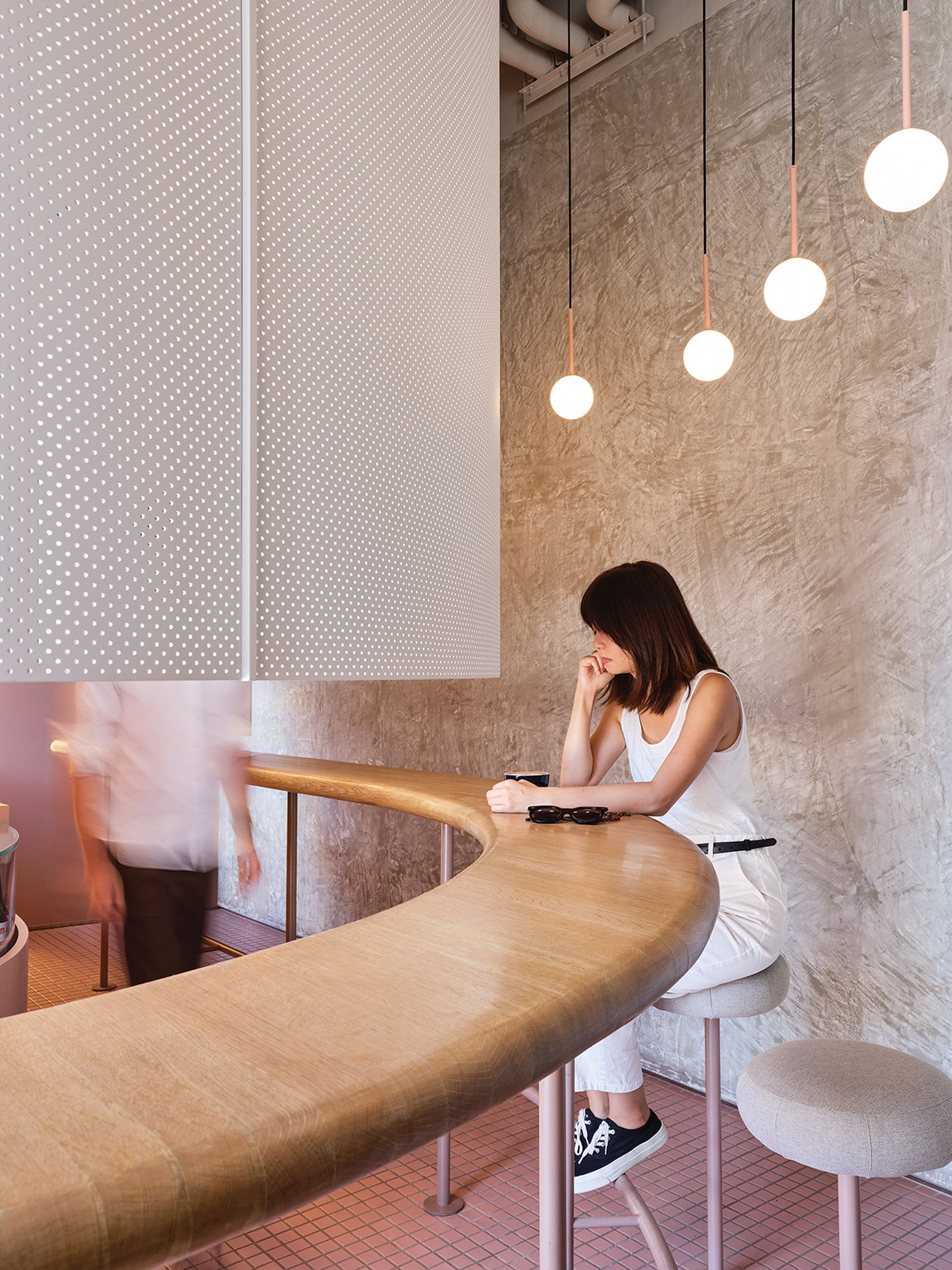 “Like a live advertisement, these framed views expose different motions performed by all parties in the cafe,” explained the studio.

“The suggestiveness in partially concealed acts of indulging in coffee, muffled chatters, and sound and smells of coffee-making, arouse one’s curiosity and appetite.” 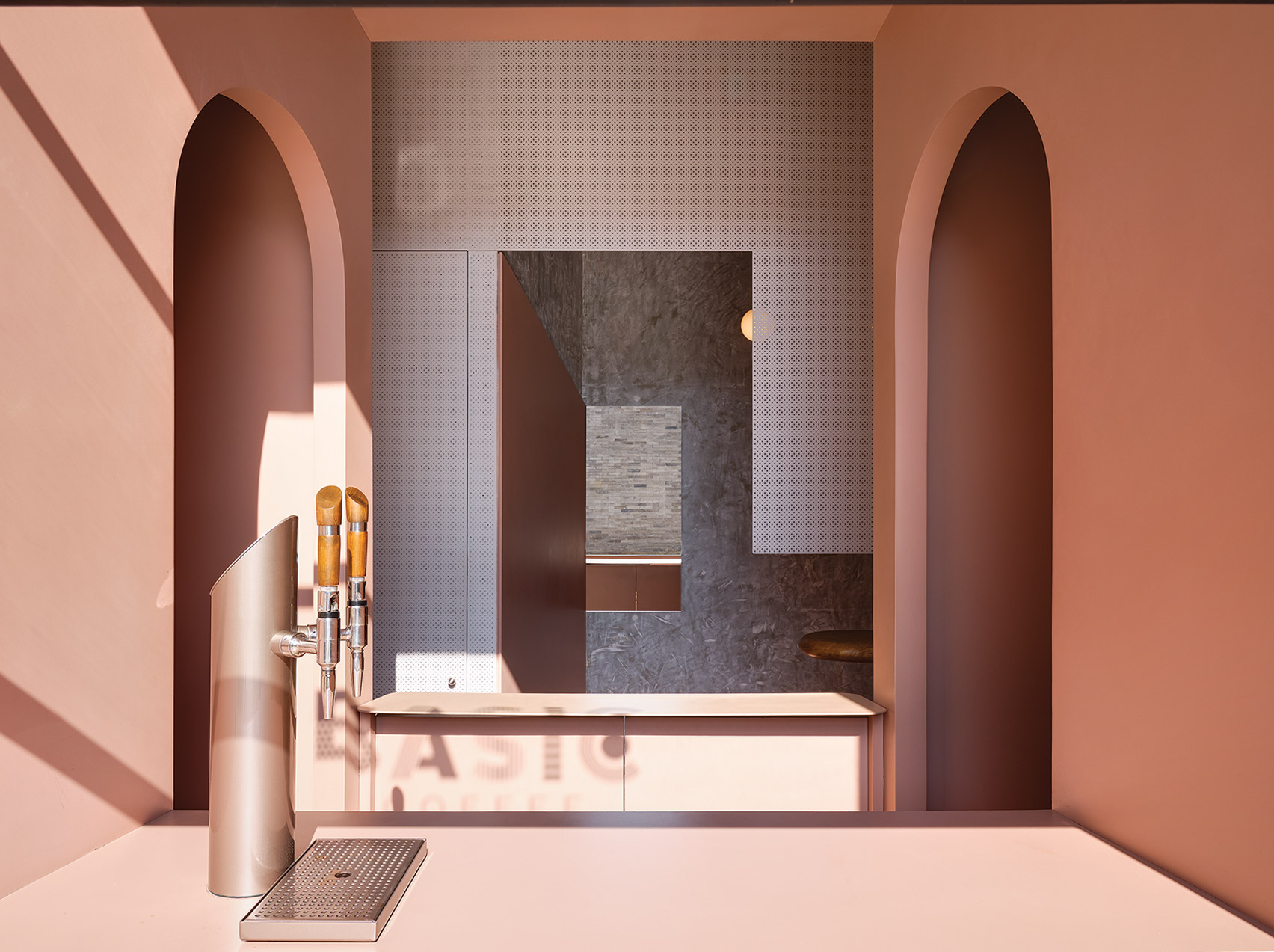 The 30 square-metre cafe has thus been arranged to boast a concentric floor plan – at its heart is a curved, blush-pink volume where baristas prepare coffee orders.

Sheets of perforated aluminium have then been suspended from the ceiling to wrap around the volume, forming a short corridor through which customers walk to collect their drinks. 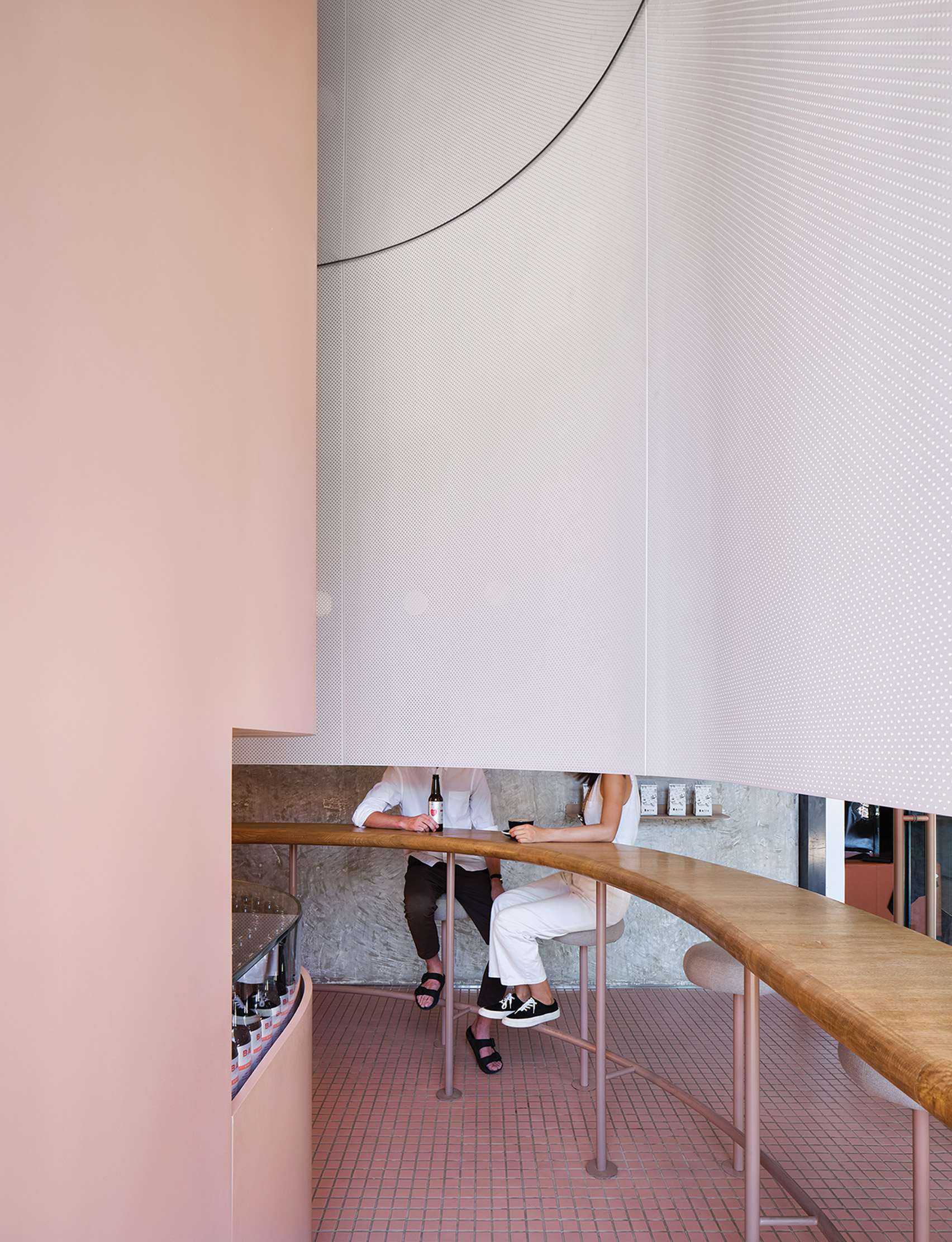 The white metal sheets also partially screen customers sat at a wooden counter that sweeps around the outermost part of the floor plan. 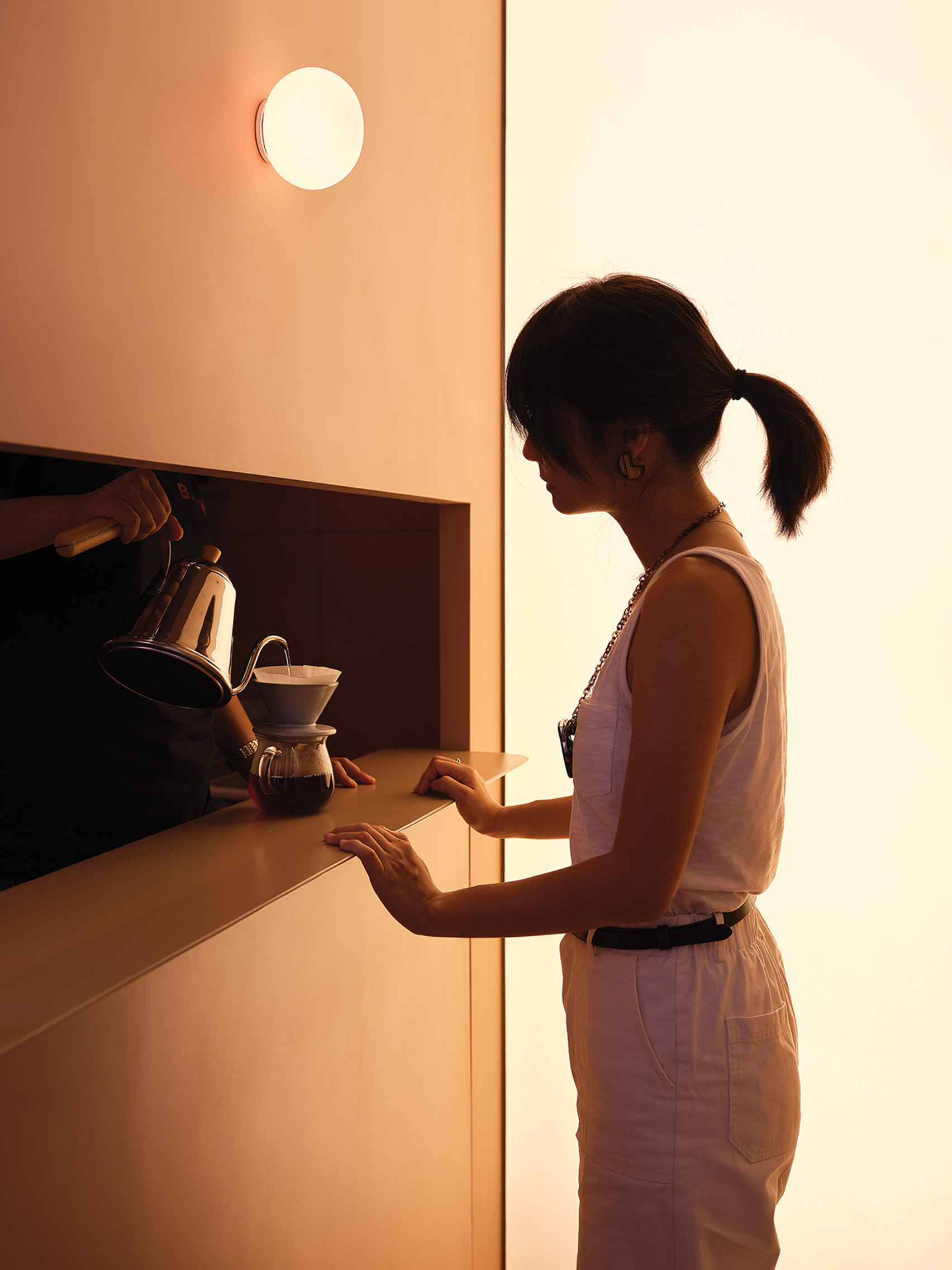 While most of the cafe’s surfaces have been roughly hewn with grey plaster, one wall has been entirely backlit – it casts a dramatic glow over a small opening in the central volume where pour-over coffee is served.

An expansive window punctuated in the building’s brick facade also provides an “exaggerated” view of Basic Coffee’s staff at work. 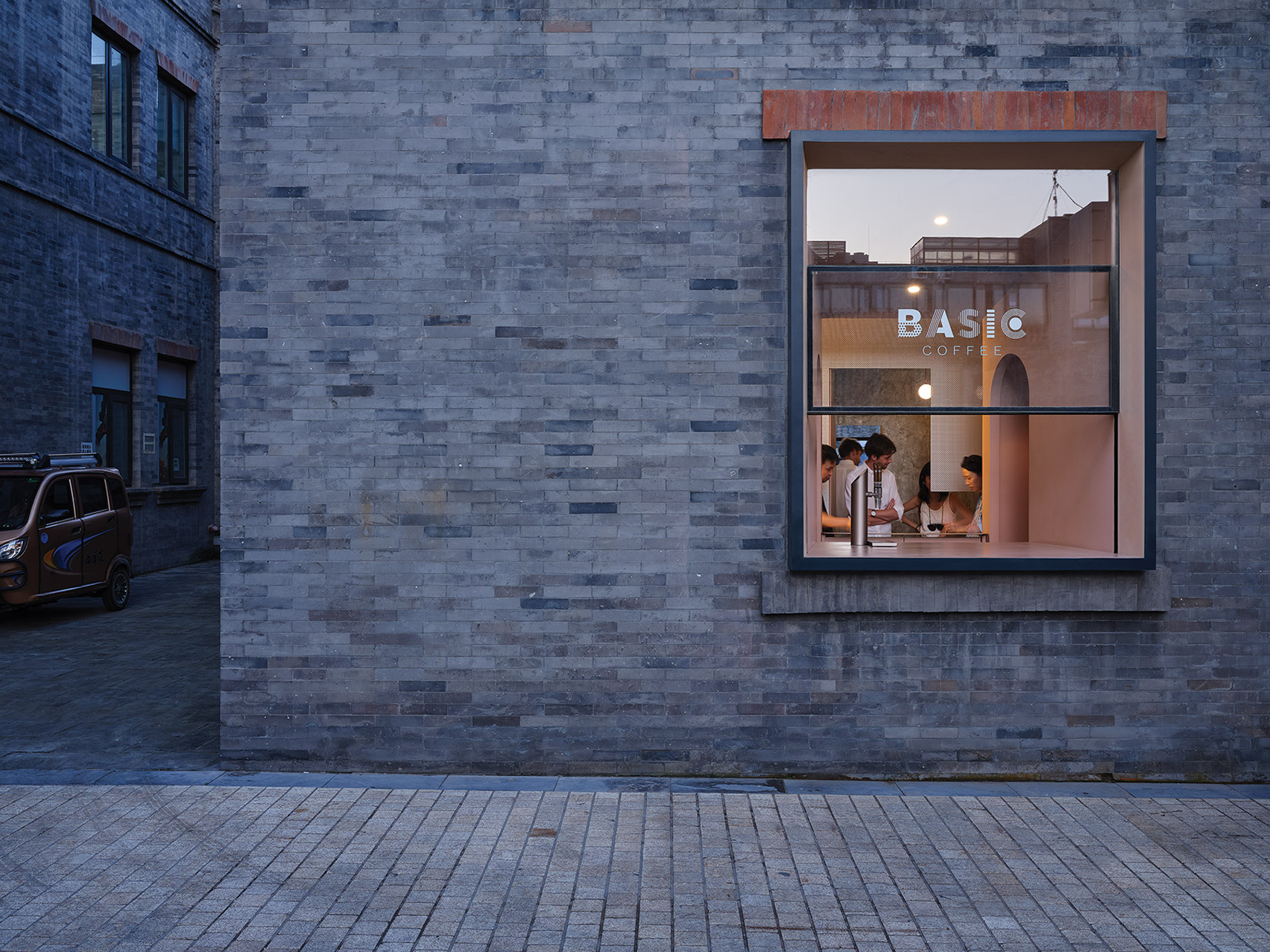 Office AIO was established in 2014 and is headed up by Tim Kwan and Isabelle Sun. This isn’t the first coffee bar that the studio has completed – back in 2016 it set up Big Small Coffee inside a former hutong home in Beijing, lining its surfaces with cork and white tiles.

The studio’s Bar Lotus project was also recently named as the winner of the restaurants and bar interior category of the 2019 Dezeen Awards.

The space – which serves as a cafe by day and cocktail bar by night – boasts emerald green walls and a ripple-effect ceiling made from rose-gold sheets of stainless steel.

The post Basic Coffee in Beijing is designed to be “like a live advertisement” appeared first on Dezeen.