Atmos Studio has completed a flowing staircase made from laminated oak that is the centrepiece of a recently opened restaurant in Mayfair, London.

StairStalk is the centrepiece of the Oliver Dabbous’s recently opened HIDE restaurant, where it ascends from a basement bar to the dining areas on the ground floor and upper mezzanine. 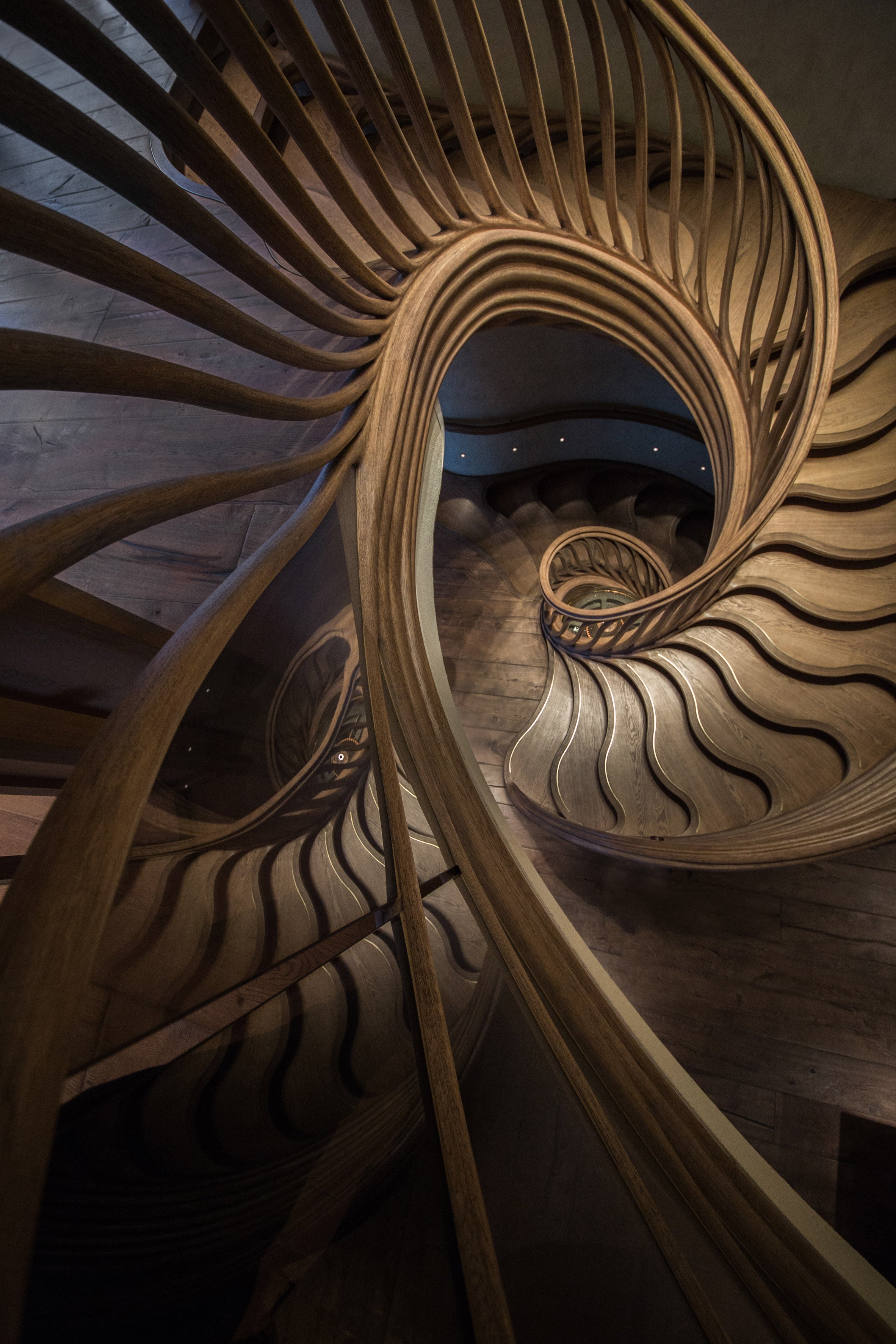 The multidisciplinary practice is known for its organically inspired designs and was chosen to create a statement staircase that appears to grow out of the shadows of the basement level towards the daylight above.

The overall concept for the restaurant’s interior was already developed by interior designer Rose Murray, director of These White Walls, before Atmos Studio was brought on board to create the showpiece staircase. The restaurant was realised by architectural consultancy Lusted Green. 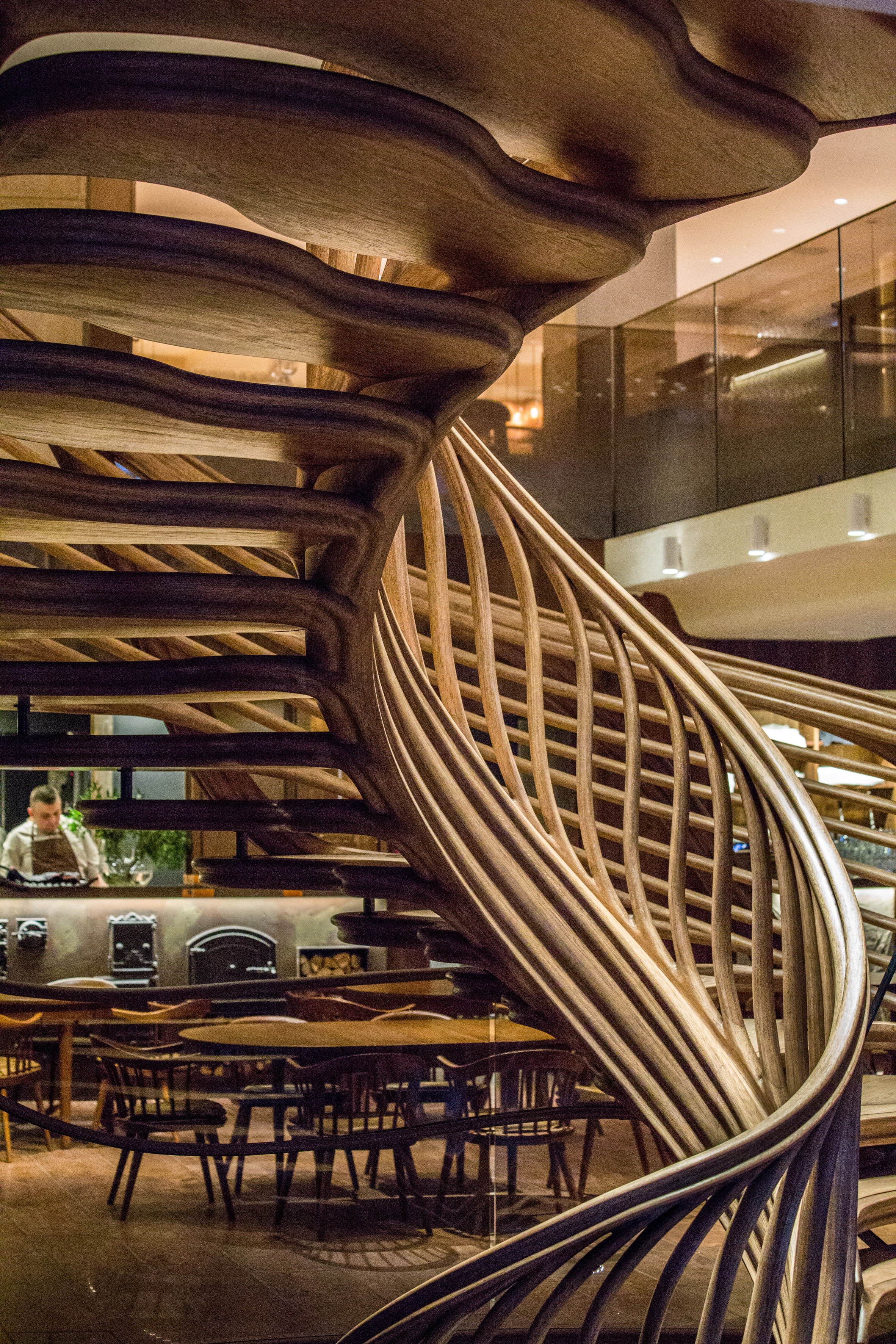 Murray’s scheme focused on a theme of “dwelling” and a re-imagining of familiar elements. This was the starting point for the design of the staircase, which was developed to grow from and interact with the existing spaces.

The base of the stair features tendril-like lines that appear to flow out from niches in the wall, junctions between the wall and floor, bar footrails and even the surface of the basement bar. 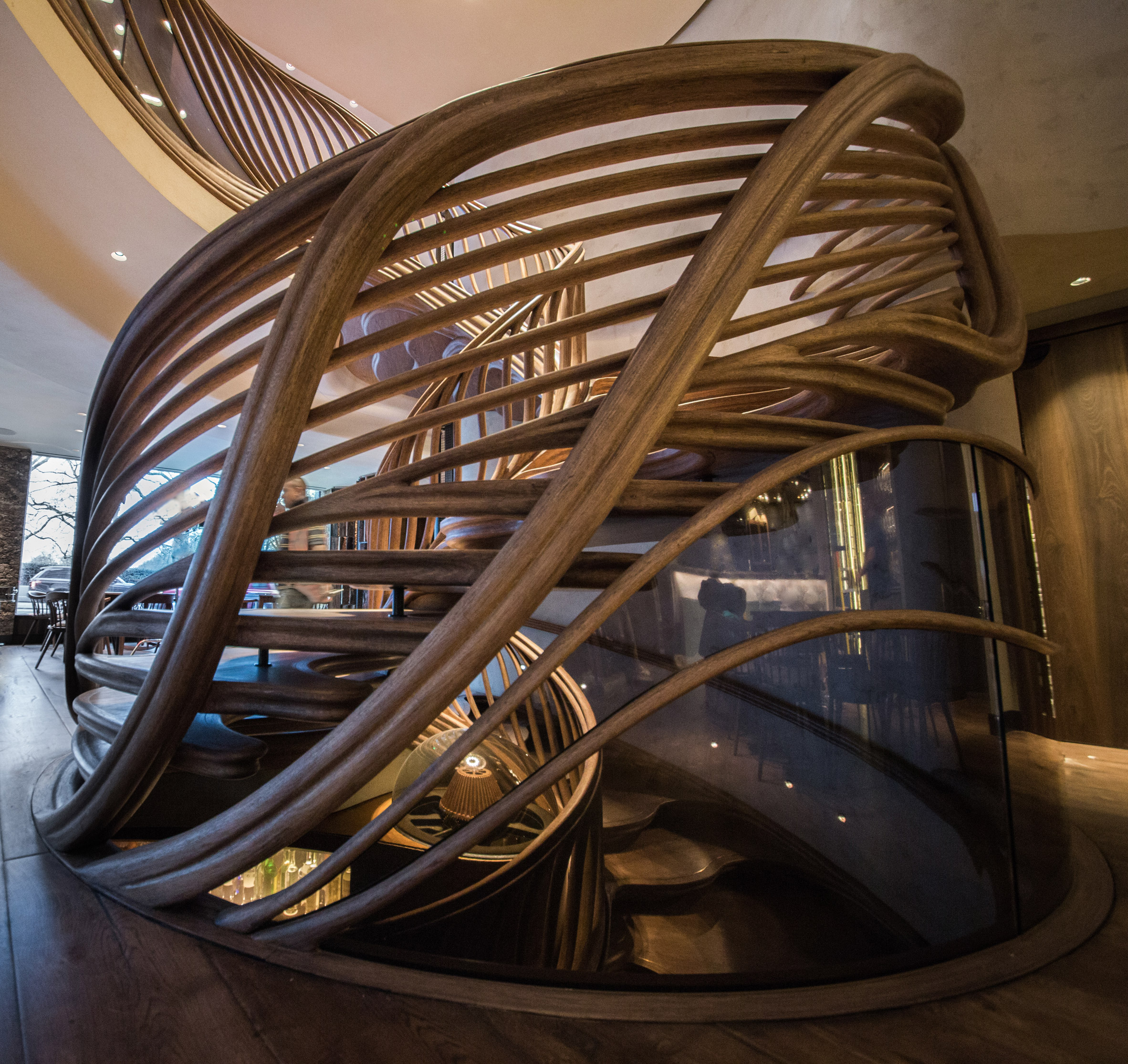 The various lines converge at the lowest point of the staircase, forming a handrail and a stringer that extends upwards gradually before flattening out into a half landing. The stair then continues smoothly to the upper mezzanine.

“The entire stair curls and cantilevers out from a sculptural helical inner stringer – a carefully carved and highly articulated bundle of nature-like fibres which continuously curve and wind upwards through the void, their strands individually unfurling into each upper branch and inner tread,” claimed Atmos Studio.

The staircase is built around a concealed steel and plywood core that was required to enable it to float freely away from the walls. Additional support for the cantilevered treads is provided by steel plates embedded in the wood.

Polish fabricator Trabczynski and GD Staircases were tasked with managing the complex construction. It was created using a specialised method of bentwood construction, which involves laminating hundreds of layers of veneer to make contoured forms that retain the illusion of solid wood. 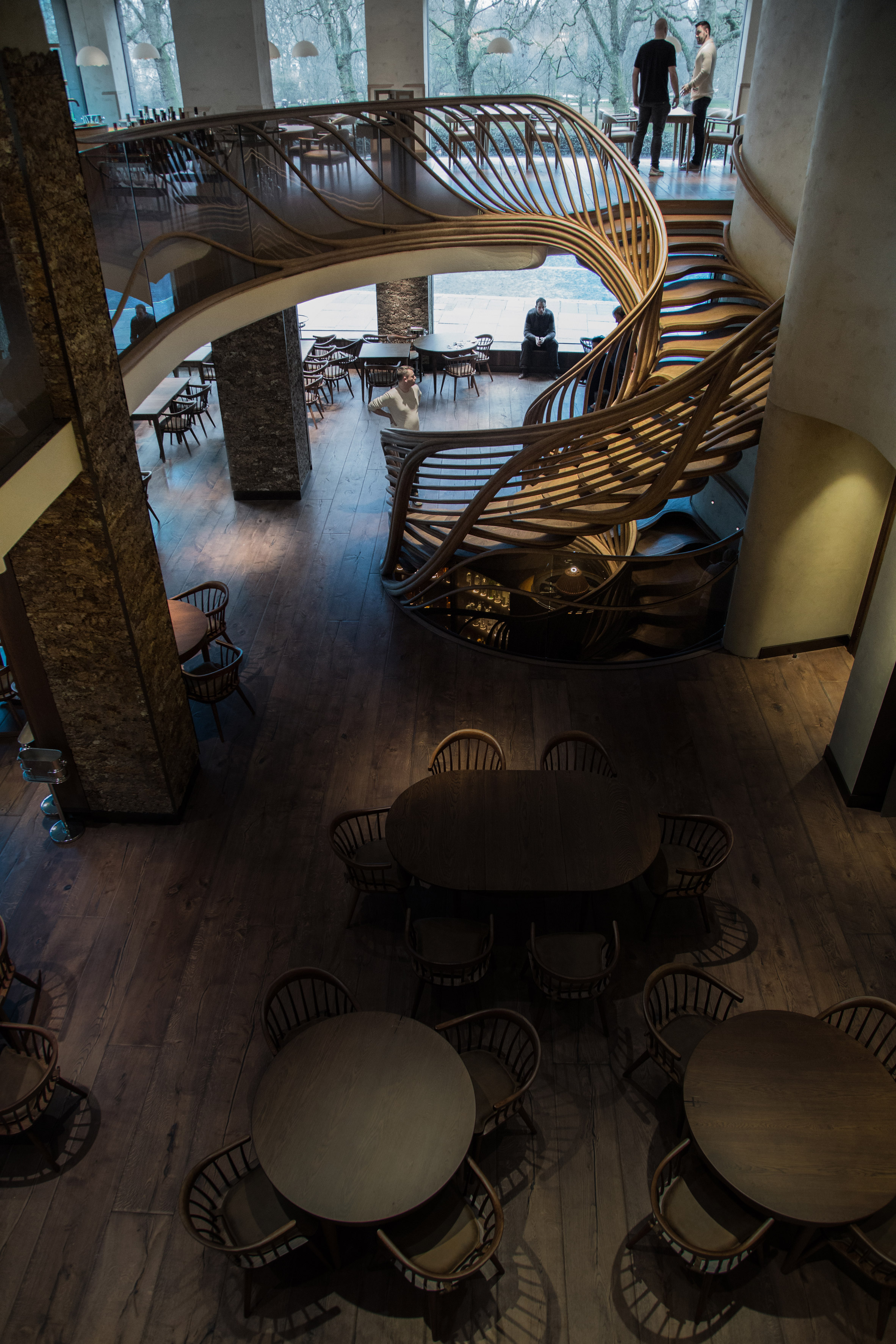 The staircase’s timber treads feature scalloped profiles that flow out from the stringer and balustrade like leaves from a stalk.

“It twists upwards, spiralling energetically like a corkscrew, steps unfurling seamlessly from the structural stem like leaves, while further branches similarly delaminate to form a delicate wavy balustrade guiding the guests carefully upwards,” the studio added. 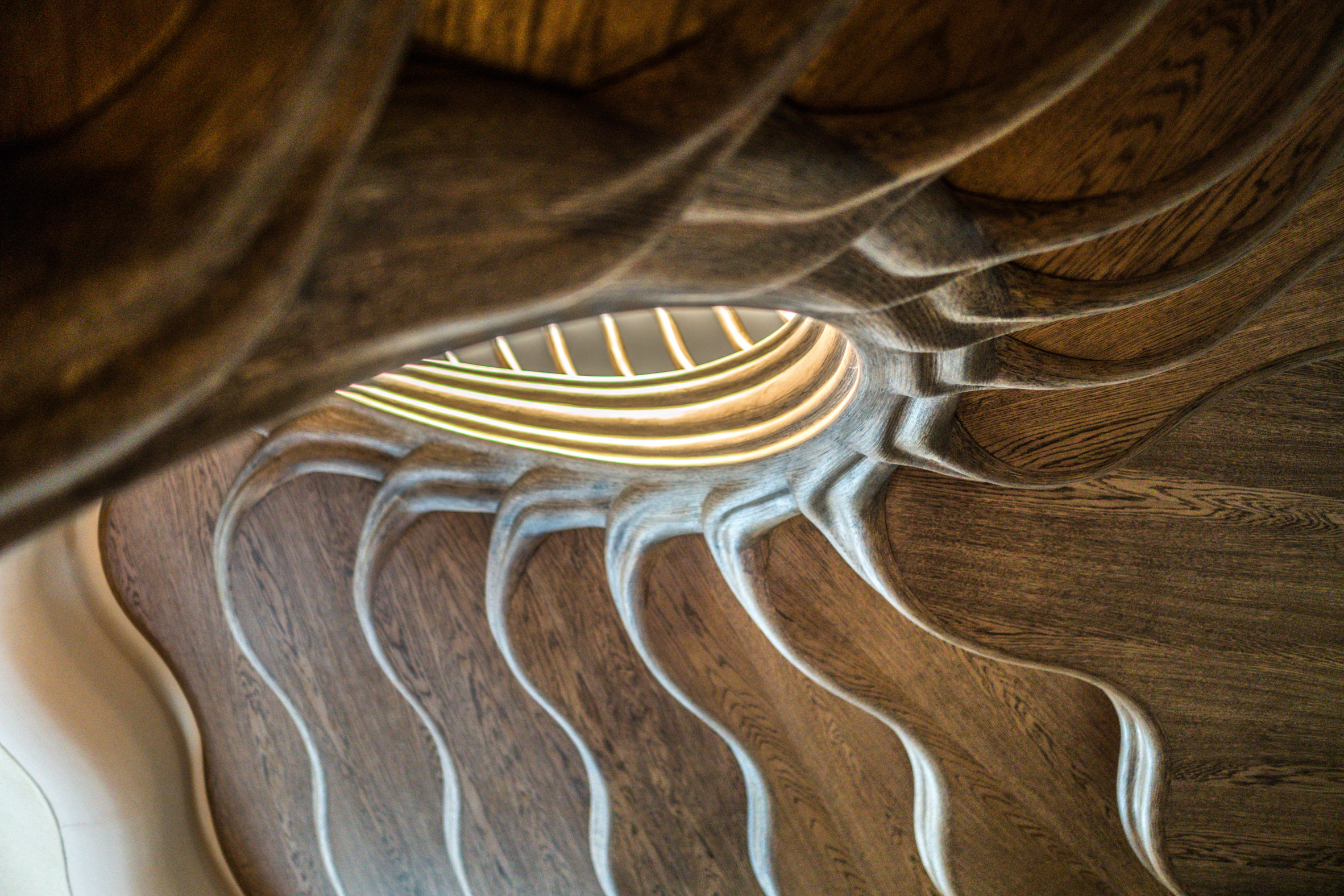 The lowest step has a slightly concave form that gradually inverts and forms an increasingly protruding curve. This lip is intended to denote a speedier central ridge that offers a quicker route than the narrower edges.

As the structure ascends from basement to the mezzanine, each tread lightens slightly to reflect the different tonal properties applied to the interiors of the three interior spaces.

Photography is by Alex Haw.