Beijing practice Atelier Tao+C has inserted a narrow light shaft into the centre of this 1930s home in Shanghai to illuminate its light-starved rooms.

The property is one of a number of dwellings set along alleys in the city’s former French Concession. They alley houses known as lilongs, or lane houses, were popular in Shanghai during the early 20th century but only a few remain today.

Governed by the French between 1849 and 1943, the area is now a popular tourist destination boasting several shops and cafes. 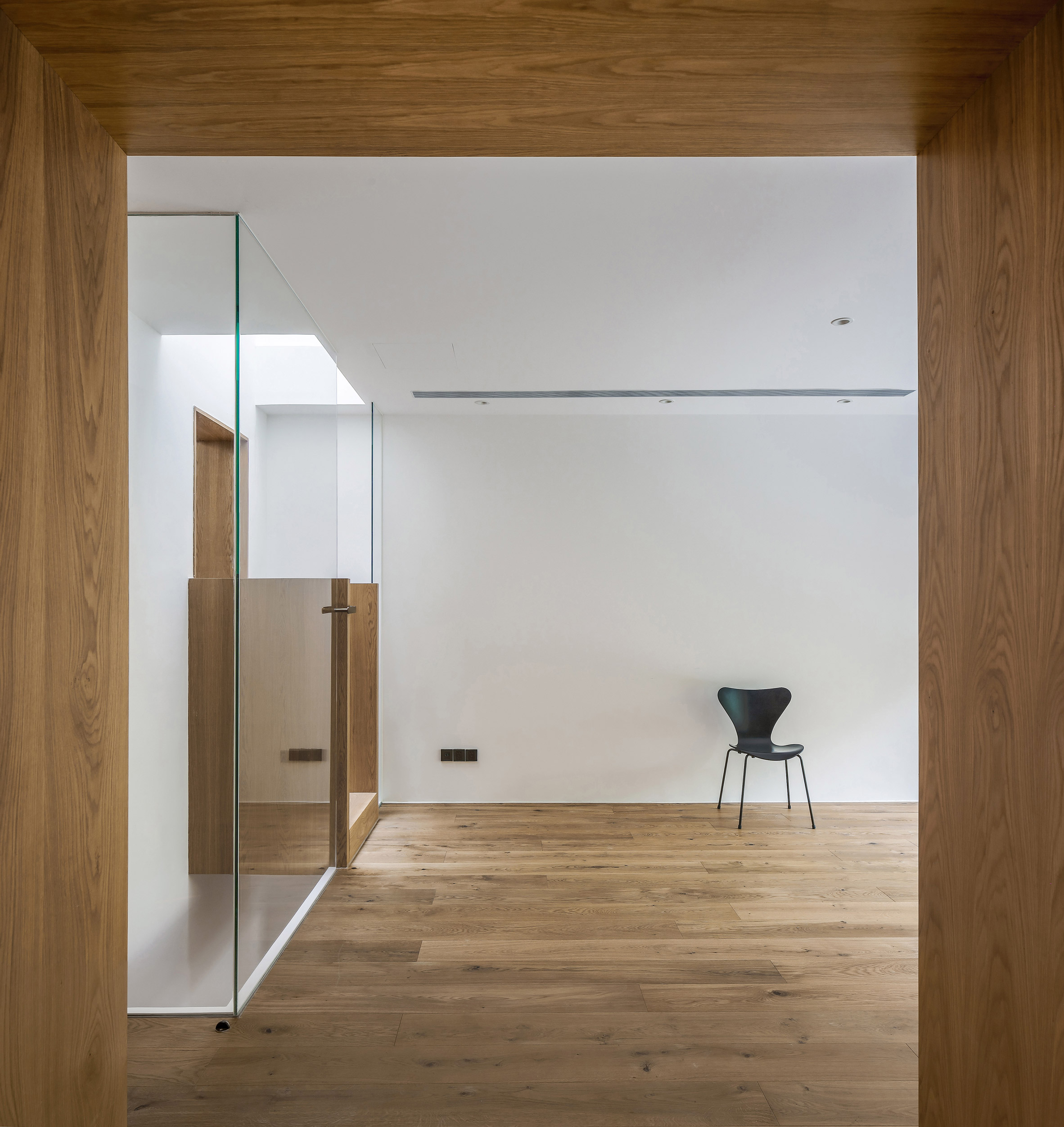 Its owners, a married couple and their elder daughter, tasked Atelier Tao+C with introducing daylight into the centre of the home.

Reluctant to disrupt the home’s 1930s framework, the architects decided to take a “discreet surgical approach” to their intervention. 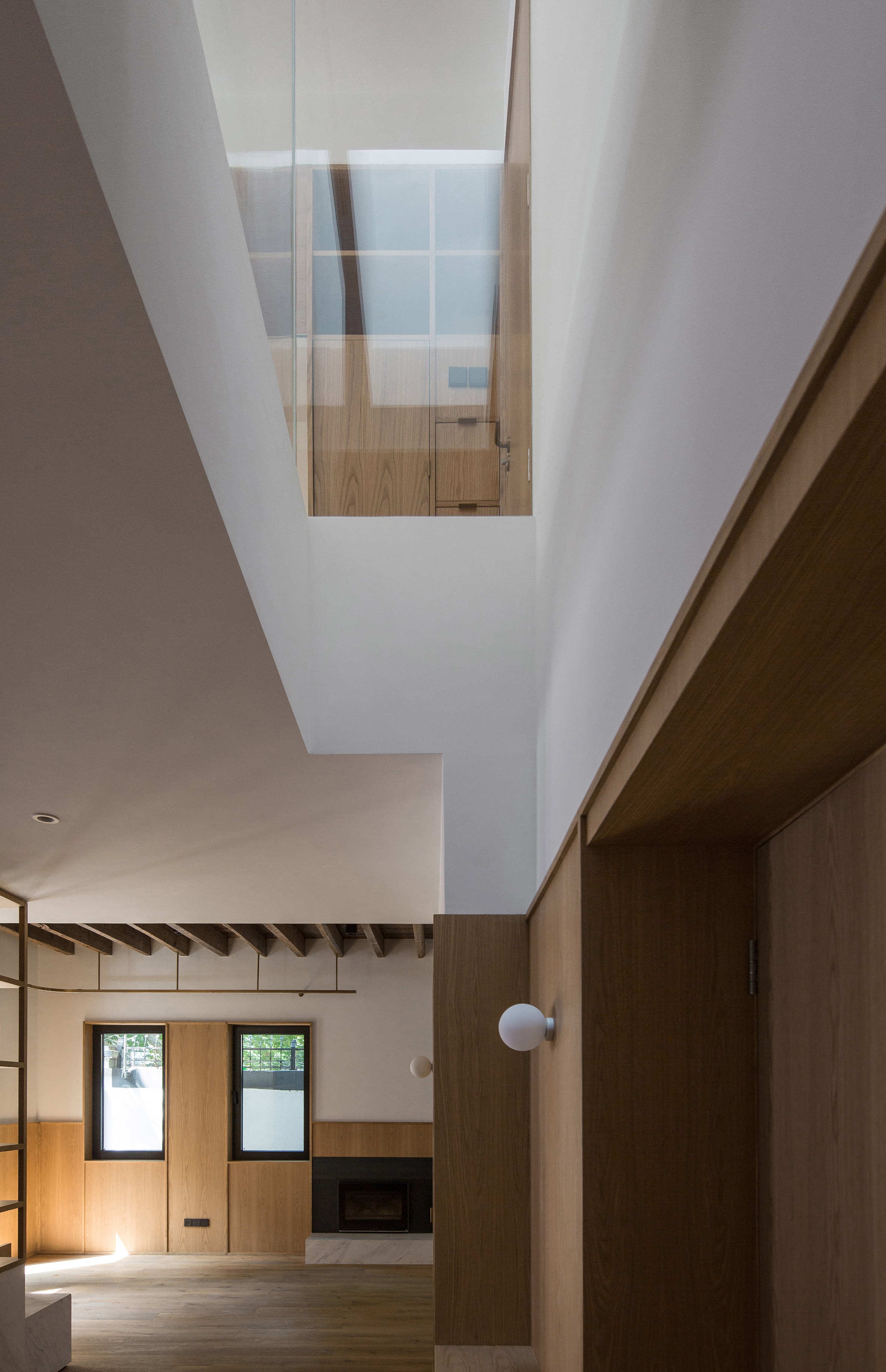 They began by carving out a slender lightwell between the two wings the property is split into, lending the project the name House With A Tiny Patio. The vertical glass shaft extends up from the first floor to a rooflight.

Rooms in one side of the house are set half a level above the rooms in the other, and the lightwell provides a visual connection between the spaces in addition to illumination. 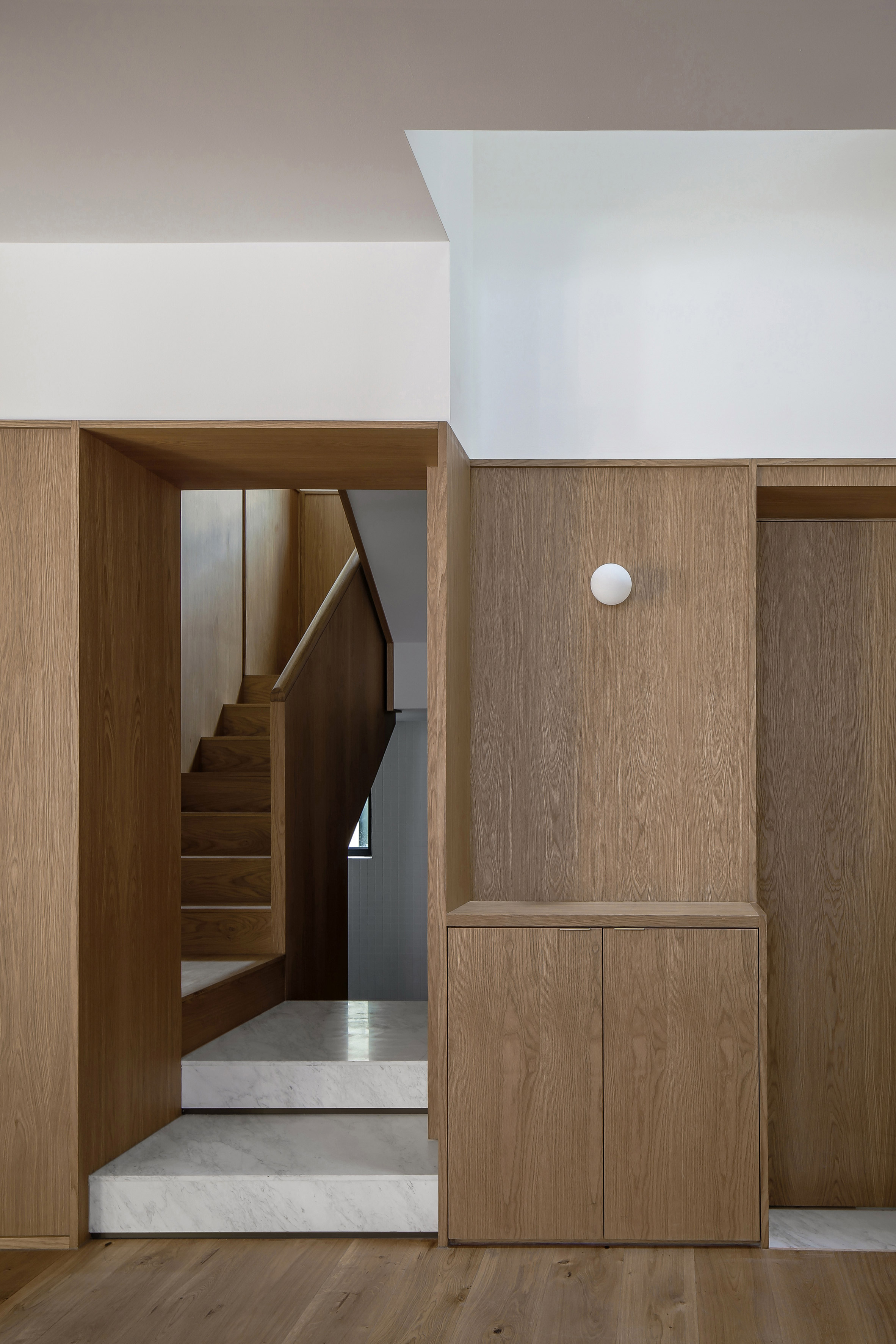 A short bridge has also been made to pierce through the light well at the first floor, connecting a previously walled off bedroom to main living areas.

“The project evokes a sense of southern Chinese vernacular dwelling with modern architectural language,” said a statement from the practice.

“Implanting such a light shaft allows the celebration of air and light and also interweaves the split floors, enriching the spatial experience of domesticity.” 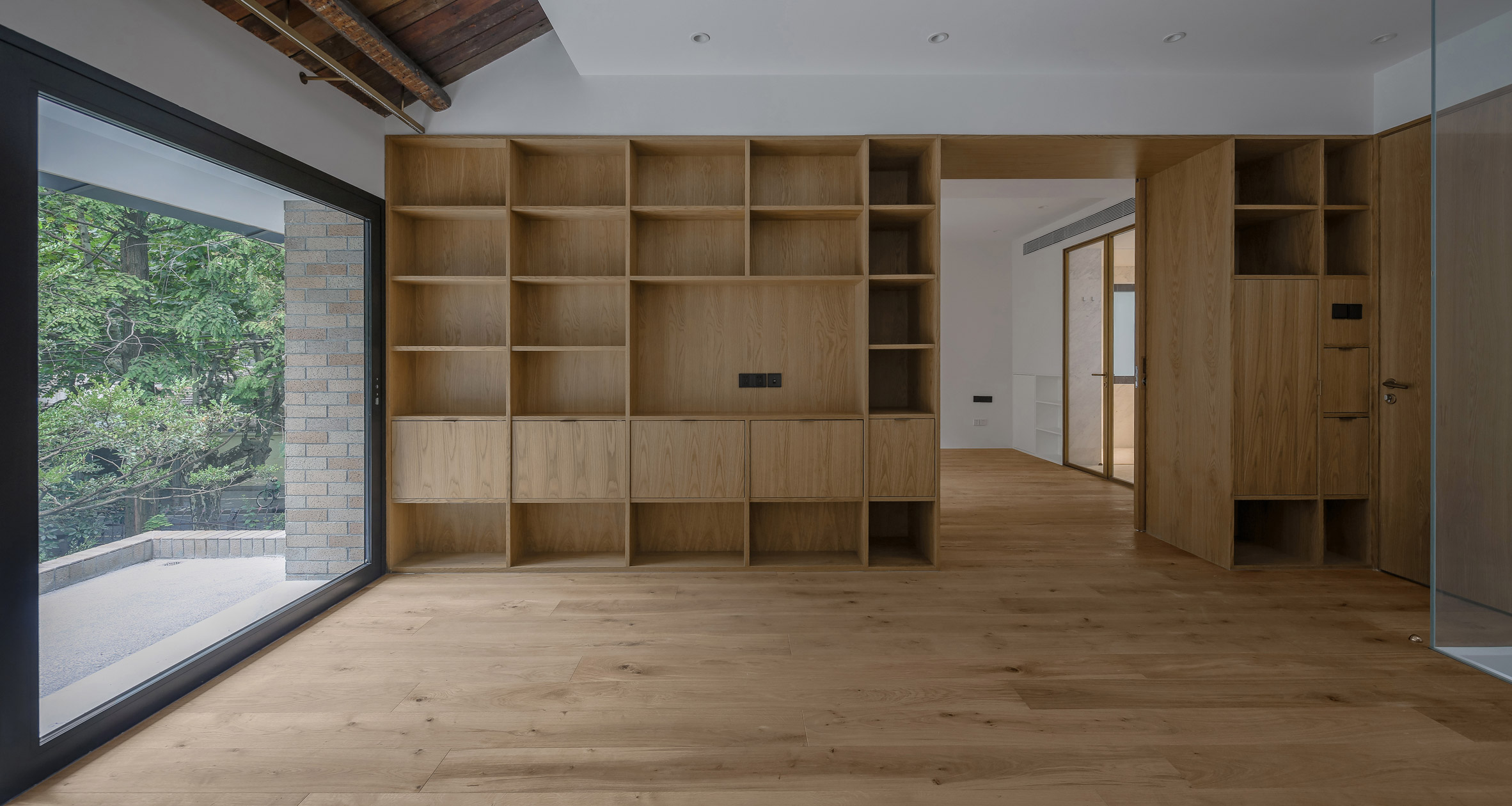 Panels of warm-hued oak have been used to clad the dog-leg staircase and walls, several of which feature integrated storage units.

But portions of the house’s original dark timber ceiling beams have also been left exposed in the living area and bathrooms.

The architects have otherwise kept to a simple material palette of white paint, pale marble, and brass, intended to create a calm and relaxed atmosphere. 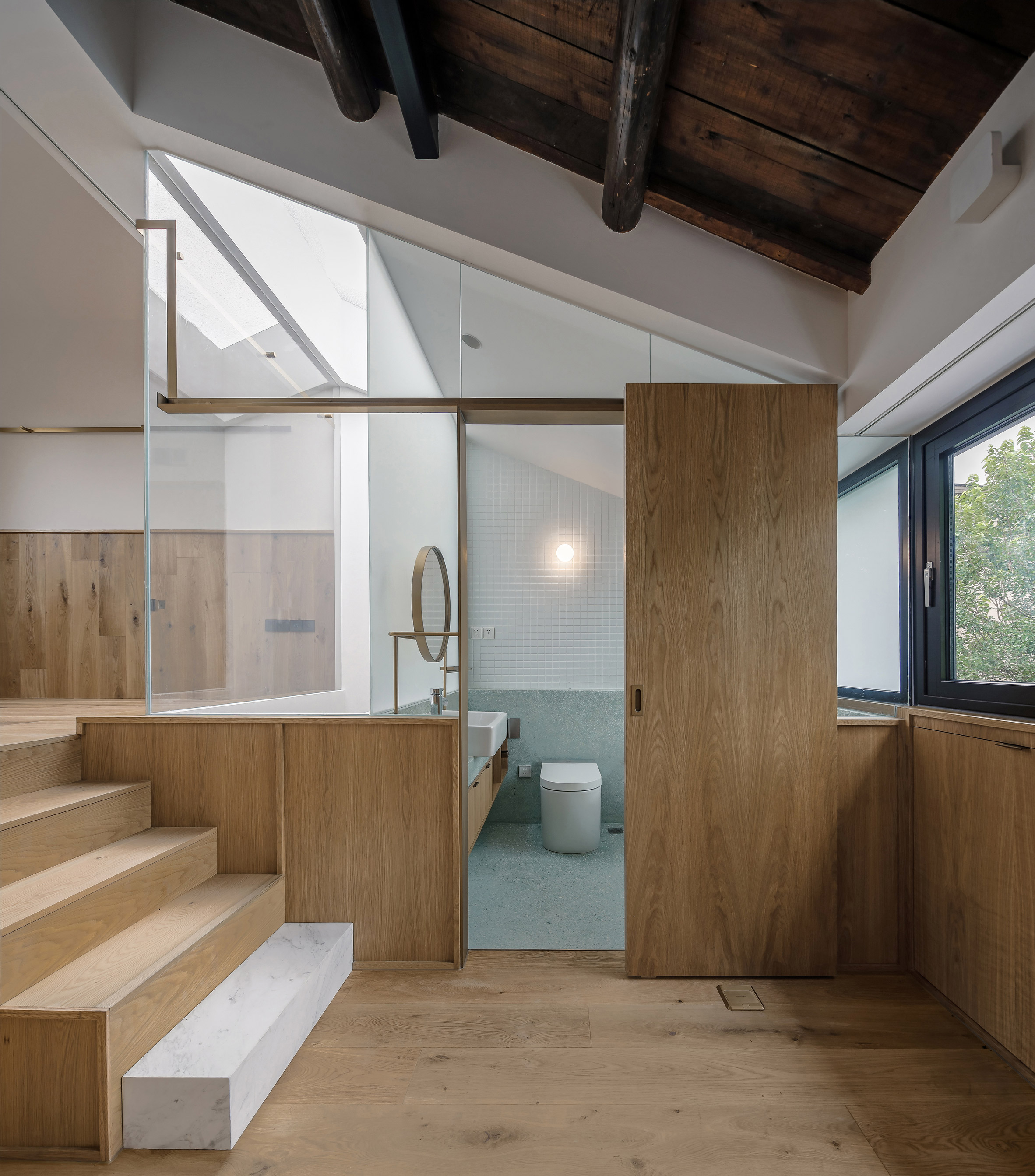 Atelier Tao+C have previously completed another project in the French Concession, transforming a top-floor apartment into one enormous home library by adding bookshelves all around its perimeter.

Photography is by Su Sheng Liang.