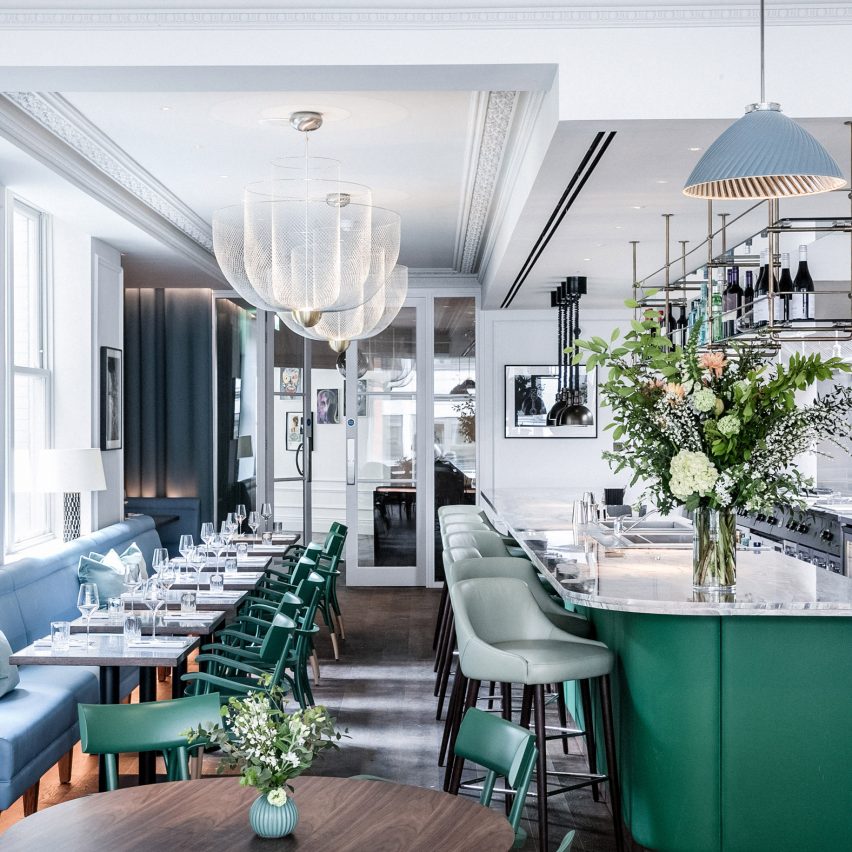 Woman-only member’s club Allbright has opened a venue in London’s Mayfair with work exclusively by female artists across its five floors.

The townhouse on Maddox Street is the second outpost of the club. The interior design was completed by Suzy Hoodless, with art chosen by curator Beth Greenacre. 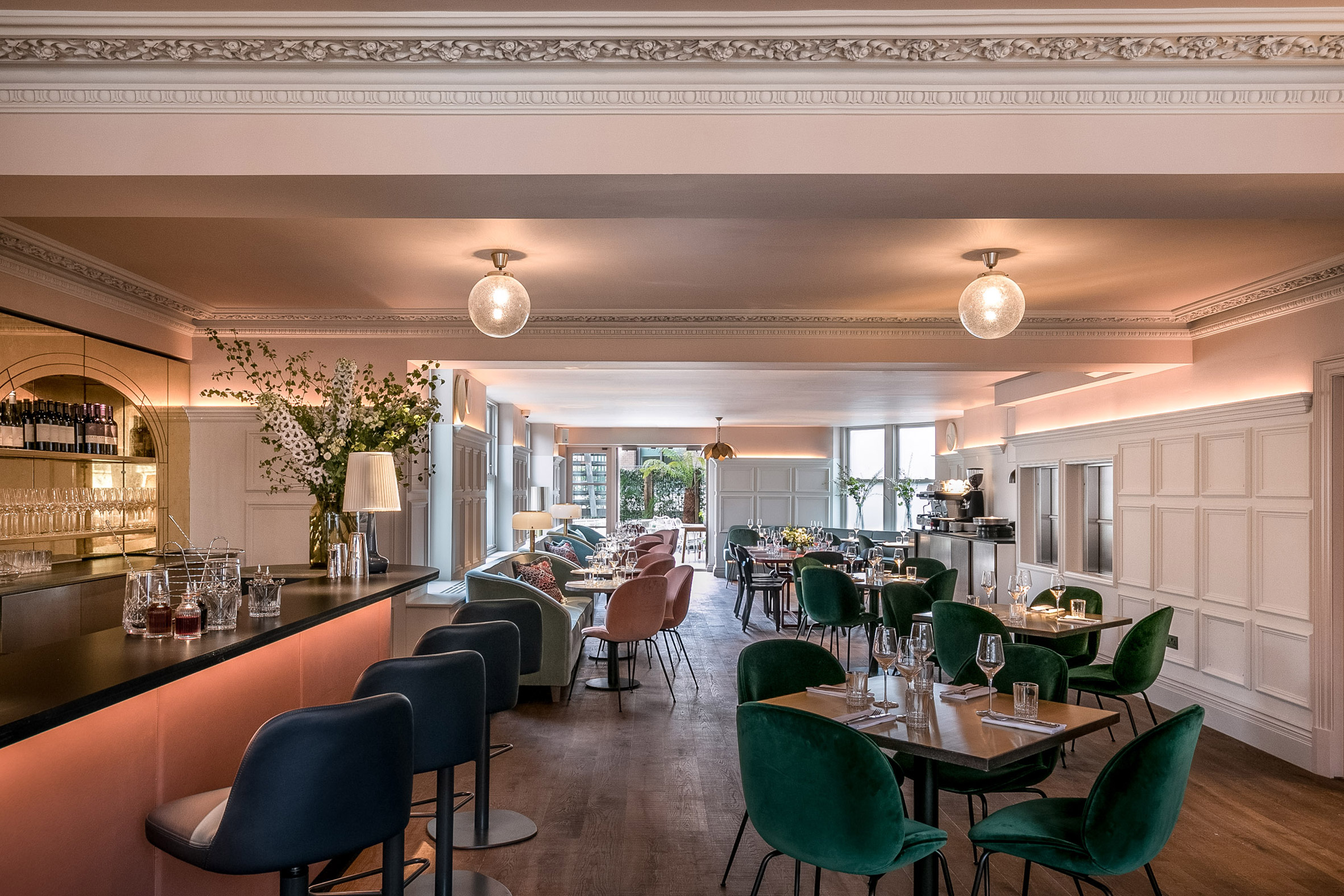 “It goes without saying that it’s only female artists. It’s an interesting proposition thinking about female artists and content for a female audience,” said Greenacre. 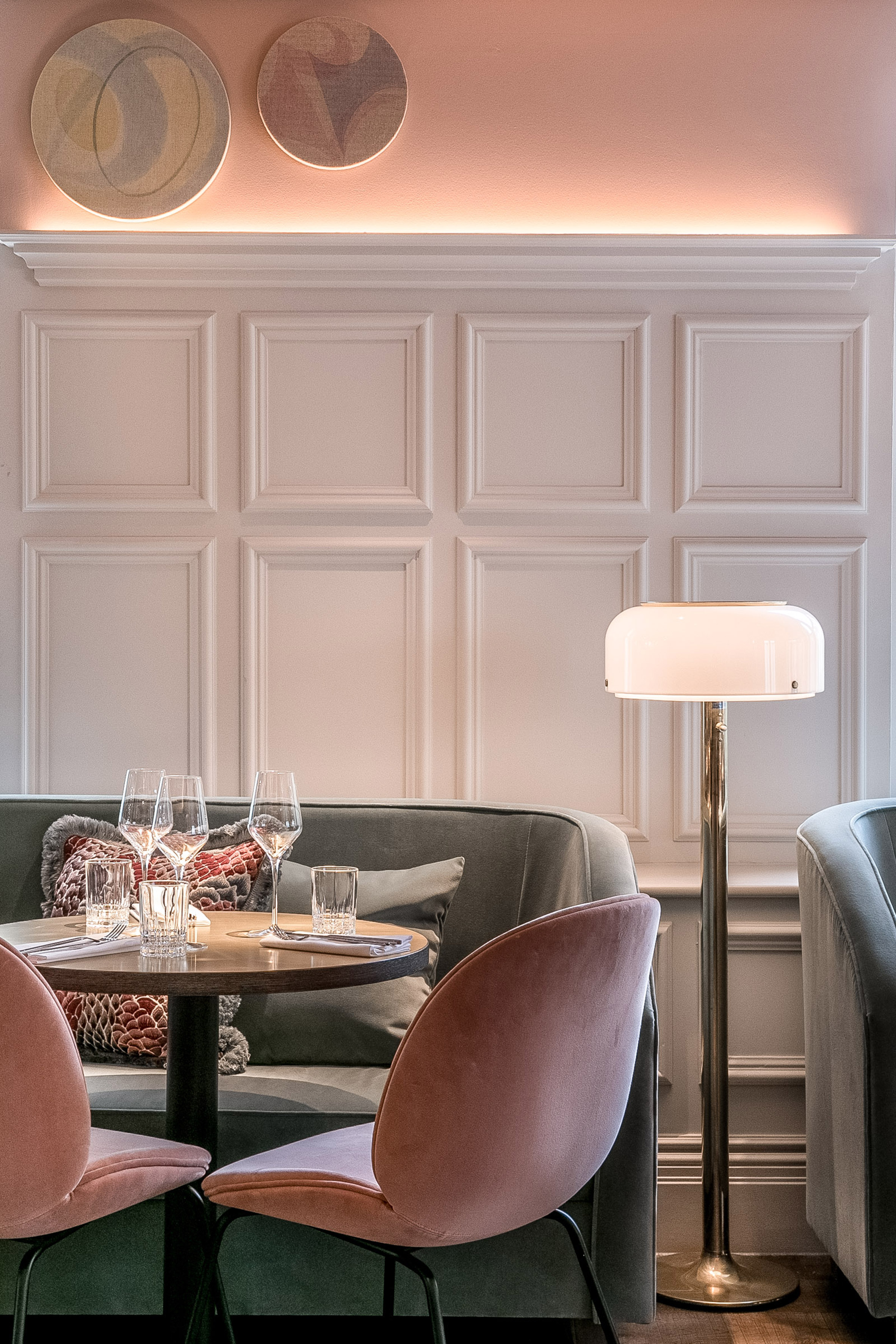 Work on show ranges from acclaimed midcentury photographer Diane Arbus, whose 1961 photograph Headless Woman hangs on the third floor, through to contemporary working artists such as Alexi Marshall, who graduated from the Slade School of Fine Art last year.

“It’s really important to give them a platform and to give them an audience and to hang them next to art historical stars,” explained Greenacre. 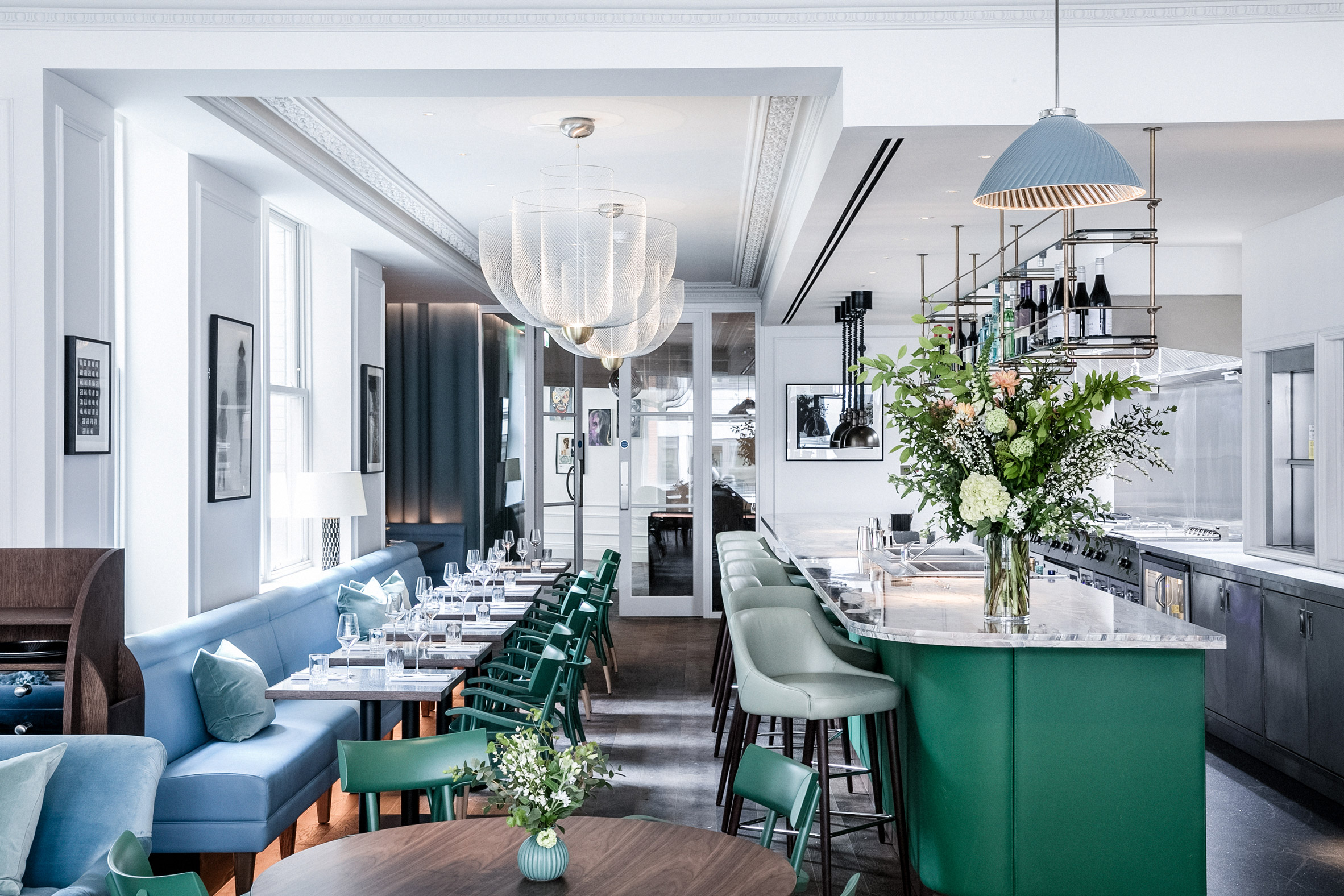 Greenacre sat down with interior designer Hoodless at an early stage to “understand the aesthetic that Suzy’s working towards and her vision” for the space.

Together they looked at colours, patterns and materials to ensure that the art responded to the overall design. 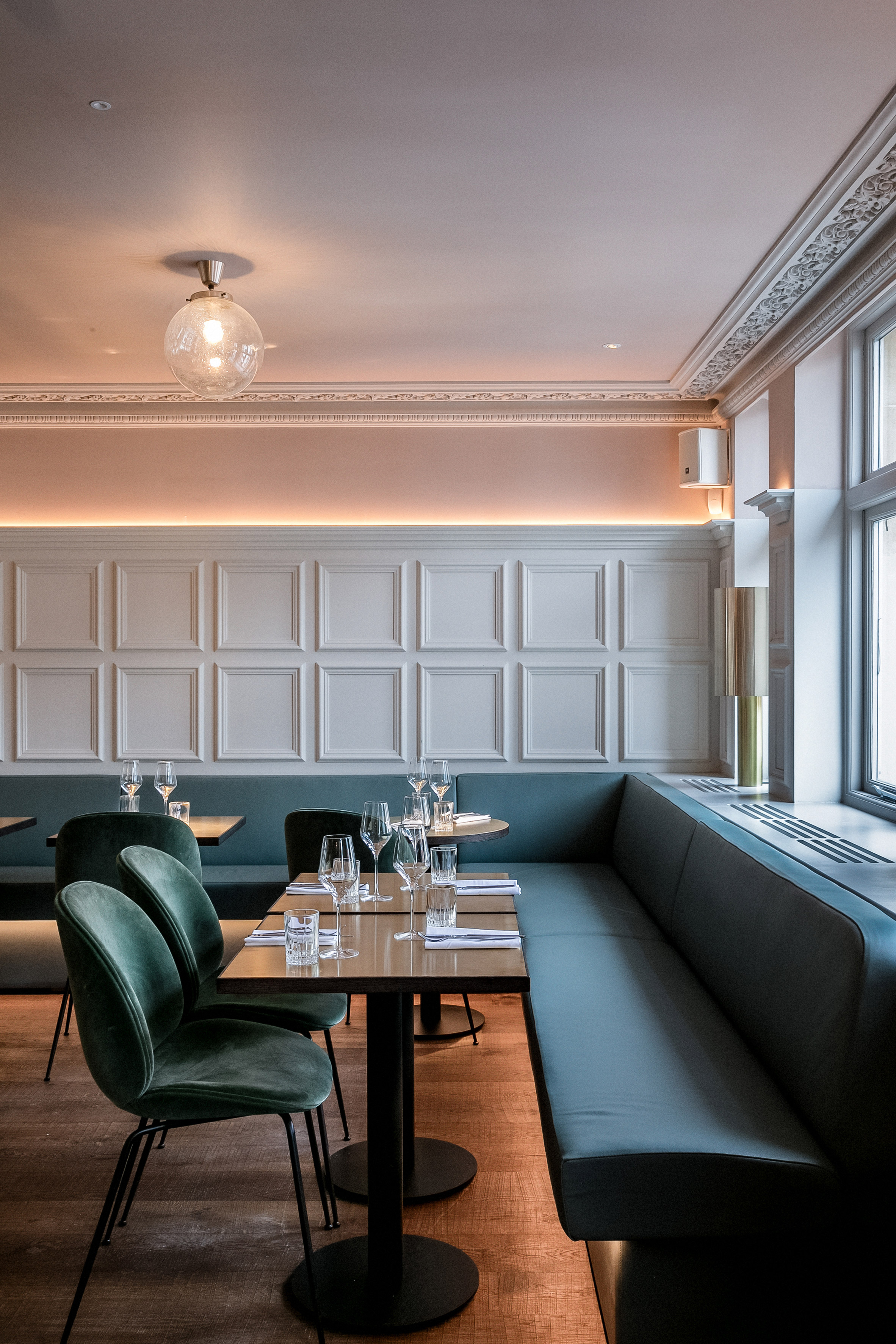 The brief given to Hoodless by the founders of Allbright was to create an interior that was “feminine but not girly”, which made the female members comfortable but would not alienate their male guests.

The building used to be the headquarters of an auction house, so they wanted to reflect that history in the design.

“Suzy’s aim was to restore the building into an elegant London townhouse using a palette of timber floors and panelled walls which would resonate with the art world in which it resides,” said Anna Jones, co-founder of Allbright. 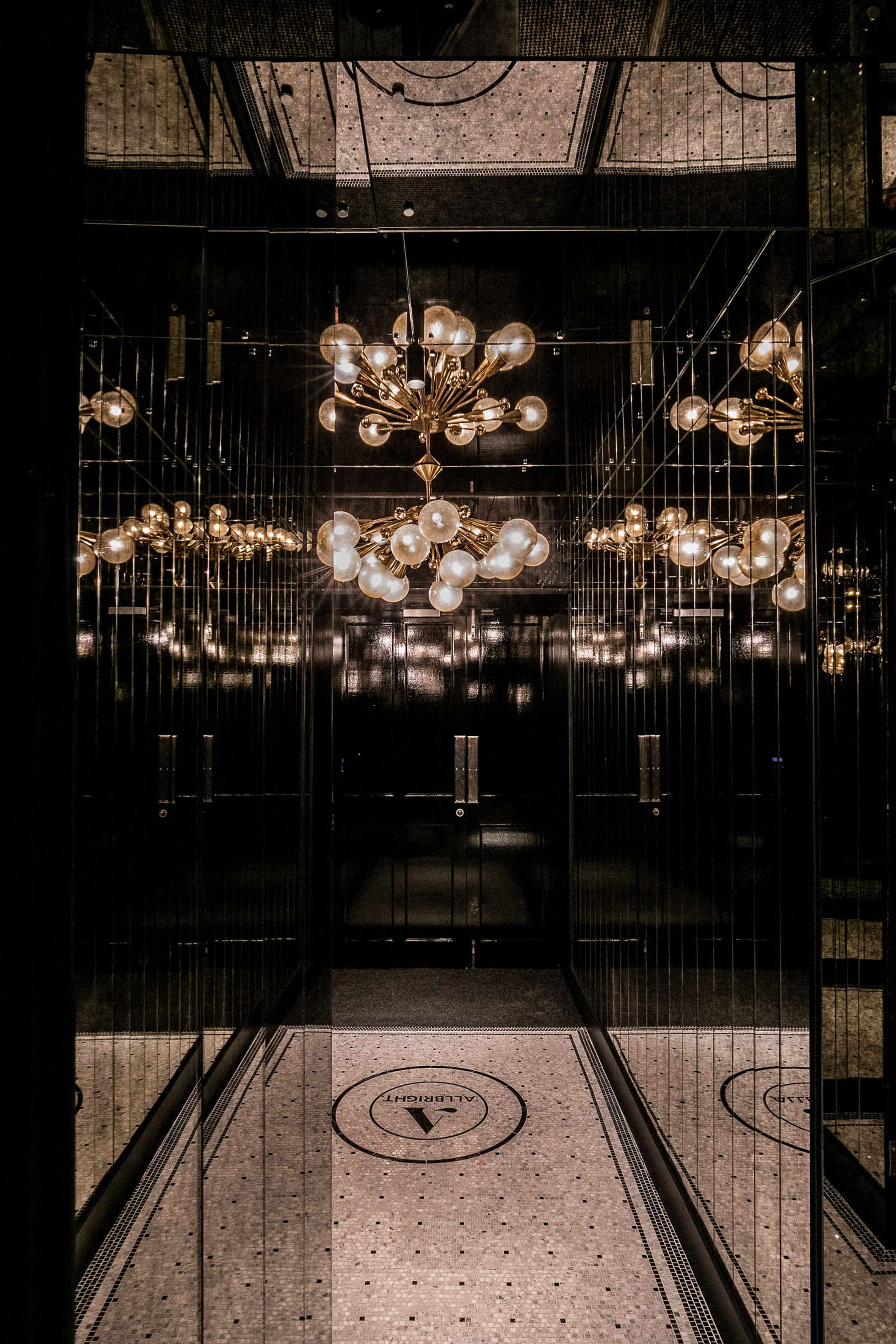 A marble-topped bar is upholstered in a matching green with high-bar stools in a paler green shade. 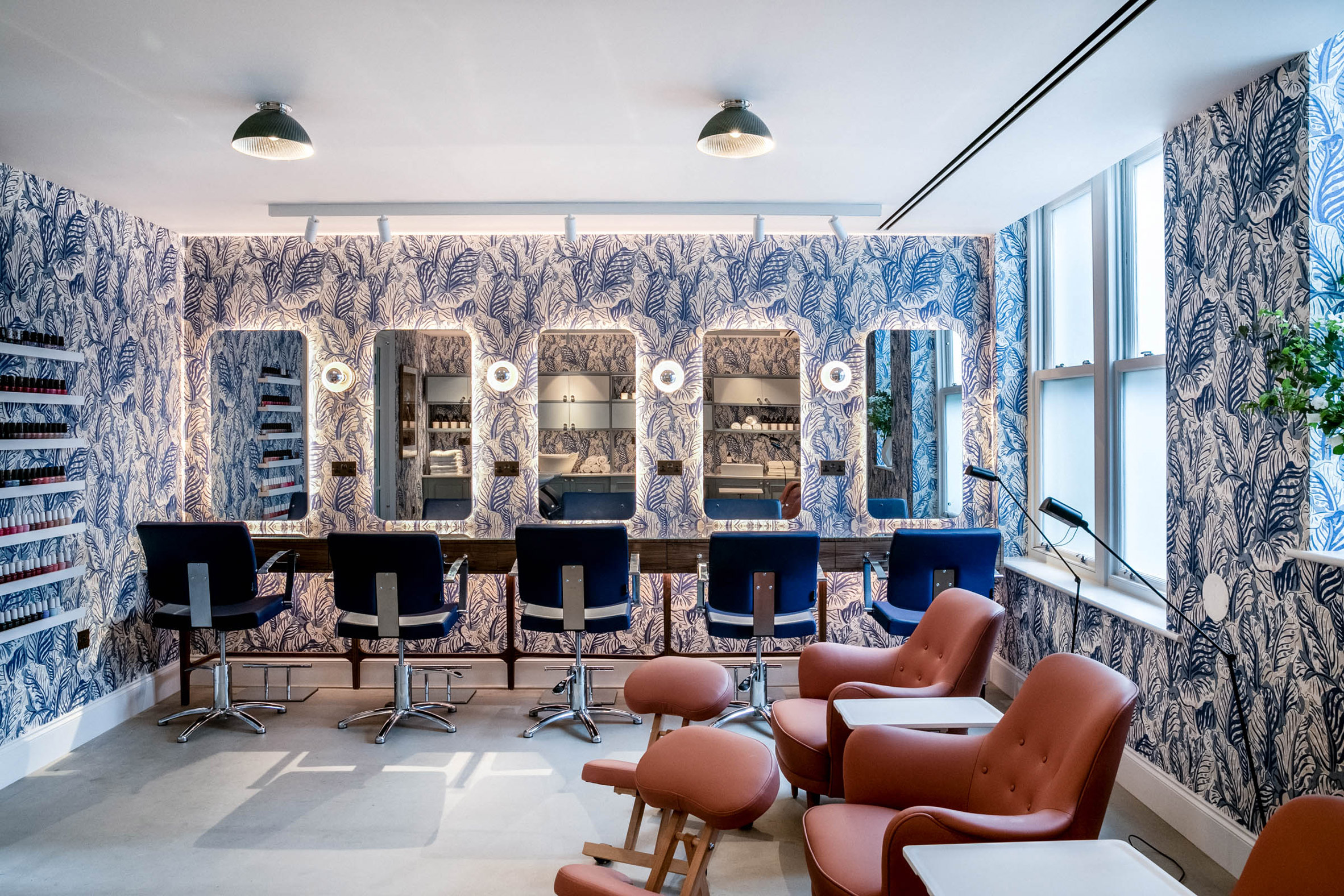 The floor above is devoted to wellbeing, with a fitness studio, treatment rooms and a hair salon with bold wallpaper depicting blue leaves.

The print is a Christopher Farr Cloth reissue of the Mille Feuille wallpaper originally designed by Raoul Dufy.

Hairdressing chairs in front of wall-hung mirrors are upholstered in matching leather, with standard salon chairs for manicures and pedicures replaced with comfortable button-back armchairs with matching foot rests. 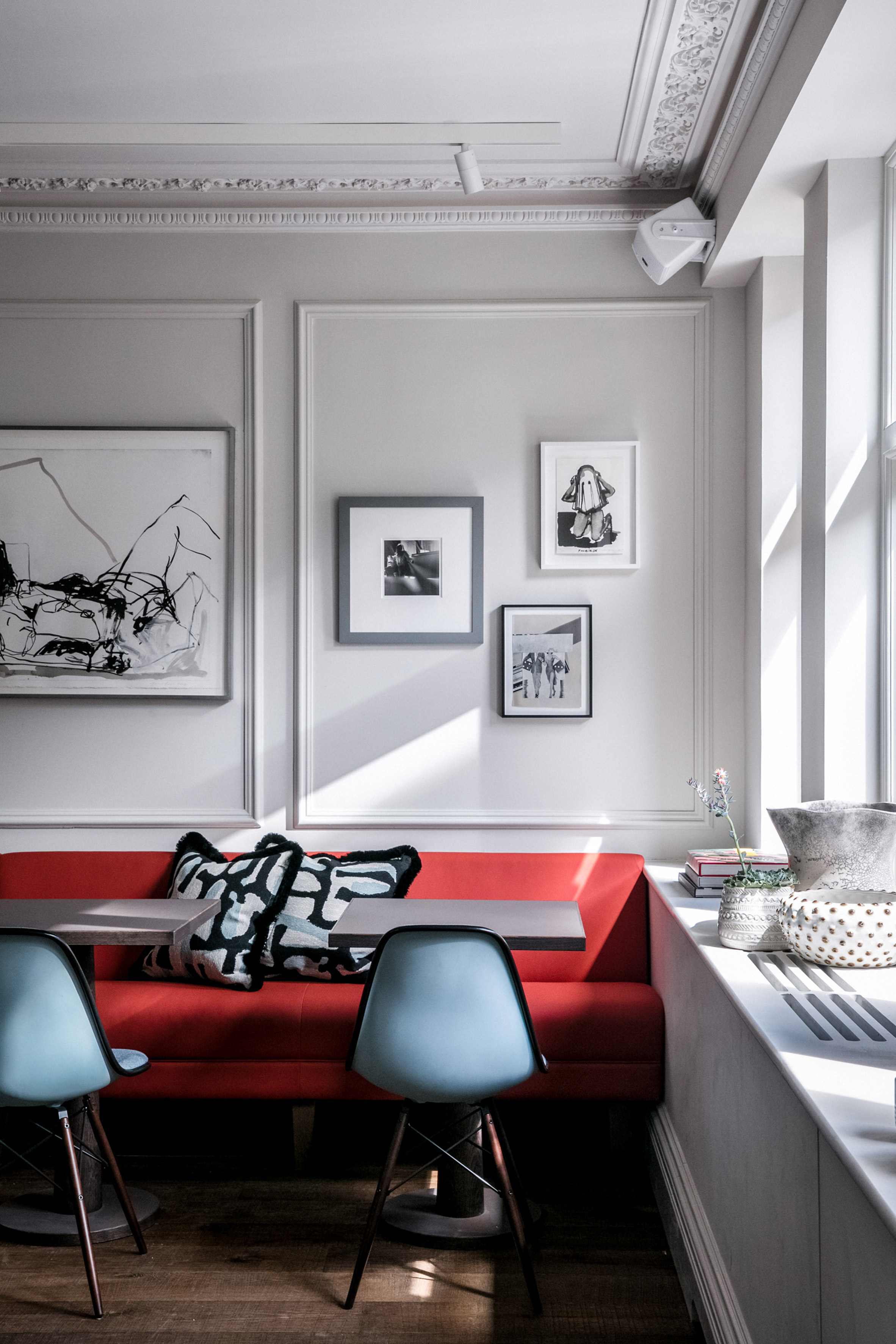 The third floor is a co-working space. This walls of this area will be used as a blank canvas for artist installations.

A mixture of hidden-away seating for one and round tables allows for flexible working, or gatherings such as book or wine groups. 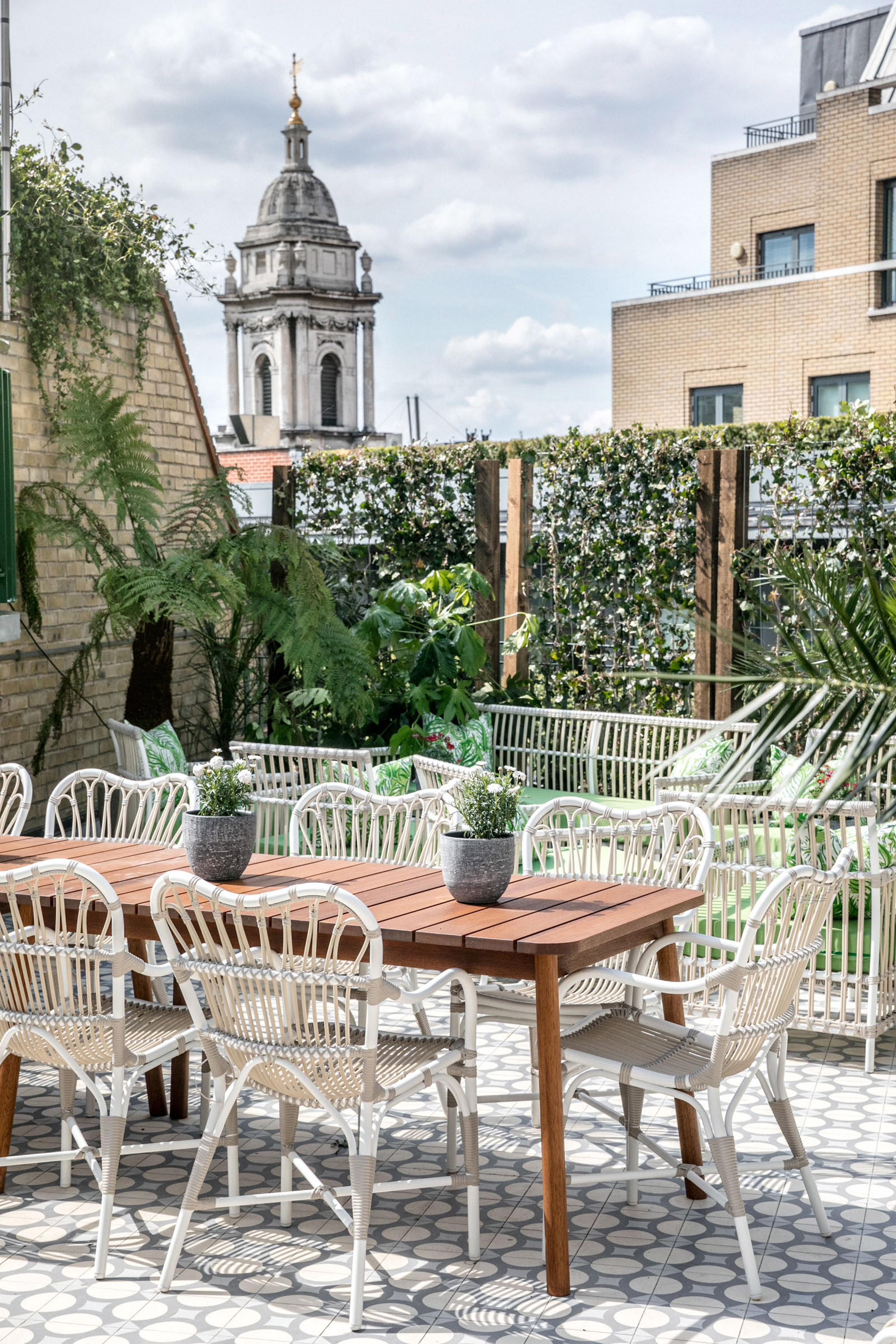 Up one level is an all-day restaurant and bar with access to a tiled outdoor roof terrace. Dining chairs are upholstered in soft pink and green velvet and set around intimate tables.

The pink tones follow through to the upholstered leather bar. The bar itself is backed with mirrored gold panels with bottles stored on shelves in inset arches. 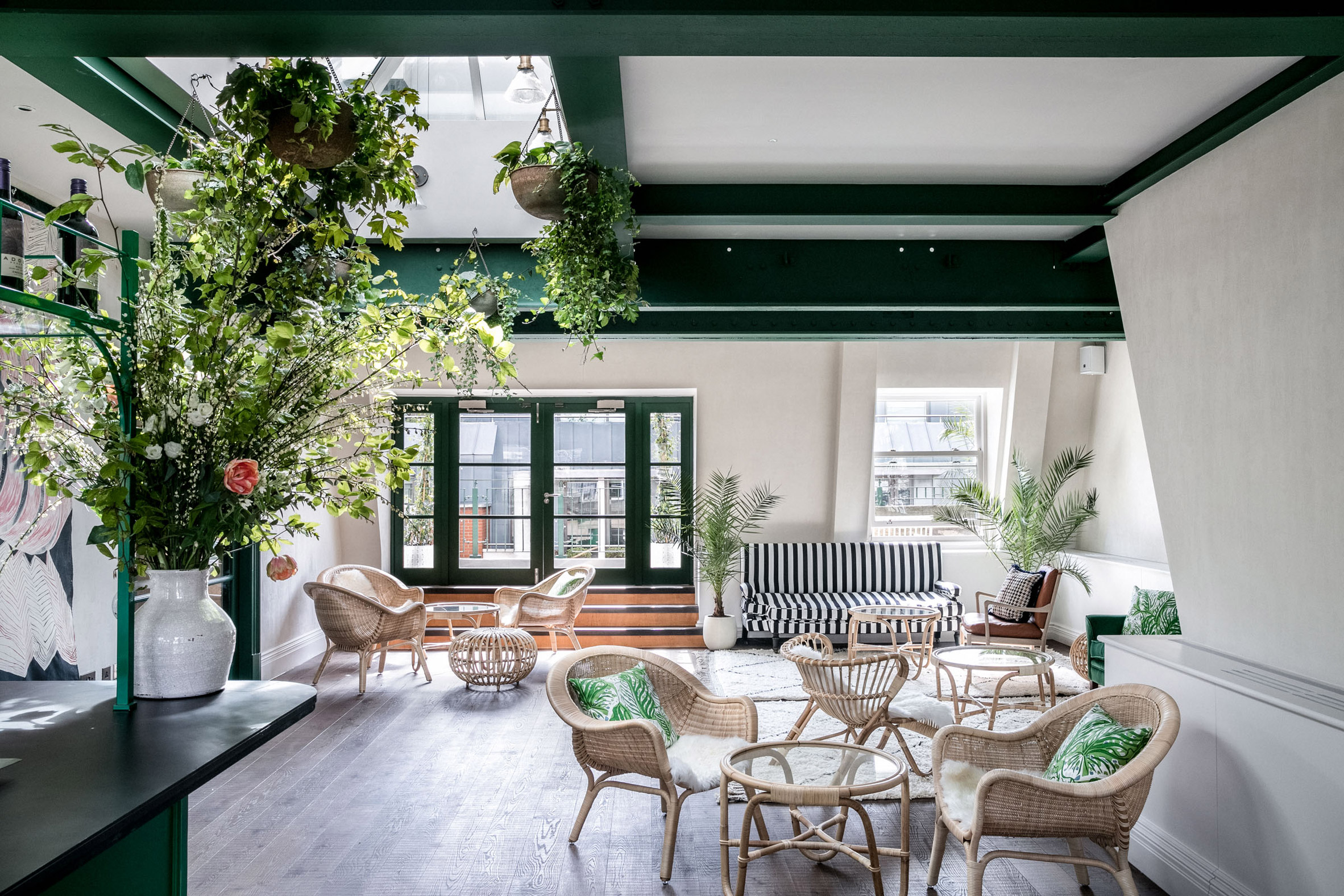 On the fifth floor, a loft-style events space, bar and further roof terrace is modelled on the idea of a glasshouse with plants set against plastered walls.

Rattan furniture gives the feeling of a hybrid indoor-outdoor space, with ceiling beams and door surrounds picked out in green. 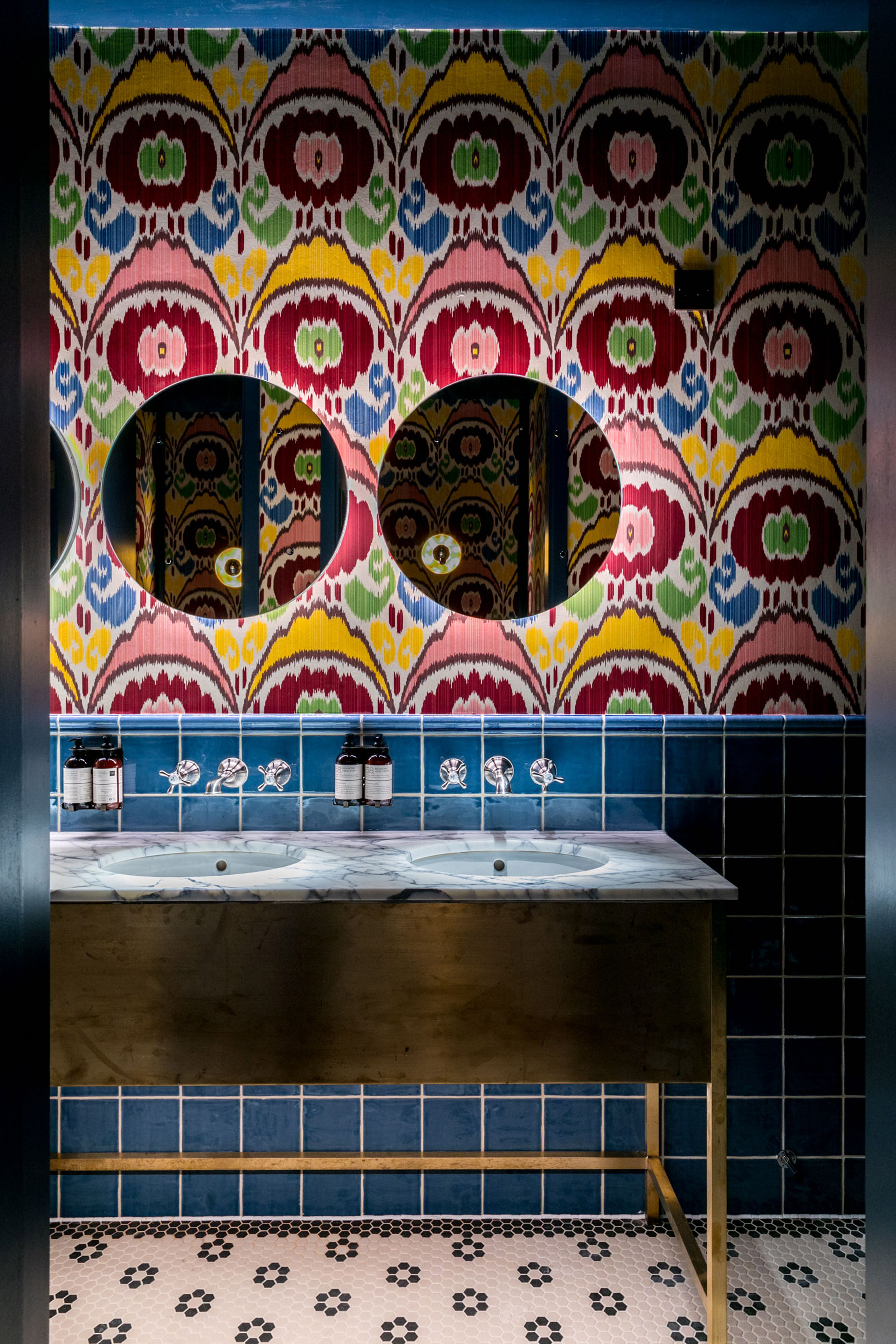 In one, a large-scale ikat print is offset by bright blue tiles, whilst another features a stylised dragon print by Clarence House with wall tiles in multiple colours and tiled floors. A further bathroom is painted gold with pink accents.

The Maddox Street club follows the initial opening on Rathbone Place just north of Oxford Street, last year. The club is intended to provide a female-friendly haven for members in central London, although male guests are admitted.

“For the interiors, Suzy was inspired by the club’s proximity to Savile Row which is traditionally associated with bespoke tailoring for men,” explained Jones.

“However, Suzy wanted to emphasise its relevance for women by incorporating traditional suit fabrics, such as fine wools and houndstooth checks into the design, creating a feminine and imaginative twist.” 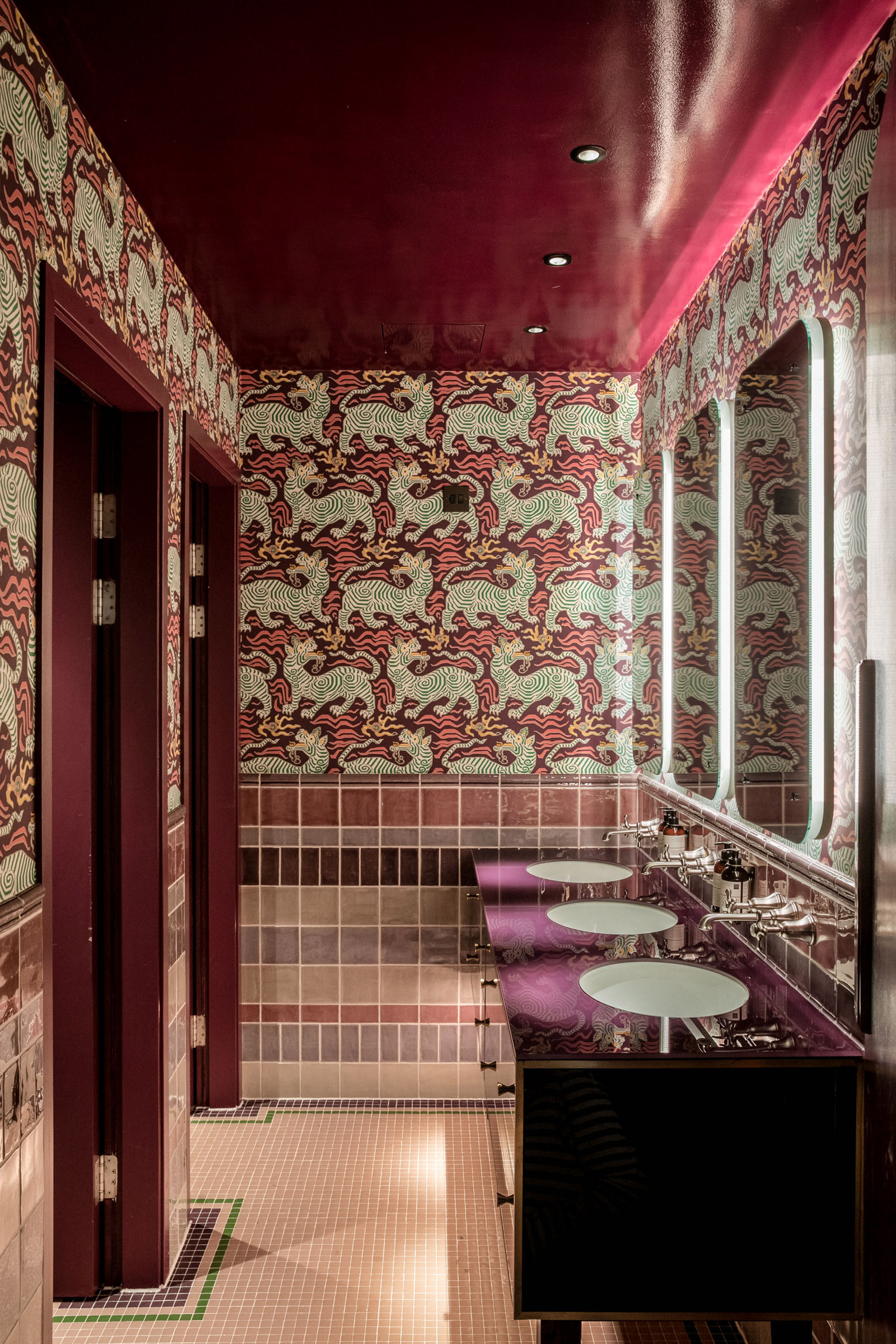 Dezeen reported last year that a flurry of woman-only members clubs in Seattle, Toronto, London and New York was helping to build on the recent success of equal rights campaigns.

At the time, Amy Nelson of Seattle club The Riveter said: “There is power in women having a collective voice, and sharing stories in a way that has impact and affects change”.

The post Allbright opens Mayfair club with all-female art on the walls appeared first on Dezeen.